COVID-19: Five million people have now died from coronavirus across the globe 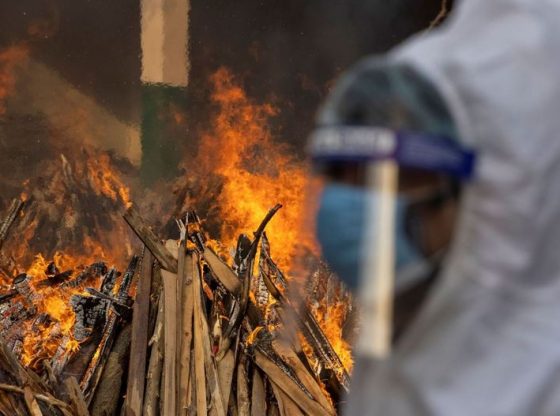 The data from Johns Hopkins University, which has been tracking the outbreak, also shows more than 246 million COVID-19 cases have been reported.

It comes less than two years into the crisis, with coronavirus cases reported in more than 210 countries and territories since the first cases were reported in Wuhan, China, in December 2019.

The virus is now the third leading cause of death, after heart disease and stroke.

Dr Albert Ko, an infectious disease specialist at the Yale School of Public Health, said: “This is a defining moment in our lifetime.

“What do we have to do to protect ourselves so we don’t get to another five million?”

The crisis has not only devastated poor countries but also humbled wealthy ones with top healthcare systems, despite testing programmes and vaccine rollouts.

Together, the US, the European Union, UK and Brazil – all upper-middle or high-income countries – account for one-eighth of the world’s population, but nearly half of all reported deaths.

The death toll in the United States alone, which has suffered more fatalities than any other country, now stands at more than 745,000.

The five million figure is almost certainly an undercount due to limited capacity for coronavirus testing, particularly in poor parts of the world, and a significant number of deaths at home because hospitals have been overwhelmed.

Dr Wafaa El-Sadr, director of Icap, a global health centre at Columbia University, said: “What’s uniquely different about this pandemic is it hit hardest the high-resource countries. That’s the irony of COVID-19.”

Wealthier nations with longer life expectancies have larger proportions of older people, cancer survivors and nursing home residents, all of whom are especially vulnerable to COVID-19, she noted.

Infections are on the increase in Russia, Ukraine and other parts of Eastern Europe, while lockdowns are being lifted in other parts of the world, with Australia opening its border for the first time in 20 months.

Wealth has also played a role in the global vaccination drive, with rich countries accused of failing to share supplies – though some already have, or have pledged, to ship millions of doses to the rest of the world.

Booster programmes have been launched by the UK and others – when millions in Africa are yet to be jabbed. Just 5% of the population of 1.3 billion people have been fully vaccinated.