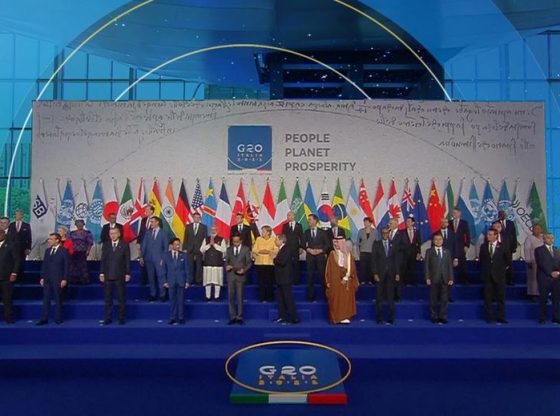 Major economies are not doing “their fair share” in tackling climate change and there are “no compelling excuses for our procrastination”, Boris Johnson has said.

Speaking as the G20 summit in Rome came to an end, the prime minister struck a gloomy, slightly angry tone, describing progress as a “question of will and leadership”.

Only 12 of the world’s 20 largest economies have committed to reaching net zero carbon emissions by 2050 or earlier, he said.

With the COP26 climate conference in Glasgow now officially under way, Mr Johnson said there was a risk that in future, the Paris climate agreement of 2015 would be known not as the “moment humanity opened its eyes to the problem” but “the moment we flinched and turned away”.

It was agreed in Paris that temperature rises above pre-industrial levels should be kept to below 2C, and preferably no more than 1.5C.

There is a danger that COP26 will be a damp squib, the PM added, putting the chances of success at “about six out of 10 – it’s nip and tuck, it’s touch and go”.

He continued: “We could do it or we could fail by the middle of November. If Glasgow fails then the whole thing fails – Paris will have crumpled at the first reckoning.”

At present, the Paris agreement and the “hope that came with it is just a piece of paper”, he said, adding that citizens “want us to fix this”.

Referring to the G20 gathering, the prime minister said it had been no more than “reasonable” and there was still “a huge way to go”.

In terms of agreeing measures to stop warming of more than 1.5C, the PM said it was “very much in the balance”.

He went on: “Currently we are not going to hit it and we have to be honest with ourselves. We’ve got to keep that hope alive. The science is clear that we need to act now to halve emissions by 2030 and keep 1.5C within reach.”

Progress on the domestic use of coal “can be done”, Mr Johnson said, but he warned that less developed countries are “going to need help” from richer ones.

Earlier, the UN secretary general said he was leaving Rome with his “hopes unfulfilled” after G20 leaders failed to agree on a solid commitment to tackle climate change.

Leaders of the world’s 20 largest economies agreed that keeping global warming down to 1.5C above pre-industrial levels will require “meaningful and effective actions and commitment by all countries”.

They did not expand on what those actions could be and said they recognised the relevance of halting net emissions “by or around mid-century” – removing the 2050 date seen in previous versions of the final statement to make the target less specific.

The leaders did agree to end public financing for coal-fired power generation abroad but set no target for phasing out coal domestically.

The lack of agreement over the domestic issue relates directly to top carbon polluters China and India – and represents a failure by leaders to agree on a key issue.

UN Secretary General Antonio Guterres, who warned on Friday the world was rushing headlong towards climate disaster, said: “While I welcome the G20’s recommitment to global solutions, I leave Rome with my hopes unfulfilled – but at least they are not buried.

“Onwards to COP26 in Glasgow to keep the goal of 1.5C alive and to implement promises on finance and adaptation for people and planet.”

A spokeswoman for sustainable development advocacy group Global Citizen said the lack of a definitive timeline “is not good enough”.

“That the G20 didn’t align on this basic fact is close to negligence for both people and the planet,” she said.

And she also expressed anger at the leaders failing to commit any urgent aid to help Madagascar, which is on the verge of declaring the first famine caused by climate change after four years without rain.

Wrapping up two days of talks in Rome, the group of 20 leaders had been looking to find common ground and definitive commitments on how to reduce emissions while helping poorer countries deal with the impact of climate change.

The 20 members, which include the UK, the US, China, India, Brazil, Russia and the EU represent more than three-quarters of the world’s greenhouse gas emissions.

Also at the G20, the US and the EU agreed to crack down on “dirty steel” that produces carbon emissions by restricting steel made in China from accessing their markets.

US President Joe Biden and European Commission President Ursula von der Leyen made a joint appearance at the end of the summit in which they said the move resolved the trade dispute started by former president Donald Trump.

Ms von der Leyen, who called the US president “dear Joe” several times, said all like-minded economies could participate in the agreement.

G20 leaders also endorsed a 15% global minimum tax on corporations, which had been agreed by G20 finance ministers in July.

The tax is aimed at minimising the ability of multinational businesses to use tax havens to gain massive profits while avoiding taxes in the countries they operate in.

But Global Citizen told Sky News “there is no plan to get there” and questioned where the doses would come from as there is still little data on vaccine production and distribution.