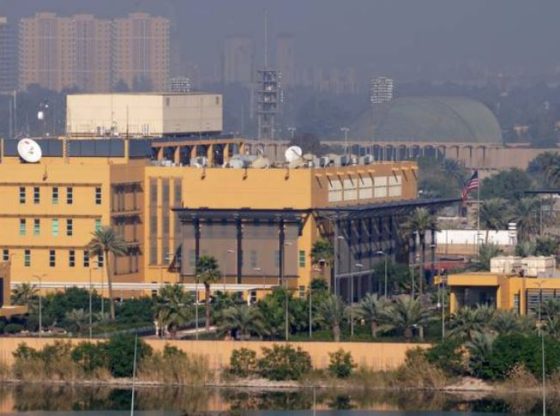 Militants launched three rockets late on Saturday towards the US embassy in Baghdad’s heavily fortified Green Zone but they missed their target, according to police.

All three were Katyusha rockets – a rail-mounted weapon based on a Second World War-era Soviet design. They were fired from the Bayaa district, a Shiite area in south-western Baghdad, a police officer said.

Two of the rockets landed on the streets of the upmarket Mansour district while the third landed in Al Harithiyah.

They missed the Green Zone, home to important government offices and western embassies, the officer said. There were no casualties reported.

No group has claimed responsibility for the attack. But the Sabreen news channel on Telegram, which is affiliated with Iran-backed Shiite militias, was the first to report the attack.

Some analysts have linked Sabreen to Asaib Ahl Al Haq, a notorious militia formed with Iranian backing in 2006.

Shortly after defeating ISIS in late 2017, pro-Iranian militias and politicians began to call for the withdrawal of US troops from Iraq.

Tension escalated after the January 2020 assassination of Iranian military commander, Qassem Suleimani, whose convoy was blown up in a US drone strike shortly after he landed at Baghdad airport.

The influential leader of the Kataib Hezbollah militia, Abu Mahdi Al Muhandis, was also killed in the attack.

Iran-backed groups and members of the Islamic Revolutionary Guard Corps in Tehran were quick to promise revenge.

Since then, militias have been staging almost daily rocket and bomb attacks against American troops, the US embassy and convoys supplying international coalition bases.

In October last year, a ceasefire was announced by a group of powerful Iran-backed militias to allow the withdrawal of US forces. But the militias have not honoured their promise.

During the past 18 months, the number of American forces in Iraq has been reduced from about 3,000 to 2,500. Remaining personnel continue to protect the US embassy and train Iraqi forces.

Iraqi Prime Minister Mustafa Al Kadhimi visited Washington in July, a trip which concluded with an agreement to formally end the US combat mission in Iraq by the end of this year.

However, Washington has said repeatedly that its troops will still operate in the country on an advisory basis.