Inforial People advised to stay alert as pandemic not over 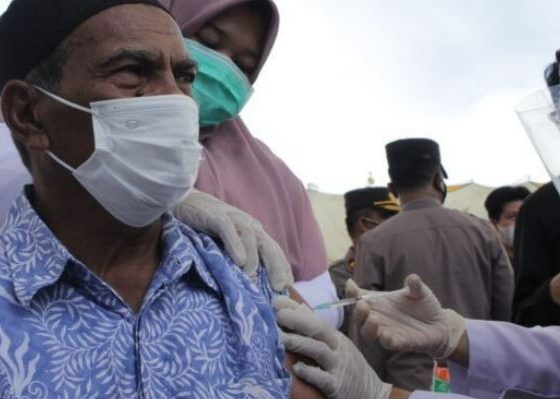 The government has been constantly reminding people that the pandemic is far from over. The COVID-19 virus situation is still dynamic on a global scale. Therefore, health protocol discipline remains mandatory and vaccination targets still need to be met. Government COVID-19 vaccination spokeswoman Siti Nadia Tarmidzi said the COVID-19 global situation had provided a broad lesson on how to deal with pandemics. According to a World Health Organization (WHO) report, as of Oct. 26 there was an increasing number of positive cases and deaths globally. “One of the factors that triggered the soaring number of COVID-19 cases was the rush of loosening of regulations and decreasing health protocol discipline, like wearing masks, maintaining distance and washing one’s hands,” Nadia said.

Indonesia, she went on, could learn a valuable lesson: that being vaccinated alone was not enough; it had to be flanked by the application of strict health protocols. Given the upcoming holidays of Christmas and New Year, she said, there would be a potential increase in mass mobility, and it could open Pandora’s box once more, leading to another spike in cases or even a third wave. “We could prevent that from happening by keeping mobility below 10 percent, just like the 2020 Christmas and New Year holidays and the post-2021 Idul Fitri holiday season,” she said. To date, she added, 105 regencies or cities in 30 provinces had experienced increases in cases within the preceding seven weeks. This should raise collective alert given that Indonesia has been on the right track in lowering COVID-19 transmission as much as possible. Nadia also encouraged people to get vaccinated. “We can end the pandemic if we stand united against it. History has proven that vaccines have saved the world from pandemic situations several times. Vaccination is a valuable scientific discovery,” she said. Another government spokeswoman, Reisa Broto Asmoro, who has been named Ambassador of New Habitual Adoption, also raised concerns over decreasing health protocol discipline.

“From all meeting points that have been monitored for the last seven days, restaurants ranked first with 20.6 percent and tourism venues with 9.9 percent as the two highest venues with less than 60 percent of people wearing masks. This is careless,” she said.

She said that even though the gatherings involved vaccinated people whose health statuses could be tracked through the PeduliLindungi application, people should not get too confident in gathering and making physical contact without wearing a mask. Furthermore, the target 100 percent vaccination remained unachieved. To date, the two-dose vaccination rate for vulnerable groups remains at 25 percent and the one-dose rate is 50 percent of vulnerable groups and the general public. For the 12- to 17-year-old category, just 3.1 million children have received complete vaccinations and 3.8 million have received their first shots.

“We are still persuading many of our elders to get vaccinated,” she said.

The senior citizen vaccination scope, she went on, was still far from target, since they were among the first priority groups to be targeted for vaccination. Reisa said this area had been a huge blank spot. She said if there were still many unvaccinated people in public spaces, the infection risk remained high. As long as new cases were still emerging, no matter how low, infection was still happening.

Therefore, she encouraged people to assist in the acceleration vaccination for elders, vulnerable groups and children, while maintaining health protocol discipline by wearing masks, maintaining distance, washing their hands with running water. She also suggested that people to reduce their mobility and avoid crowds.

“The pandemic is still around, and it will not end by itself, so our collective efforts will be needed to keep the virus at bay,” she said.