As Prakash Jha’s Aashram comes under attack, here’s a look at controversial ‘babas’ of India 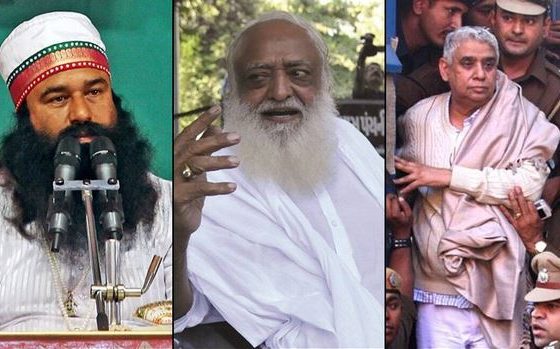 Prakash Jha’s rendition of a self-styled godman in India, played by Bobby Deol in the web series, ‘Aashram’, on Saturday came under attack by Bajrang Dal activists, who claimed that the show’s name was an “assault” on Hinduism. Echoing the thought, the Home Minister of Madhya Pradesh — where the shooting was taking place for the third season of the show — Narottam Mishra, too stated, “Why do you shoot scenes that hurt our sentiments? If you have the guts, why don’t you shoot scenes that are objectionable to [the followers of] other religions?”

Though the makers maintain that the work is purely fictional, Deol’s “Kashipur waale” Baba Nirala bears quite a resemblance to Gurmeet Ram Rahim Singh, the Dera Sacha Sauda chief, who was recently convicted of a second murder (of his employee Ranjit Singh and previously, of journalist Ram Chander Chhatrapati), and is currently serving jail sentence for raping two of his women disciples.

Though Mishra and Bhopal MP Sadhvi Pragya assert that portrayal of a saint in Aashram is an attack on Hindu religion, the reality is that many saints in the past have been have been convicted by the Indian courts for their notorious act. Here’s a look at some of those self styled godman:

Asaram was found guilty of raping a 16-year-old girl, who was studying at his ashram in Chhindwara in 2013. A Jodhpur court, on April 25, 2018, had sentenced Asaram to life in prison. After the girl made a complaint, a Surat woman and her elder sister, who were raped by Asaram and his son, Narayan Sai, respectively, also came forward. A Surat sessions court order in April 2019 had sentenced Sai to life imprisonment as well.

In August this year, seven persons were sentenced to one year of imprisonment after the a Gandhinagar magisterial court found them guilty for rioting and causing injury. In July 2008, followers of Asaram had attacked a group of journalists with sticks, who were outside his ashram in Motera, covering a bandh called in protest against the death of two minor boys who were students at the ashram’s gurukul.

Nithyananda has grabbed headlines over the years, some bizarre, and others over a series of charges levied against him by his followers. The godman escaped the country after being accused in a rape trial. In November 2019, an FIR had been lodged against Nithyananda and two of his followers at an Ahmedabad-based ashram for allegedly abducting, confining and torturing two minors and a 19-year-old woman.

However, this isn’t the only controversy surrounding the ‘swami.’ In 2010, a video of Nithyananda had surfaced on local news channels wherein he was purportedly shown engaging in sexual acts with a Tamil actress. He had defended himself at the time saying he was merely ‘practising the shavasana’ and that he was impotent.

A case was filed against him in Bangalore. He was finally arrested from Himachal Pradesh’s Solan district on April 21, 2010. Nithyananda was, however, let off on bail. Two years later, though, he landed again in soup when a US-based woman claimed that Nithyananda had abused her for five years.

Over a year after fleeing India in 2019 to escape arrest in a rape trial, Nithyananda unveiled a new central bank and freshly-minted currency of Kailasa — the ‘Hindu sovereign nation’ he claims to have founded.

A Haryana court in 2018 convicted self-styled godman Rampal and 27 of his followers in two murder cases. He was awarded life sentences in both the cases, which are now running concurrently.

The two murder cases pertain to death of five women and one child who died because of suffocation and illness during two-week long standoff and clashes between Rampal supporters and police in November 2014. That year, the Punjab and Haryana High Court had ordered the police to arrest Rampal after he failed to appear before the court in connection with a 2006 murder conspiracy case. However, when police went to arrest him, Rampal and his aides barricaded themselves and holed themselves up inside his Satlok Ashram.

Four devotees had accused Swami Sachidanand and three of his aides of gangrape in December 2017. While Basti police in August 2018 arrested two of the godman’s followers, including a woman, the Swami was said to absconding from the law.

The Petlad-based Swami was also facing charges in connection with the murder of one Babu Mohaniya at the former’s ashram near Petlad on July 17, 2006.

Sachidanand, also known as “Builder Baba” and “Disco Baba” was stripped off his title as “mahamandaleshwar” by the All India Akhara Parishad for being involved in “liquor business”. There are also reports of charges of land grab and illegal liquor trade against Dutta in Punjab and Haryana — but there are few details about the cases.

On February 25, 2010, he was held with two air hostesses on account of running prostitution ring for almost a decade in Delhi. On March 9 of the same year, MCOCA charges for flesh trade were slapped on him.

Shraddananda, who had buried his wife Shakereh alive in their Bangalore house to usurp her massive property, was awarded a life sentence by the Supreme Court in 2008.

According to reports, the godman, serving his sentence in the Sagar district of Madhya Pradesh, had sought to spend the rest of life outside of jail in August this year.

The self-styled godwoman Radhe Maa, whose real name is Sukhvinder Kaur, was accused in 2015, by one Niki Gupta, of inciting her parents-in-law to harass her for dowry. In 2017, the Borivali metropolitan magistrate rejected a discharge application filed by Radhe Maa and observed that she was “directly connected” with the incident of domestic violence.

In 2015, TV actress Dolly Bindra accused Radhe Maa of intimidation, sexual harassment and voyeurism and an FIR was filed. Bindra, who was a follower of the godwoman, said her prayer meetings were “obscene” and Radhe Maa would “force” her to “get close” to her male devotees.