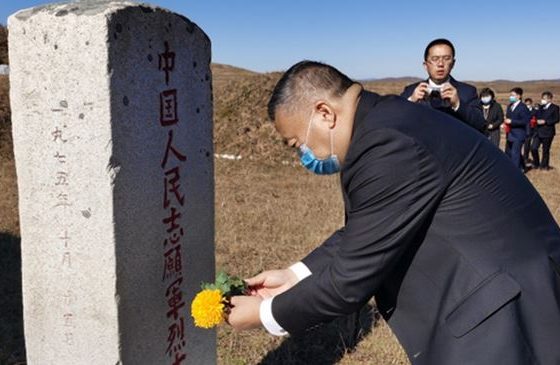 Ahead of the 71st anniversary of Chinese People’s Volunteers (CPV) firing the first shot in the War to Resist US Aggression and Aid Korea (1950-53), the Chinese Embassy in the Democratic People’s Republic of Korea held a memorial ceremony beside Lake Changjin (Chosin Reservoir) in North Korea to commemorate martyrs of the CPV who died in the Battle at Lake Changjin.

They sang the national anthem, laid flowers and paid a silent and highest tribute to those who sacrificed in safeguarding the Chinese nation and fighting against invasion and expansion of imperialism, in remembrance of the 71st anniversary when the CPV fought the first battle in North Korea on October 25, 1950 to resist US aggression.

Ambassador Li Jinjun straightened the red ribbons on the flower basket which reads Immortality to the martyrs of Chinese People’s Volunteer Army.

Representatives of young diplomats recited a poem to eulogize the braveness of the CPV and express the determination of young Chinese people to pass on their spirit and keep fighting for the rejuvenation of the Chinese nation.

Chinese last week commemorated the 71st anniversary of the CPV Army entering North Korea to help in the war to resist US aggression. Many netizens posted videos, pictures and heroic stories of Chinese soldiers fighting the war.

On October 19, 1950, as requested by North Korea, CPV forces crossed the Yalu River alongside the border line between China and North Korea to aid the latter’s fight against US aggression until the truce was signed in 1953.

Amid increasingly tense China-US ties, Chinese people’s sentiment toward the war was awakened by the recently released blockbuster The Battle at Lake Changjin, which features stories about brave Chinese soldiers fighting in the war. The movie’s box office has surpassed 5.2 billion yuan ($810 million), breaking many records.