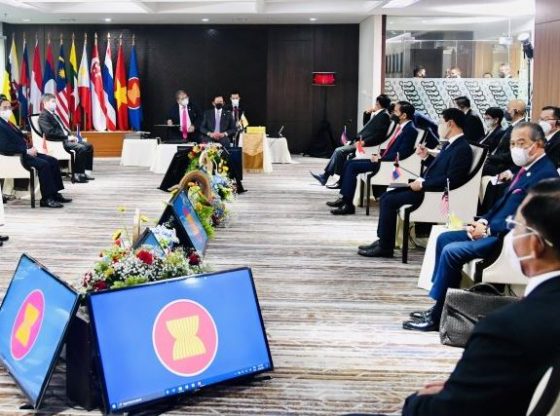 ASEAN let Myanmar contemplate after the members had decided not to invite its military junta to the summit held on October 26-28, 2021, according to the international relations expert at Padjadjaran University Teuku Rezasyah.

“ASEAN needs to ensure the international community that Myanmar has to be let alone first at this moment. This is a contemplating momentum for the country, but the decision is not aimed to expelled it from the association,” Rezasyah told Antara here on Sunday.

The association’s decision was based on some considerations, he said adding that one of them is Myanmar was not committed to make peace in the country.

In addition, ASEAN did not receive good responses from Myanmar pertaining to the Five-Point Consensus.

It will lead to confusion among the member countries as well as international community if Myanmar attended the summit, he noted.

“If Myanmar came, the global community will keep questioning and it will create an awkward moment among ASEAN members,” he pointed out.

The ASEAN decision is right, according to the expert, adding that the association should do some measures to maintain the peaceful coexistence in the region.

Myanmar should be ensured that its absence in the summit will not lead to resolution or statement against the country, he said.

Myanmar, that did not follow the ASEAN’s legal product and broke its own promise to hold general election, had surprised and disappointed the country members, he highlighted.

One of the factors driving Myanmar to do such things is its internal trade with ASEAN countries, including Indonesia being not so strong, thereby weakening the ASEAN’s bargaining power compared to China.

“The internal trade between Indonesia and Myanmar is not recorded high, instead Myanmar focuses on China. Indonesia, Malaysia, and Brunei Darussalam do not have much guts to give more pressure to Myanmar since we do not have something to offer. Concession can be made if there are any takes and gives,” he expounded.

Geographically, he added, Indonesia and Myanmar are not closed compared to China which is able to directly give more influence to Myanmar.

“The current condition in the region become the global spotlight. Myanmar should stay in ASEAN, but at this moment it needs a break and let other members discuss about the issues openly. The association can make decision without each member being present, but Myanmar should be affirmed to still get the information,” he remarked.