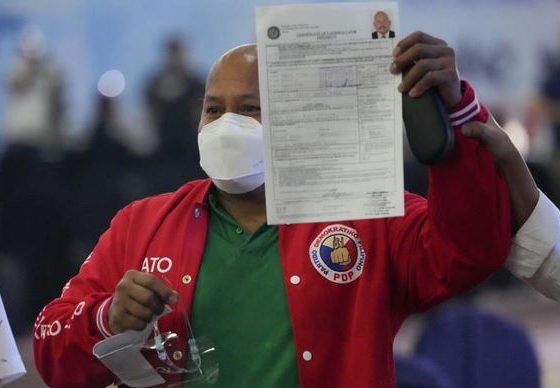 If he wins the presidency, Senator Ronald “Bato” dela Rosa will not allow the International Criminal Court (ICC) to conduct its probe over alleged human rights violations committed during President Duterte’s bloody war on drugs.

The presidential aspirant said that this stance was to protect himself as much as Duterte, who are co-accused for crimes against humanity mounted by rights victims and kin of alleged state-sponsored extra-judicial killings before the ICC.

“I will not only protect President Duterte but also myself because we are both co-accused in the case there,” he said in an interview over ABS CBN News Channel when asked whether he will allow the ICC to conduct a thorough investigation or will protect Duterte.

Dela Rosa was the chief of the Philippine National Police which carried out Duterte’s order.

The senator likewise belied any crimes against humanity had been perpetrated by the administration, and blatantly denied the Amnesty International’s (AI) report on the country’s drug war killings.

“I ask you, are there crimes against humanity being done here in the country? Let’s not cite the Amnesty report because we know that they are biased because they are fed with lies,” a visibly irate Dela Rosa said when the rights group report was mentioned.

In a 2019 report, AI slammed the Duterte administration’s lack of “meaningful accountability” on the brutal war on drugs which claimed the lives of thousands of drug suspects since it was enforced in 2016.

The London-based human rights group stressed that this prosecution is “in no way commensurate with the vast number of extrajudicial executions and other human rights violations.”

In its report titled “They just kill: Ongoing extrajudicial executions and other violations in the Philippines’ ‘war on drugs”, the group noted that Bulacan is now the country’s “bloodiest killing field” due to the transfer of police officers who previously supervised “abusive operations” in Metro Manila.

It also condemned the “buy-bust” narrative being used as a template of police reports in the province of Bulacan.

Dela Rosa, however, admitted that there were police officers who abused their authority during the drug war and said they are being prosecuted.

In September this year, the Pre-Trial Chamber I of the ICC approved the start of the probe into the crimes against humanity cases filed against President Duterte in connection with the drug war killings.

India to move some migrant workers in Kashmir to army camps after killings
Philippines DOH says that Covid-19 cases in the country are on downward trend as 6,943 new cases reported on Monday (Oct 18)