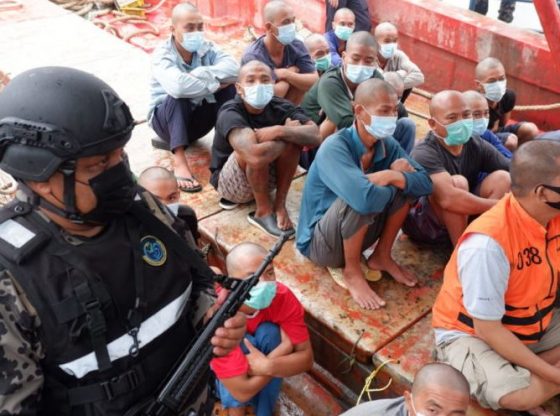 Reports of labor right violations against Indonesian mariners have been globally reported. Upon recruitment, they’re poorly trained, forced to sign exploitative contracts, and often given onerous payment schemes, experts say. When they’re on board the vessels, these crews face potentially deadly working conditions, including overwork, physical and mental abuse, and being given substandard food.

Many of the vessels that employ Indonesian deckhands also engage in illegal, unregulated and unreported (IUU) fishing. Those that work on boats from neighboring countries are often caught operating illegally inside Indonesian waters. In other cases, they work on foreign distant-water fishing vessels that deliberately catch protected endangered species.

Maritime observers are calling on the Indonesian government to strengthen the regulations for recruitment, placement, repatriation and legal reparation for crews aboard foreign and domestic vessels. Mohammad Abdi Suhufan, national coordinator for the NGO Destructive Fishing Watch (DFW) Indonesia, said the deckhand recruitment process lacks full transparency and justice. Meanwhile, the lax inspections at sea and ports by authorities have failed to tackle the issue, he added.

The Indonesian labor and transportation ministries have historically presided over parallel licensing regimes for migrant fisher recruitment, even as some local governments also issue permits. The lack of clarity over which agency is responsible has allowed fly-by-night recruiters to flourish, endangering migrant workers, Abdi said.

He said a key step in tackling labor right violations among the would-be deckhands is to establish a program and action plan for human resource development for the mariners, particularly pertaining to their qualifications and competencies. He added that having a hotline to report a violation was also important.

“Another way is to have a formal agreement between Indonesia and the country of destination acknowledging our seafarer certifications,” Abdi said. This agreement, he added, should cover recruitments by foreign vessel owners and crew agencies.

The Indonesian fisheries ministry recently issued a decree that focuses largely on improving domestic fishing operations. But Abdi said the ministerial regulation was a lost opportunity to beef up protections for deckhands working on Indonesian vessels. He said the decree could have included having joint inspection on the vessels.

“Not much is changed by the new regulation as it only slightly improves the labor protection aspect in fishing operations,” Abdi said.

Experts say improving labor protection policies for domestic fishing operations could discourage Indonesians from seeking to work on foreign vessels. Indonesia is widely believed to be the industry’s biggest supplier of such labor. Abdul Halim, executive director of the NGO Center of Maritime Research for Humanity, said poor socioeconomic conditions among Indonesian fishers compel them to find employment on foreign vessels despite the lack of guarantee for their human rights and safety aboard these boats.

“The government must resolve the problems faced by our fishers so that they won’t be interested anymore to work on foreign vessels,” Abdul said.

The Indonesian government has been working on regulations that experts say will provide better protection for deckhands working on domestic and international vessels. For instance, a draft regulation that incorporates the U.N.’s 2007 Work in Fishing Convention is awaiting signatures from multiple ministries before it can be sent to the president. However, the regulation has been stuck in that process for more than a year, experts note.

The Indonesian Coordinating Ministry for Maritime Affairs and Investment is reportedly drafting a national action plan for the protection of seafarers and deckhands working at home and abroad.

NHS trust apologises to families of patients who died after catching Covid at hospital
The Big Story: Slow start as Bali reopens to foreign tourists amid Covid-19