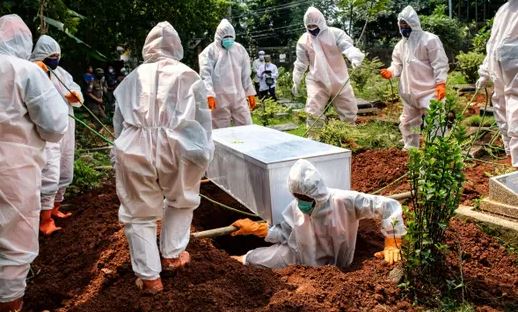 Australia will send 2.5m AstraZeneca vaccine doses to Indonesia and will fund 1,000 ventilators as the country battles record-high Covid cases that are pushing the health system to breaking point.

The aid package, announced on Wednesday night, is in response to growing calls for Australia to help its most populous neighbour.

Indonesia reported on Tuesday a record daily high of more than 31,189 new coronavirus cases and 728 deaths, but it is feared the true numbers may be higher because of low testing rates.

The Australian foreign minister, Marise Payne, said she had spoken with her Indonesian counterpart, Retno Marsudi, on Wednesday to confirm “immediate health support”.

“Australia stands with our close partner and neighbour Indonesia as it responds to a significant surge in Covid-19 cases,” Payne said in a statement.

More than 60 people were reported to have died in a hospital where the supply of oxygen nearly ran out last weekend, while the citizen data project LaporCovid-19 has reported being unable to source beds for ill patients.

The Australian government also plans to provide Indonesia with more than 40,000 rapid-antigen test kits, along with 2.5m AstraZeneca vaccine doses in 2021.

She said the package built on “Australia’s strong support for Indonesia’s Covid-19 response to date”, including the previously announced provision of a $1.5bn loan and 100 non-invasive ventilators and other medical and laboratory equipment.

Payne said Australia was already providing $102m in support of Indonesia’s national vaccine rollout, including $77m for vaccine procurement through Unicef. The minister also pointed to Australia’s $130m contribution to the Covax initiative.

The aid group Save the Children had warned earlier that unless the international community provided further urgent help, “the Covid crisis in Indonesia will quickly spiral out of control” and “many more children and adults will die”.

Labor’s foreign affairs spokesperson, Penny Wong, said on Tuesday the situation was “deeply concerning” and Australia “must act now with a comprehensive response to Indonesia’s needs, including the emergency provision of oxygen”.

The Greens’ foreign affairs spokesperson, Janet Rice, had also called on Australia to join with the international community to address “a rapidly escalating crisis happening right on our doorstep”.