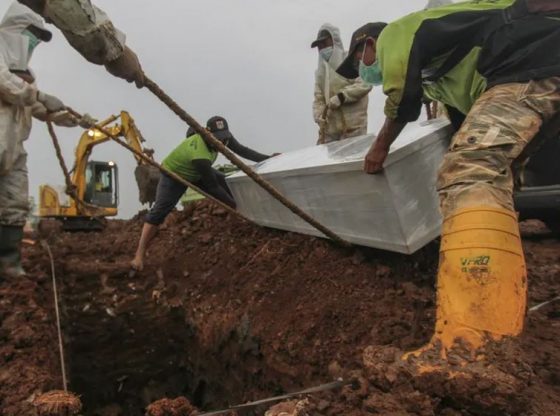 It is only noon and the grave diggers at Rorotan cemetery have buried 23 bodies of Covid-19 patients since they started work at 7am.

At least two excavators are on standby because the hard soil in the area makes it difficult to dig with just shovels.

Six grave diggers in white gowns carry coffins from ambulances that are lined up near the graveyard. On a very busy day, there could be 10 ambulances queuing. All the gravediggers look exhausted, feet covered with mud. There are at least 30 gravediggers at the cemetery every day.

Next to them, family members cry in silence, chanting prayers for their loved ones, often interrupted by cemetery staff spraying disinfectant on them, while the excavators dig new grave holes around them.

But there is a brief silence when a tiny white coffin wrapped in plastic appears from behind an ambulance.

“It’s a child. It’s a child! Make a new hole!” several grave diggers shouted. An excavator swiftly approaches, digging the muddy ground at the end of the newly made row. The size of this new hole was less than half that of the other graves around it.

This is the first child of the day to be buried.

“It always feels sadder when we bury a child. They are too young to die,” Darsiman, 48, says, adding that most of those buried at the cemetery in North Jakarta, Indonesia, are over 30.

Since the Rorotan cemetery opened two months ago, Darsiman says they have buried 900 bodies. In the past two weeks he has seen a significant increase of bodies sent to the cemetery as the capital, and Indonesia, battles a pandemic that has killed more than 56,000 people in the country. Indonesia surpassed 2m cases in the past week, and on Thursday, authorities reported 20,574 new cases, another record since the pandemic hit the country last year.

“I think by the end of today there will be more than 1,000 bodies buried here,” Darsiman says.

More than 100 burials a day

Darsiman, a gravedigger with more than 20 years’s experience takes a quick break, sitting between graves as he observes his team and the other diggers prepare the burial. His white protection gown and mask are smeared with mud.

“It’s too exhausting. Every day we started at seven in the morning and finished at 10 or 11 at night,” Darsiman says. “Yesterday was more crowded. Around this time, we had buried more than 40 people. When we finished last night there were 78 people buried here.

Darsiman worked at another cemetery – Budi Dharma cemetery – in the capital before being assigned to Rorotan when it opened. The Jakarta administration opened the three-hectare plot of land only for Covid-19 graves, as the number of coronavirus cases in the capital has continued to climb and burial space for coronavirus victims in the capital city was running out. It is now the main Covid burial site in Jakarta.

Ivan Murcahyo, the head of the Jakarta City Parks and Forestry Office, says there is space to bury around 6,000 bodies.

Ivan says they had prepared for a possible burial surge because from their experience there is usually one a month after a holiday ends.

It’s tiring but we have to stay healthy, because if we’re sick, who will bury them

Darsiman says he has never become used to facing so many deaths every day.

“I’ve seen too many bodies sent and buried to this cemetery. I often wonder what if I was one of them. There are too many things that I feel inside. But I’d rather hold it in because it’s very overwhelming,” he says.

“It’s not the dead that I’m afraid of because they were sealed with Covid-19 protocol from hospitals. It’s the living, their families that came to the cemetery to send them. They made me afraid, because I don’t know whether they [had the virus or not].”

Until now Darsiman always kept his distance from his wife and two children. He’s afraid he might bring the virus home.

Other public cemeteries, such as Bambu Apus in East Jakarta, still provide some space for Covid-19 burials. Bambu Apus contains 1,257 virus victims since it opened a special Covid-19 area in January. Endang Leo, a gravedigger there, says they have been burying about 10 Covid victims a day for the past few weeks.

“It’s tiring but we have to stay healthy, because if we’re sick, who will bury them,” he says.

Endang just hopes they can get more protection since they are not given masks, protective gowns or gloves for the burials.

Jakarta is the province with the highest number of Covid-19 deaths, followed by Central Java, East Java, West Java and Lampung.

More and more people from these provinces are crying for help on social media and chat groups, asking for any information to find oxygen, blood and intensive care rooms for family or friends with the virus.