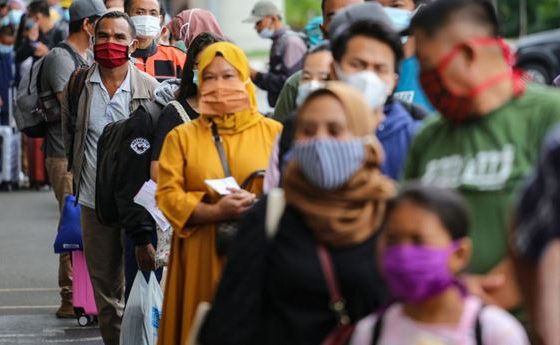 JAKARTA : While Indonesia plans to reopen to international tourists in the near future, medical policy failures, including the reuse of Covid-19 test kits and breaches of mandatory quarantine, have called the country’s preparation into question.

The government has established several travel rules in an effort to reduce CovidD-19 transmission risk.

Travellers must present negative results from either PCR or antigen tests, and people arriving from outside the country are required to quarantine at designated facilities for five days.

But with weak policy oversight, some have treated the rules as an opportunity for illicit profit and others have found ways around the regulations entirely.

The employees have been accused of cleaning the used swabs at a lab in Medan.

One of the suspects, the firm’s then-business manager, acknowledged to the media that he was aware of the practice and added that they had recycled only the swabs of those who had tested negative.

“This is not in line with the health standards, ” North Sumatra Police chief Insp Gen Panca Putra Simanjuntak said during a press briefing last week.

The suspects allegedly made Rp1.8 billion (US$124,630) through the scheme, some Rp149 million of which has been confiscated by the police. An antigen test can cost up to Rp250,000.

The suspects have been charged with violating an article in the 2009 Health Law that carries a maximum sentence of 10 years in jail and a Rp10 billion fine.

They have also been charged under the 1999 Consumer Protection Law and, if found guilty, may face an additional sentence of up to five years in prison and a Rp2 billion fine.

“It is very dangerous, both for people and trust in laboratories,” said Association of Indonesian Clinical Pathology and Laboratory Medicine Specialists (PDS PatKLIn) chair Aryati.

State-Owned Enterprise Minister Erick Thohir pledged on Friday (April 30) to conduct a “thorough procedural and organizational investigation” into the case.

A Kimia Farma general shareholders meeting two days prior resulted in the removal of five members of the board of directors, including the company’s president director.

But while the case has sent shock waves throughout the country, where some remain skeptical of Covid-19 test results from health facilities, efforts to get around Covid-19 regulations, whether on the business or consumer side, are not new.

In January, the Jakarta Police arrested three university students offering forged PCR test results after one managed to use his fake results to travel to Bali from Jakarta. They were offering the documents for Rp650,000 per test result, less than the PCR price ceiling of Rp900,000, kompas.com reported.

The Jakarta Police have also named seven Indian nationals and four Indonesians suspects for allegedly breaching quarantine rules and are searching for two more, as well as several alleged middlemen.

They arrived at Soekarno-Hatta International Airport on April 21 from India and allegedly paid between Rp 6 million and Rp 7.5 million to Indonesian middlemen to be allowed to proceed directly to their residences.

People arriving directly from India or who have been in the virus-stricken country within two weeks of their arrival to Indonesia are subject to an extended quarantine of 14 days at designated facilities.

The government covers the cost of quarantine for Indonesian migrant workers, students and government workers, but other Indonesians and foreign nationals must pay out of pocket to stay at hotels listed by the Indonesian Hotel and Restaurant Association (PHRI).

The policy has been criticized by experts as too lax, especially amid growing concerns of new variants and a global case resurgence.

The LaporCovid-19 (Covid-19 Report) community has compiled social media posts of foreigners under quarantine in the Oakwood apartments in North Jakarta who have allegedly managed to carry out activities outside their rooms.

The Jakarta Tourism and Creative Economy Agency has issued a written warning to the apartment building’s management for allegedly breaching health protocols.

“If it’s repeated, the facility must be closed for three working days,” the agency’s acting head, Gumilar Ekalaya, told The Jakarta Post.

The Health Ministry’s health quarantine subdirectorate head, Benget Saragih, said the ministry had asked the PHRI to remove Oakwood from the list of locations available for the mandatory quarantine.

This was a serious issue, she said, because Covid-19 cases should be contained as early as possible to prevent further transmission.

“With monitoring from the government truly lacking, if the country [opens for tourism], it will only make things more difficult,” she said.