Covid patients turned away as hospitals in Indonesia face collapse 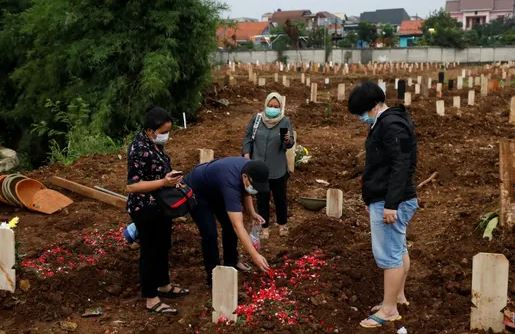 Health experts in Indonesia have warned that hospitals in some areas are on the brink of collapse as the nation passed one million confirmed cases of coronavirus.

In one case, a man died after he was turned away from 10 hospitals, including three in Jakarta, with doctors under greater strain that an any time in the pandemic.

Irma Hidayana, a public health expert and co-founder of Lapor Covid-19, a volunteer group that aims to improve data collection during the pandemic, said that over recent weeks her team had been in touch with dozens of patients unable to find a hospital bed.

Halik Malik, a spokesman for the Indonesian Doctors Association, said that in several regions patients had faced difficulties accessing Covid-19 intensive care units and isolation rooms, due to a rise in demand. “It seems that the current overload or overcapacity situation is the worst during the Covid-19 pandemic in Indonesia,” he added.

The health ministry announced that new daily infections rose by 13,094 on Tuesday to bring the country’s total to 1,012,350, the most in south-east Asia. The total number of deaths reached 28,468.

There is concern that recent regional elections, as well as the holiday period, have contributed to a rise in transmission.

If the number of cases does not begin to fall over the next week, hospitals in Java and Bali would collapse under the pressure, said Lia Gardenia Partakusuma, secretary general of the Indonesian Hospital Association (PERSI).

“Collapse means we will be in a condition where we can only treat the patients that are already in the hospital,” she said, adding that currently hospitals have little choice but to ask patients to queue for hours in emergency rooms.

“Even my very close relative has just died in the emergency room from Covid because there was no room available. So, this is real. This is not a fiction. Not a rumour. This has been happening in several hospitals.

“We don’t want it to be like this. We are obligated to help, we want to help, we don’t know where else we can put the patients,” Lia added.

Surgeries for non-Covid patients, including heart surgeries, have been delayed because there is not enough space in intensive care units, she said.

The government is attempting to boost treatment capacity, but Irma said tighter social distancing rules were needed to slow the rate of infections. “You need to take emergency steps, and an epidemiological approach – testing, and restricting people from moving from one to another area. But we have seen nothing. As a result hospitals are now collapsing,” she said.

Some restrictions are in place to reduce physical contact, for example, limits on the proportion of employees allowed to work from their company office. Malls and restaurants, however, remain open.

Limited testing and delays in obtaining results have hampered efforts to carry out contact tracing. According to Our World in Data, an Oxford University initiative that tracks data relating to the pandemic, the positive rate for tests was 27.70% over the past seven days. The World Health Organization (WHO) said in May that a positive rate of less than 5% was one indicator that the epidemic was under control.

Halik said there had been a spike in Covid-19 infections, especially severe cases, while hospitals were also struggling to care for non-Covid patients.

The increase in demand has placed huge pressure on medical staff, who, according to Lapor Covid-19, continue to report shortages of protective equipment. Since the start of the pandemic, at least 647 medical workers have died, according to the group.

“We still hear complaints from health workers saying – we have to purchase our own PPE ourselves, we have to wash our n95 masks 10 times and then iron [equipment] and make sure it’s really sterilised, and put it on again and again,” said Irma.

This month, Indonesia began its vaccination campaign, one of the biggest in the world, with priority given to health workers. As of Friday, 132,004 medical staff had received their first of two jabs of CoronaVac, a vaccine made by Chinese company Sinovac, which was approved for emergency use in Indonesia.

Indonesian trials of the Sinovac vaccine found it to have about 65% efficacy, though trials from Brazil found a much lower efficacy rate of 50.4% – only just above the requirement set by the WHO.

Only people aged 18-59 qualify for CoronaVac in Indonesia because the country’s regulator says it does not have enough data on the vaccine’s impact on older people. “The first priority is the front liners, which means health workers and the public service, and we [will] include the elderly in the next phase,” said Siti Nadia Tarmizi, the health ministry’s vaccine spokeswoman. Older people will be vaccinated either when more data on CoronaVac becomes available, or when other vaccines arrive in the country, she said.

There are concerns over suggestions that the government may allow companies to procure their own vaccines. “The stock in the world is very limited,” said Pandu Riono, an epidemiologist at the University of Indonesia, who added that he feared this would create an unequal system where wealthy people could jump the queue.

The government aims to eventually vaccinate 181.5 million people, about 67%, of its population, a mammoth and complex task for health teams working across the sprawling archipelago.