Philippines and Indonesia back Chinese Covid jab despite efficacy doubts 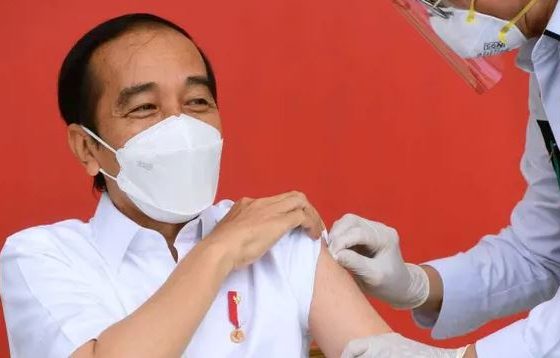 Several countries in south-east Asia are expected to deploy the Chinese Sinovac vaccine despite concerns over its efficacy.

Data released from a trial of the Sinovac jab in Brazil this week suggested its efficacy was 50.4% – lower than previously thought and only just above the requirement set by the World Health Organization.

Indonesia has ordered 125m doses from Sinovac and began its vaccination campaign with the president, Joko Widodo, receiving a jab live on television.

The Philippines has signed a deal for 25m doses, while Myanmar has been promised a donation of vaccines by China. Thailand, whose biggest supplier is AstraZeneca, has ordered 2m Sinovac doses and hopes to start administering the first batch next month.

Elsewhere, Turkey began administering the Sinovac vaccine to healthcare workers on Thursday after approving it for emergency use.

Health experts fear public trust has been undermined by a series of conflicting efficacy findings, and say a lack of data is hampering their understanding of how the vaccine works.

Turkish researchers reported it had 91.25% efficacy, an Indonesian trial reported 65.3%, while Brazilian research teams said last week that it was 78% effective in preventing mild to severe cases of Covid, only to later clarify that this was just a partial picture. On Tuesday it was announced that the efficacy was 50.4% for all symptomatic infections, including very mild infections where people did not require clinical assistance.

The Philippine president, Rodrigo Duterte, has since defended the Sinovac jab, claiming it is “as good as any other vaccines invented by the Americans or the Europeans”. He said on Thursday there had been a scramble for vaccines and “rich countries bought all the supplies”.

There are various possible reasons why the findings vary so widely, including the size of the trials, the makeup of the participants and the duration of post-vaccination observation. The Brazil trial was by far the biggest, with 13,000 participants. However, it recruited only health workers, who may be more alert to any symptoms and more exposed to the virus than others.

Lorenz von Seidlein, an associate professor in the tropical medicine research unit at Mahidol University in Thailand, said the decision to release findings for certain subgroups had also skewed findings.“The more you cut [findings] down into smaller groups, the power of the study is reduced and so the chance that it is a spurious finding increases,” he said.

The finding of 100% protection against severe disease in the Brazil study was not statistically significant, he added – a point that would be picked up if the interim results were submitted for peer review.

The Brazil Sinovac trial is not the only case where subgroup analysis has been offered. The vaccine developed by Oxford University and AstraZeneca also reported two different success rates. It showed 62% efficacy when two full doses were administered to adults of all ages, and 90% in a sub-group of participants not older than 55 who were given half a dose followed by a booster.

Sinovac has been criticised for providing less data than western vaccine makers. The company said not all trials were designed in the same way, but it had illustrated that the vaccine was safe and effective.

Dr Thiravat Hemachudha, the head of the Thai Red Cross’s Emerging Infectious Disease Health Science Centre, said it was possible that variants of the virus could also affect results. “We cannot look at the data and see only the numbers,” he said. “In Brazil the variant might differ from the variant in the US or England.”

The Thai government, which has reintroduced restrictions after a new wave of cases emerged last month, said it was requesting more information from Sinovac following the Brazil report but it had not changed its plans.

Malaysia, where many areas are again under lockdown owing to a rise in cases, has also looked at the Sinovac vaccine but said it would review the company’s clinical data before going ahead.

Indonesia, which has recorded almost 25,000 deaths, began vaccinating health workers this week. “We are not waiting for a better vaccine because we do not know when it will arrive in Indonesia,” said the health ministry’s Covid vaccination spokesperson, Dr Siti Nadia Tarmizi. She said delaying any further would risk increasing the number of fatalities.