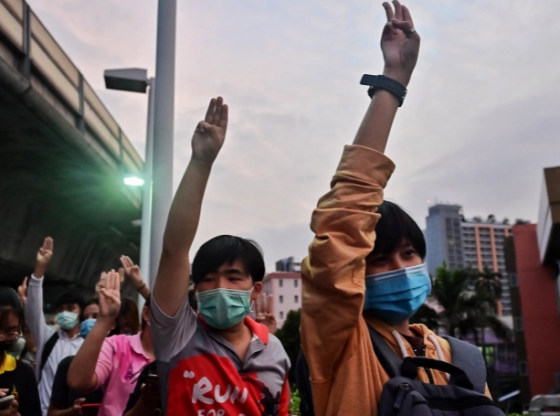 Voice TV has broadcast anti-government protests live on social media and was one of four outlets under investigation.

Thai protesters raised three-finger salutes to the national anthem at public places across Bangkok on Tuesday as anti-government rallies continued and the government ordered an online TV channel to close over its coverage of the demonstrations.

The authorities imposed emergency measures banning gatherings of more than four people last Thursday amid growing protests against the government and monarchy.

But protests have only grown despite a crackdown in which dozens have been detained.

Two protest leaders – Parit “Penguin” Chiwarak and Panusaya “Rung” Sithijirawattanakul – were arrested on Tuesday on new charges as soon as a court freed them bail in relation to a previous set of charges.

“This is not a leaderless protest, but everybody is a leader,” Tattep “Ford” Ruangprapaikitseree told reporters at the Siam Paragon mall, where dozens of people gave the salute borrowed from The Hunger Games.

“It’s not anarchy. Everybody has judgement and will do what is reasonable,” said Ford, who has already been arrested twice since the protests began.

Prime Minister Prayuth Chan-ocha’s cabinet agreed to an emergency session of parliament next week because of the crisis, but he has said he will not quit – as the protesters have demanded. Prayuth’s supporters have a majority in parliament.

Protesters also want changes to the constitution and a reduction in the powers of the monarchy under King Maha Vajiralongkorn.

The emergency measures only appear to have stoked public anger, but Tuesday turned out to be the quietest day on the streets since the decree was imposed with only a few hundred gathering.

Thai Lawyers for Human Rights said they would be filing a suit with six students and other human rights groups on Wednesday to revoke the declaration and seek an injunction to prevent government crackdowns.

Earlier, a court ordered the suspension of Voice TV, an online broadcaster critical of the government.

Editor-in-Chief of Voice TV Rittikorn Mahakhachabhorn said it would continue broadcasting until the court order arrived.

“We insist that we have been operating based on journalistic principles and we will continue our work presently,” he said.

Voice TV was one of four media organisations under investigation for their coverage of the continuing protest movement. Many have been reporting the protests live on Facebook and other social media platforms.

The channel is part-owned by the Shinawatra family of former Prime Minister Thaksin Shinawatra and his sister Yingluck, who was overthrown by Prayuth in a 2014 coup. Both fled Thailand to escape corruption cases they branded political.

The demonstrations have been largely led by students and young people in contrast with 10 years of street violence between supporters of Thaksin and conservative royalists before Prayuth seized power.

“Media freedom is important but in some cases there are some media outlets disseminating distorted information that is inciting unrest,” he said after a court order following a complaint from the Ministry of Digital Economy and Society.

The court ruling comes a day after the same ministry said it had flagged more than 325,000 messages on social media platforms that violated the Computer Crimes Act, which critics say is used to muzzle dissent.

“The harassment of media outlets is just one facet of the Thai authorities current assault on communications channels, alongside threats to block the messaging platform Telegram and use of the Computer Crimes Act, among other laws, against people for what they post and share online,” Amnesty’s Deputy Regional Director for Campaigns Ming Yu Hah said in a statement.

Human Rights Watch said the closure of Voice TV was a misuse of the emergency decree and noted that the channel had been a target of censorship more than any other TV station in the country.

“The crackdown is part of a bigger effort to bully and control the media into becoming a government mouthpiece,” the group’s Asia Director, Brad Adams, said in a statement.

The Foreign Correspondents Club of Thailand expressed deep concern that the Royal Thai Police was investigating Voice TV, along with online media outlets Prachatai, The Reporters and The Standard.

“A free media is an essential element in any democratic society and bona fide journalists should be allowed to report important developments without the threats of bans, suspensions, censorships or prosecution hanging over them,” the club said.

The court has yet to announce its decision on the other three media organisations.