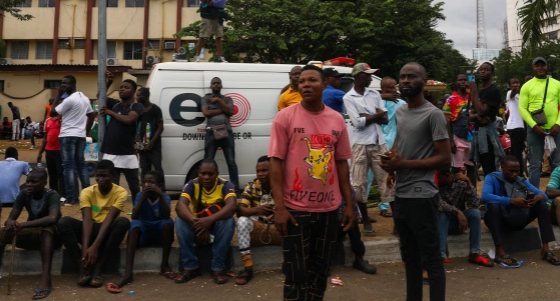 Nigeria’s security forces have reportedly shot dead demonstrators protesting against police brutality in Lagos, according to several witnesses, as authorities imposed a curfew and promised an investigation.

Four witnesses told Reuters news agency that soldiers fired at the protesters who had gathered in the Lekki district of Nigeria’s largest city in defiance of an indefinite curfew imposed hours earlier by the authorities.

Hundreds of people were at the site at the time of the shooting, which witnesses said took place around 7pm local time (18:00 GMT).

“They started firing ammunition toward the crowd. They were firing into the crowd,” said Alfred Ononugbo, 55, a security officer. “I saw the bullet hit one or two persons,” he said.

Scenes of protesters removing a bullet from someone’s wound and pleading for help were broadcast in a live video on Instagram by DJ Switch, a popular disc jockey.

Amnesty International said it had received “credible but disturbing evidence of excessive use of force occasioning deaths of protesters at Lekki toll gate in Lagos”, adding that it was investigating “the killings”.

Another witness, Chika Dibia, said soldiers hemmed in people as they shot at them.

Video verified by Reuters showed men walking slowly in formation toward demonstrators, followed by trucks with flashing lights, and the sound of gunfire popping. Another video showed the toll gate itself, with a protester waving a Nigerian flag, as people ran amid the sound of gunfire.

In a Twitter post, the Nigerian Army said no soldiers were at the scene of the shooting on Tuesday night.

Lagos State Governor Babajide Sanwo-Olu tweeted pictures of him visiting people in hospital who were victims of what he referred to as the “unfortunate shooting incident at Lekki”.

He said 25 people were being treated for mild to moderate injuries, two were receiving intensive care and three had been discharged.

“As the Governor of our state, I recognise the buck stops at my table and I will work with the FG (federal government) to get to the root of this unfortunate incident and stabilise all security operations to protect the lives of our residents,” Sanwo-Olu said, adding that he would give a state broadcast on Wednesday morning.

Earlier, Sanwo-Olu alleged that criminals had hijacked the protest movement “to unleash mayhem” and announced a curfew in the city.

The state government earlier said it would open an investigation into the shooting. A Nigerian army spokesman did not immediately respond to requests for comment.

Lagos is one of five of Nigeria’s 36 states to have announced movement restrictions in the last two days. Protesters pledged to remain on Lagos’s streets regardless.

“Are you afraid?” a man shouted to the flag-waving crowd from a stage. “We will stay here peacefully,” 32-year-old demonstrator Akin told AFP. “This is our new home.”

Separately on Tuesday, the national police chief ordered the immediate deployment of anti-riot forces nationwide following increased attacks on police facilities, according to a police spokesman.

Tens of thousands of people have been taking to the streets every day for nearly two weeks across Nigeria to demand an end to police violence.

The protests, organised under the #EndSARS hashtag, began with calls to scrap a notorious police unit, the Special Anti-Robbery Squad (SARS), which has long been accused of extortion, torture and extrajudicial killings.

After days of widespread demonstrations, the authorities announced SARS would be disbanded, ordering all personnel to report to the police headquarters in Abuja for debriefing and psychological and medical examinations.

Officials said SARS would be replaced by a Special Weapons and Tactics (SWAT) team.

The announcements have not satisfied the protesters, who see the changes as nothing but a renaming exercise. On Monday, Amnesty said at least 15 people have been killed since the demonstrations began.