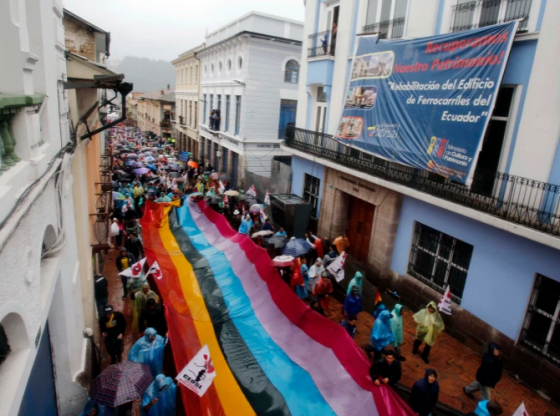 Ecuador’s largest Indigenous organisation has filed a lawsuit against President Lenin Moreno and other officials for alleged crimes against humanity committed during protests last October that left 10 people dead.

The Confederation of Indigenous Nationalities of Ecuador (CONAIE) asked the prosecutor’s office on Monday to investigate “crimes against humanity” because they believe the crackdown was “a systematic and widespread attack on the civilian population,” the group’s lawyer, Carlos Poveda, told AFP news agency.

The government has yet to comment on the lawsuit.

Protests began in early October when Moreno cut petrol subsidies that had been in place in the country for 40 years. The cuts saw the price of diesel more than double and petrol increase by 30 percent, overnight.

Moreno called a national state of emergency, which put more riot police and army officials on the streets across the country.

At one point, the president moved his government from the capital Quito to the port city of Guayaquil. He eventually backed down and reestablished the fuel subsidies.

Poveda said the lawsuit was against Moreno, the minister of interior, the defence minister, the police chief and the comptroller.

“We had filed complaints, we had told the State that they should investigate the events of October 2019, but this irresponsible government and the Ecuadorian justice system have not been able to respond and give an explanation to the Ecuadorian people,” CONAIE president Jaime Vargas told reporters.

According to data provided by the ombudsman’s office, the protests left 10 people dead, 1,340 injured and 1,192 arrested. The demonstrations also caused an estimated $821m in damage.