‘War will benefit no one’: Global concern over US-China tensions 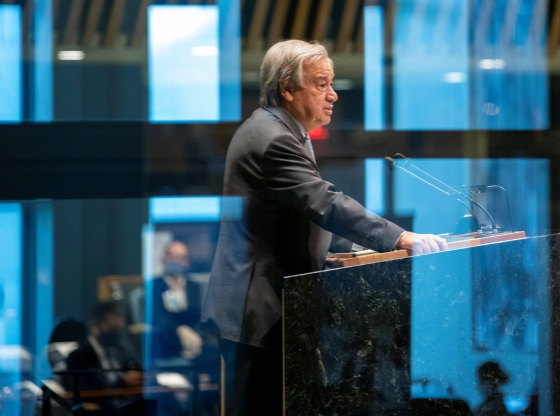 Concern over escalating tensions between the United States and China has taken centre stage at the United Nations General Assembly (UNGA), with Secretary-General Antonio Guterres warning against a “new Cold War” and the presidents of Indonesia, the Philippines and France expressing worry over the threats posed to world peace and stability by the superpower rivalry.

Opening a virtual “general debate” of world leaders – a first in the UN’s 75-year history – Guterres said on Tuesday that the world was “moving in a very dangerous direction”.

“We must do everything to avoid a new Cold War,” he said. “Our world cannot afford a future where the two largest economies split the globe in a Great Fracture – each with its own trade and financial rules and Internet and artificial intelligence capacities.

“A technological and economic divide risks inevitably turning into a geo-strategic and military divide. We must avoid this at all costs.”

The stark warning came as Washington and Beijing clash on several issues, ranging from trade, technology and the coronavirus pandemic to US support for Taiwan as well as China’s claims in the South China Sea and its crackdown in Hong Kong and Xinjiang.

The rivalry between the two powers was in full display at the UNGA as US President Donald Trump, in a very short virtual speech, urged the world body to hold Beijing “accountable” for failing to contain the virus that was first recorded in the Chinese city of Wuhan and has killed more than 200,000 Americans and nearly 1 million people worldwide.

China’s ambassador rejected all accusations against Beijing as “totally baseless”.

“At this moment, the world needs more solidarity and cooperation, and not a confrontation,” UN Ambassador Zhang Jun said before introducing President Xi Jinping’s prerecorded speech.

“We need to increase mutual confidence and trust, and not the spreading of political virus.”

‘War will benefit no one’

Xi’s address contained what appeared to be an implicit rebuke to Trump, calling for a global response to the coronavirus and a leading role for the World Health Organization (WHO), which the US president has announced plans to leave.

“We should enhance solidarity and get through this together,” Xi said.

“We should follow the guidance of science, give full play to the leading role of the World Health Organization and launch a joint international response … Any attempt of politicising the issue, or stigmatisation, must be rejected.”

China has portrayed itself as the chief cheerleader for multilateralism at a time when Trump’s disregard for international cooperation has led him to quit global deals on climate and Iran’s nuclear programme, as well as the UN Human Rights Council and the WHO.

Amid the tensions, French President Emmanuel Macron said on Tuesday the coronavirus pandemic should shock nations into working together – and resisting a world order dominated by China and the US.

“The only solution can come from our cooperation,” he said. “Today’s world cannot be left to the rivalry between China and the United States, regardless of the weight in the world that these two great powers share, regardless of the history that ties us.”

Otherwise, he said, the world will be “collectively condemned to a pas de deux” by the US and China in which everyone else is “reduced to being nothing but the sorry spectators of a collective impotence”.

All of this meant the world must build a new order, the French leader said, urging Europe to “fully shoulder its responsibility”.

“Given the size and military might of the contenders, we can only imagine and be aghast at the terrible toll on human life and property that shall be inflicted if the ‘word war’ deteriorates into a real war of nuclear weapons and missiles,” he told the UNGA on Wednesday.

Both Indonesia and the Philippines reject Chinese claims over the South China Sea.

In his pre-recorded speech, his first to the UNGA, Duterte stressed a UN tribunal ruling upholding the Philippines’ rights over parts of the disputed waters claimed by China.

“The award is now part of international law, beyond compromise and beyond the reach of passing governments to dilute, diminish, or abandon,” Duterte said. “We firmly reject attempts to undermine it.”

The statement was seen as the Philippine leader’s strongest so far on the South China Sea dispute, given his previous pronouncements downplaying the issue in exchange for Manila’s closer geopolitical and economic ties with Beijing.

Lamenting the intensifying tensions, Duterte said: “When elephants fight, it is the grass that gets trampled flat”.

Then imploring countries with interests in the South China Sea and other global flashpoints, he said: “If we cannot be friends as yet, then in God’s name, let us not hate each other too much.”