Hundreds of whales dead after stranding off Australia’s Tasmania 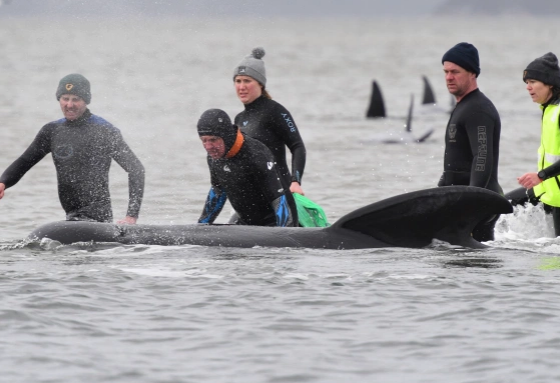 Rescuers trying to free a pod of whales stuck on sandbars off Tasmania have found more stranded animals, raising the total to 470 and making it one of Australia’s biggest beachings.

As the rescue effort entered its third day on Wednesday, rescuers said they spotted another large group of about 200 pilot whales during an aerial reconnaissance of remote Macquarie Harbour, on the rugged and sparsely populated west coast of Tasmania.

Most were believed to be dead.

“They didn’t look to be in a condition that would warrant rescue,” said Nic Deka, regional manager of Tasmania’s Parks and Wildlife Service.

“Most of them appeared to be dead. If they can be saved, we’ll send crews over there to do that.”

The discovery makes this Australia’s biggest beaching in modern times and draws attention to a natural phenomenon scientists say has no known cause. The second pod of whales was found between seven and 10 kilometres (four to six miles) from the first group of 270 whales, with the distance and tannin-stained waters meaning rescuers did not spot them sooner.

Officials have expanded their search area to see if more whales are stuck nearby.

The rescue crew of 60 conservationists, skilled volunteers and local fish-farm workers are now concentrating their efforts on the survivors from the first pod, which are partially submerged.

“The best assessment that we’ve got from this morning is that somewhere between 50 and 70 whales are potentially still alive,” Deka said.

“So they’re the animals that we’re focusing our efforts on.”

Rescuers spent Tuesday wading waist-deep in the cold shallows to free about 25 whales, using boats fitted with special slings to guide them back to the open ocean.

A few of the rescued whales became re-stranded overnight in line with predictions by whale behaviour experts, but Deka remained upbeat about the rescue mission as several more were freed on Wednesday.

“The good news is the majority of whales that were rescued are still out in deep water and swimming,” Deka told reporters in the nearby town of Strahan.

“They haven’t stranded. So, we’ve been more successful than not.”

Pilot whales are a species of oceanic dolphin that grow to 7 metres (23 ft) long and can weigh up to 3 tonnes. In 1996, 320 pilot whales washed up on the coast of Western Australia, in what was at the time the country’s biggest mass stranding.

About 600 pilot whales beached in nearby New Zealand in 2017.

Some researchers have suggested the highly sociable whales may have gone off track after feeding close to the shoreline or by following one or two whales that strayed.

“We’re not at a point where we’re considering euthanasia … but it is always something that we have at the back of our mind,” Carlyon said.

“We’re all optimistic about getting more off today. We’re still very hopeful.”

Malaysia’s Anwar Ibrahim says has majority to form new government
‘War will benefit no one’: Global concern over US-China tensions