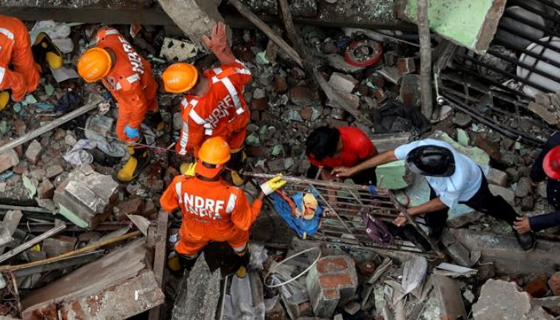 A three-storey building on the outskirts of Mumbai has collapsed in the early morning hours as residents slept inside, killing at least eight people, according to local reports.

A further 20 to 25 people are reportedly trapped in the building in Bhiwandi, Satya Pradhan, the chief of the National Disaster Response Force (NDRF), said in a tweet on Monday.

More than 40 emergency workers had arrived at the scene, an official told AFP news agency, including a team of 30 rescuers from the NDRF.

The accident in the city of Bhiwandi, about 40km (25 miles) from Mumbai, occurred around 3:40am local time (22:10 GMT on Sunday), local authorities said.

Television showed a pile of rubble with rescuers climbing ladders to get to anyone still inside and deploying dogs to search for survivors.

The building had been on a list of dangerous buildings and a notice for it to be vacated had been issued, the Times of India reported, citing Pankaj Ashiya, a commissioner in the Bhiwandi-Nizampura City Municipal Corporation.

Last month, at least 13 people were killed after a five-storey building collapsed in Mahad, an industrial town about 165km (100 miles) south of Mumbai.