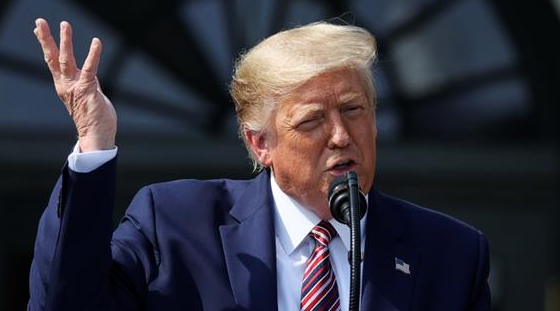 Redfield says vaccine will not be ready until summer 2021, but US president claims weeks and says CDC chief ‘confused’.

The International Federation of Red Cross and Red Crescent Societies (IFRC) warned that the novel coronavirus is driving discrimination towards vulnerable communities in Asia, including migrants and foreigners.

The humanitarian agency surveyed 5,000 people in Indonesia, Malaysia, Myanmar and Pakistan and found about half blamed a specific group for spreading the coronavirus, with many mentioning Chinese people, immigrants and foreigners.

“It is particularly concerning that both national migrant and foreign workers are blamed for the spread of COVID-19 as they are quite vulnerable already,” Dr Viviane Fluck, one of the lead researchers and the agency’s Asia Pacific community engagement and accountability coordinator, told the Reuters news agency.

She said there should be more focus on combating “rumors that are linked to underlying power dynamics and structural issues of inequality”.

Russia’s death toll from the novel coronavirus passed 19,000, as the country reported 144 new deaths in the previous 24 hours.

Norway’s Hurtigruten has called off its remaining cruises this year due to the rise in COVID-19 cases in Europe and the Americas, the company said.

The decision affects Hurtigruten’s so-called expedition cruises, which often take passengers into Arctic or Antarctic waters, though its business of shipping goods and people between ports along the Norwegian coast will continue.

The company was the first cruise operator worldwide to return an oceangoing cruise ship to service in mid-June, touting reduced passenger capacity, social distancing and strict rules on hygiene.

“Lab capacity is one of the bottlenecks, or one of the challenges in significantly increasing that capacity,” Argar told Sky News.

Britain can avoid further local restrictions and another national lockdown by sticking to the rules such as not meeting in groups of more than six people, minister added.

The Czech Republic reported more than 2,000 new COVID-19 cases in a single day for the first time as it battles a surge in infections that is among the fastest in Europe.

The health ministry recorded 2,139 cases of the new coronavirus on Wednesday, up from a previous record 1,675 reported for the previous day.

Ukraine set a daily record with 3,584 new coronavirus infections, the national security council said, up from a figure of 3,144 on Sept. 11.

Nearly half of people in four Asian countries – Indonesia, Malaysia, Myanmar and Pakistan – blame certain groups for spreading COVID-19 including foreigners, people attending religious ceremonies and those who do not follow the rules on matters such as mask wearing or physical distancing.

Viviane Fluck, the community engagement and accountability coordinator at the International Federation of the Red Cross and Red Crescent Asia Pacific, which carried out the survey, described the findings as alarming.

“We are very concerned that vulnerable groups such as migrants and those who cannot afford protective equipment may be discriminated against due to stigma and fear,” she said in a statement. The survey also found nearly four out of five people distrusted social media, despite it being one of the leading sources of information about the virus.

05:00 GMT – The journey not the destination, airlines offer flights to nowhere

More of the Asia Pacific’s embattled airlines are offering “flights to nowhere” as the pandemic grounds international travel, according to Reuters news agency.

Qantas is the latest to join the trend, offering a seven-hour flight over Australia’s Outback and Great Barrier Reef, which apparently sold out in 10 minutes despite a starting price of 787 Australian dollars ($575). Taiwan’s EVA Airways and Japan’s ANA have also offered special sightseeing flights.

Tough border restrictions to keep the coronavirus under control have led to a 97.5 percent plunge in international travel in the region, according to the Association of Asia Pacific Airlines.

04:40 GMT – Syria cases may be much higher than figures suggest: UN

The United Nation’s top humanitarian official says coronavirus could be much more widespread in Syria than official figures suggest.

Mark Lowcock told the UN Security Council in New York on Wednesday that it would only be possible to get a clearer picture of the situation when testing was stepped up. He noted that the source of nearly 90 percent of confirmed cases could not be traced to a known source, suggesting widespread community transmission.

Syria has confirmed 3,618 cases of the virus.

India has reported another record jump in daily coronavirus cases confirming 97,894 cases in the last 24 hours, according to the health ministry.

Deaths, which have been relatively low so far, are also climbing. The country has recorded more than 1,000 deaths every day for the last two weeks.

London Fashion Week is due to get underway later on Thursday with a livestreamed show from the luxury British brand Burberry.

The show will be broadcast online at 12:00 GMT with Riccardo Tisci, its Italian designer, promising an uninhabited wilderness show in a collaboration with German artist Anne Imhof that has been described as a “radical meeting of fashion and art”.

Around 80 designers will present their latest collections during the six-day event, but only a handful will stage the kind of physical shows that in pre-COVID times drew hordes of industry insiders, celebrities and journalists from around the world.

Malaysia’s Top Glove is due to report record profits later on Thursday, thanks to a surge in sales as a result of the coronavirus.

Analysts are expecting the company – the world’s biggest manufacturer of rubber and nitrile gloves – to announce a profit of at least 1 billion Malaysian ringgit ($241 million) for the three months ended August 31, its fiscal fourth quarter.

Top Glove is benefitting from higher prices and a surge in demand as a result of the coronavirus, but it has also been criticised over its treatment of migrant workers. US customs imposed an import ban on its products in July over forced labour concerns.

Crowds of as many as 40,000 people will soon be able to attend major sporting events in Sydney after the New South Wales government announced a relaxation of coronavirus restrictions.

The new rules – allowing stadiums to be filled to 50 percent capacity – come into effect on October 1 as the National Rugby League and Rugby Championship approach the end of their seasons.

Stadium Australia, the arena built for the 2000 Olympics, will be able to welcome 40,000 fans, the new Western Sydney Stadium in Parramatta 15,000 and the Sydney Cricket Ground 23,000.

Fans will have to wear facemasks going into the stadiums, but will be able to take them off inside, where they will be seated in “chequerboard” arrangements to allow physical distancing, the NSW government said.

New research shows holders of temporary visas in Australia suffered increasing racist abuse after they were left out of the government’s economic support schemes and Prime Minister Scott Morrison said it was time to go home.

In a survey of more than 6,000 temporary visa holders, a quarter said they had experienced racist abuse, and a quarter reported people avoiding them because of their appearance.

“Over 1,600 participants described being targeted with xeonphobic slurs, treated as though they were infected with COVID because they looked Asian or haraassed for wearing a face mask,” said Professor Bassina Farbenblum, an associate professor at UNSW Law, who worked on the study with Laurie Berg, an associate professor at UTS Law. The two are co-directors of the Migrant Worker Justice Initiative. “Many reported that because off their Asian appearance they were punched, hit, kicked, shoved, deliberately spat at or coughed on by passers-by in the street and on public transport.”

More than one million people live in Australia on temporary visas including international students, backpackers, and refugees. The survey found 70 percent of respondents lost all or most of their work as a result of the pandemic, with one in three international students expecting their funds to run out by next month.

Brazil’s president Jair Bolsonaro has apppointed a general with no experience in health as the country’s new health minister.

General Eduardo Pazuello was given the job on a temporary basis four months ago, but will now be made permanent. He has been more willing to go along with Bolsonaro’s approach to the pandemic than his predecessors, including recommending doctors prescribe hydroxycholoroquine to treat COVID-19 despite there being no evidence of it being effective.

Bolsonaro, who’s dismissed the virus as a “little flu”, brandished a box of the drug as Pazuello was sworn into office in Brasilia.

Australia’s prime minister Scott Morrison says the number of people allowed into Australia will rise by 2,000 from next Friday, according to public broadcaster ABC.

The states, who will have to house the arrivals in hotel quarantine have yet to give their approval.

About 4,000 people are currently allowed into Australia each week, but at least 25,000 are stranded overseas because of the cap on arrivals. Many Australians also say they have been bumped from flights home repeatedly.