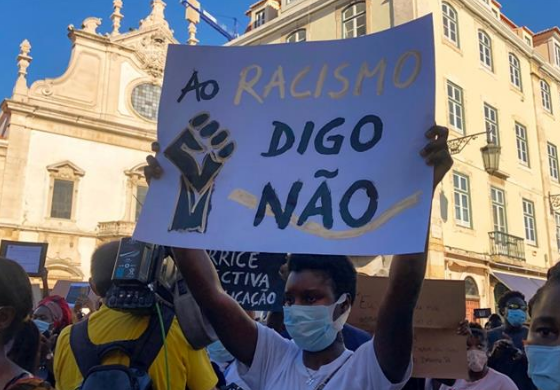 Intellectuals such as Cornel West and Achille Mbembe call on Portugal to act after series of racist attacks.

Just over a month ago, Mamadou Ba was having dinner with friends when he received an email warning of “measures” against him and his family if he failed to “terminate political functions and leave Portuguese territory” within 48 hours.

There were nine other recipients, including three members of Parliament.

“This isn’t something particularly new for me,” Ba told Al Jazeera. “Last year, I had to move house after I received multiple death threats from neo-Nazi individuals who had made my address public on Facebook.”

Ba is an anti-racism activist and heads SOS Racismo. The Portuguese citizen, born in Senegal, arrived 23 years ago as a student.

In August, SOS Racismo’s headquarters were at the centre of what local media described as a “Ku klux klan style parade”, where individuals were seen carrying torches and wearing white masks.

“It is harder because of my children, my son is 15 years old and very aware of everything that has been happening, young kids feel things differently.

“This shows there is a real issue of racism in Portugal, and there is a struggle to fight.”

Given the threats, he was recently given police protection.

The abusive email came amid rising concerns over the far right and reports of racism, at times deadly, in Portugal.

In early September, the Cameroonian philosopher Achille Mbembe and American intellectual Cornel West joined dozens of activists and academics around the world in signing an open letter calling for solidarity with the Black movement in Portugal, demanding accountability and concrete change to transform the “reality of structural racism and its manifestation in police brutality, racist violence and racial harassment in Portugal”.

The European Network Against Racism (ENAR) has also sought action from authorities in a letter endorsed by 16 members of the European Parliament and 72 civil society organisations, condemning recent cases of police brutality and racist attacks.

In February, Claudia Simoes, who is Angolan-Portuguese, was kicked by a policeman and placed in a chokehold outside a bus station in front of her daughter, after forgetting her child’s bus pass.

She was then put in a police car where she was allegedly attacked and subject to racial slurs. She was eventually hospitalised and diagnosed with severe traumatic brain injury, local media reported.

Simoes was charged while in hospital for resisting arrest. But following protests demanding the police officer’s suspension, the officer was charged.

According to local media reports, a senior police official later said all he saw in the video was a “police-officer doing his job”.

There had been an earlier confrontation – the man had reportedly told Cande: “II have weapons from the colonies, and I’m going to kill you.”

In early 2019, police officers in Lisbon, who has been called to intervene on an issue between two residents in the Bairro da Jamaica neighbourhood, were then captured on video beating and pushing several residents.

In December 2019, 21-year-old Cape-Verdian student Luis Giovani Rodrigues was murdered by a group of eight men after leaving a party at a local bar in Porto. Many speculated this was a racially motivated attack, but police deny this, blaming “alcohol”, “futile motivations” and the “culture of the latino macho”, local newspaper Publico reported.

In February 2020, during a match between two Portuguese teams, French-Mali football player Moussa Marega was subject to racial slurs by fans of the opposing team. They also threw seats from the stand at the player. Moussa abandoned the pitch, and later condemned the referees for not taking a stance.

Also in February, amid carnival festivities in Lisbon’s Cais do Sodre area, a young Brazilian woman was allegedly beaten by two police officers and later taken to hospital.

According to Publico, police admitted the detention “resulted in injuries”, but said she attacked a police officer and force was necessary to “restore the order”.

These are the more prominent cases, but SOS Racismo has collected data on more than 700 racially motivated crimes since 2012.

“There is a gap between the legal framework and the way in which people are really protected on the ground,” she said.

The Portuguese Criminal Police and Intelligence Services have acknowledged the rise in abusive behaviour, saying they were investigating threats which they considered to be a “jump in confrontation, towards sovereign bodies” that “previously did not exist”, according to Publico newspaper.

For the first time in Portugal, Afro-descendants are becoming more visible in the public sphere. People are affirming their perspectives and their rights, and in doing so, populist and far-right politicians look to attack these rights.

Ba says there have been more threats since the 2019 election, when Chega (Enough) became the first far-right party to win a seat in Parliament since the end of the former authoritarian regime, which ended in 1974.

“Individuals like Andre Ventura (leader of the party) are openly racist and normalise these discourses in Parliament and media,” he said.

Ventura often downplays racism as a motive for extreme violence; in the case of Marques, the actor, Ventura wrote on Twitter: “Nothing in this murder points to crime of racial hate,” and accused the left-wing party Bloco de Esquerda of using the crime to “spread ideological distortions”.

Boaventura de Sousa Santos, professor of Sociology and director emeritus of the Centre for Social Studies at the University of Coimbra, frames the rise of Portugal’s far right within the context of wider global movement.

“There has always been a far-right base as is the case in Spain, Italy, Greece – the far-right was in power for 50 years in Portugal – and this basis never disappeared.”

The election of Chega has “opened a door of political legitimacy” for existing far right and neo-Nazi groups.

“They now have a party,” he said. “Even those who don’t want to be labelled as extremists now have a place where they can do so without problems of consciousness.

“Chega say they aren´t racist – that they are against ethnic minorities being privileged – so their idea is that the victims are the aggressors. This is the inversion that the far right does all over the world.”

In the case of Portugal, Boaventura Sousa Santos notes there are various degrees in which “conservative discourse comes close to reactionary discourse”.

Alvaro Vasconcelos, former director of the European Union Institute for Security Studies and founder of Forum Demos, points to a “contagion effect” of the far right across the world.

“Similar to what happened in Spain, which was seen as an exception until the emergence of Vox,” he said. “We have the legacy of the colonial heritage in Portugal, which was never questioned, in terms of the ideas that were crucial for the Portuguese far-right during colonialism – which was the ‘Salazar’ rhetoric that Portugal was not a racist country.

In January, Ventura sparked outrage after saying a Black member of Parliament, Joacine Katar Moreira, should be “returned to her own country”.

“For the first time in Portugal, Afro-descendants are becoming more visible in the public sphere. People are affirming their perspectives and their rights, and in doing so, populist and far-right politicians look to attack these rights,” said Vasconcelos.

He believes the far-right party will continue to grow.

“The real fear is not that Chega will be elected in Portugal, but rather that its discourse contaminates that of other right-wing parties and centre-right parties, as has happened in other European countries. The real risk is if tomorrow the democratic right in Portugal feels that it needs an alliance with Chega to govern.

“The government and the president have not been responding thoroughly to Ventura’s racist statements. They consider, wrongly, that to respond is to give him publicity. Racism is a crime and should be treated as such.”