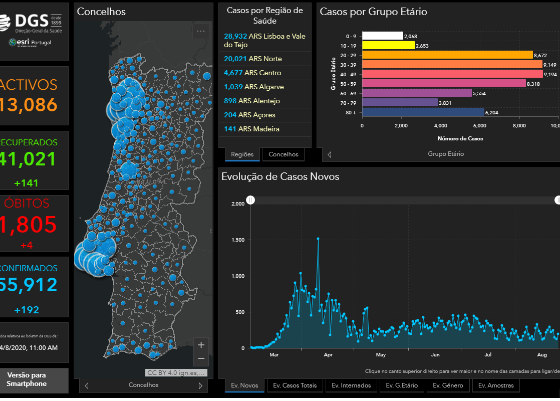 Portugal registers four more deaths related to Covid-19 and 192 new confirmed cases of infection in the last 24 hours, according to the epidemiological bulletin of the Directorate General of Health (DGS) released today.

According to the DGS newsletter, since the beginning of the pandemic until today, there have been 55,912 cases of infection and 1,805 deaths.

The Lisbon and Tagus Valley region registered the most new cases in the last 24 hours, with 116 confirmed infections, accounting for 28,932 cases.

Three of the four deaths occurred in the region of Lisbon and Vale do Tejo, which now totals 652 deaths, and one in the Northern region which accounts for 846 deaths and 20,021 cases (49 more in the last 24 hours).

In the Azores two more cases were registered in the last 24 hours and in Madeira one more case.

The Azores total 204 cases since the beginning of the pandemic and 15 deaths, and Madeira 141 cases and no deaths by covid-19.

According to the bulletin, 141 more patients recovered, totalling 41,021 cases of recovery.

The DGS also indicates that there are four more patients hospitalised, totalling 325, and three less in intensive care (41) compared to Monday.

The data also indicate that there were 25,151 men and 30,761 women infected since the beginning of the pandemic.

The highest number of deaths is concentrated in people over 80 years old, with 1,204 deaths recorded since the beginning of the pandemic, followed by ranges between 70 and 79 years old (356).

Three of the deaths recorded in the last 24 hours were from people aged 70 to 79 years and the other from a person over 80 years old.

Health authorities have 33,821 people under surveillance (567 less than the day before).