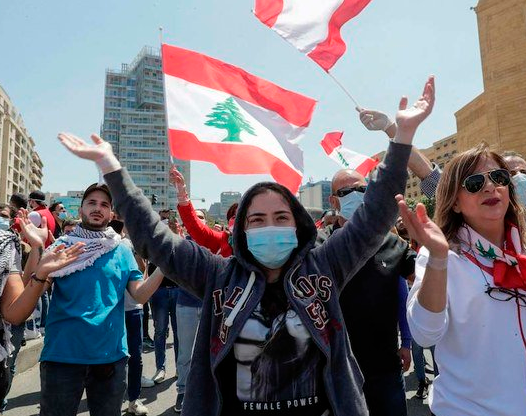 Lebanon minister calls for two-week coronavirus lockdown. After record high of 439 cases on Sunday, total number of COVID-19 cases in Lebanon is 8,881 with death toll at 103.

The French government is sending riot police to the Marseille region to help enforce mask requirements, as more and more towns and neighbourhoods are imposing mask rules starting Monday to slow rising infections.

Government spokesman Gabriel Attal said 130 police officers are being sent to the Marseille region, which expanded its outdoor mask requirements to all farmers’ markets and more neighbourhoods Friday.

France has seen scattered incidents of violence by people refusing to wear masks. Paris expanded its mask requirements Saturday, and other towns around France started requiring masks outdoors on Monday.

President Nana Akufo-Addo has indicated that Ghana’s Kotoka International Airport may reopen next month after measures are set in place to test arriving passengers for coronavirus.

“Under my instructions, the ministry of aviation, the Ghana civil aviation authority and the Ghana Airports Co Ltd, have been working with the ministry of health and its agencies to ascertain our readiness to reopen our airport,” Akufo-Addo said.

“I want to ensure that we are in a position to test every single passenger that arrives in the country to avoid the spread of the virus,” he said, adding the airport might be reopened on September 1.

Thailand’s economy is expected to see its biggest slump in more 20 years due to the pandemic.

Gross domestic product (GDP) is expected to shrink by between 7.3 and 7.8 percent this year, said Tossaporn Sirisamphan, secretary-general of the governmental National Economic and Social Development Board.

An earlier forecast put the decrease at between 5 and 6 percent. It would be the biggest annual contraction since the 1998 Asian financial crisis.

Hong Kong has reported 44 new coronavirus cases as the government announced an extension to physical distancing measures aimed at controlling further spread of the virus, which has resurged in the city since early July.

While the number of daily cases have come down from triple digits in recent weeks, authorities have cautioned residents from becoming complacent, warning that the situation remained “severe”.

Restrictions, including a ban on dining in restaurants from 6pm and the mandating of masks in all outdoor public areas, are set to remain in force until August 25, the government said in a statement on Monday.

09:20 GMT – Ireland has no plans for more local lockdowns

Ireland’s health minister said he has had no conversations with his public health team about implementing other local lockdowns and the government’s intention remains to lift two-week restrictions in the counties of Kildare, Offaly and Laois.

Health officials will meet on Monday to decide if further measures are needed to slow a sharp increase in the spread of the coronavirus that the government and officials find deeply concerning.

The land crossing between Malaysia and Singapore has reopened as the neighbours further relaxed curbs first imposed in March.

Business travel of up to 14 days is allowed, while some Malaysians who are employed in Singapore can cross the border to go to work.

An estimated 300,000 commuters crossed the frontier each day before a lockdown was imposed in Malaysia on March 18. Singapore initiated its lockdown on April 7. Both have since eased restrictions, but borders remain closed to tourists.

A Philippine government minister has tested positive for coronavirus five months after an initial diagnosis, authorities said, as experts investigate whether he had been re-infected.

He was first diagnosed with COVID-19 in March, but did not show any signs of the disease at the time.

US drug developer Novavax Inc said it is starting a mid-stage study of its experimental COVID-19 vaccine in South Africa, which is experiencing a surge in coronavirus cases.

The Phase 2b trial study of NVX-CoV2373 will be conducted on about 2,665 healthy adults and will evaluate safety and immunogenicity in about 240 medically stable, HIV-positive adults, the company said.

“Because South Africa is experiencing a winter surge of COVID-19 disease, this important Phase 2b clinical trial has the potential to provide an early indication of efficacy, along with additional safety and immunogenicity data for NVX-CoV2373,” said Novavax research chief Gregory Glenn.

Russia reported 4,892 new coronavirus cases on Monday, pushing its tally to 927,745, the fourth-largest in the world.

Authorities said 55 people had died across the country in the last 24 hours, increasing Russia’s official coronavirus death toll to 15,740.

Lebanon should be locked down for two weeks after a spike in COVID-19 infections, the caretaker government’s health minister said.

“We declare today a state of general alert and we need a brave decision to close (the country) for two weeks,” Hamad Hassan told Voice of Lebanon radio.

South Korea has warned of tighter coronavirus restrictions as new outbreaks appear, including one linked to a church where more than 300 members have been confirmed infected but hundreds more are reluctant to get tested.

The outbreak linked to the Sarang Jeil Church in Seoul is the country’s biggest in nearly six months and led to a tightening of distancing rules on Sunday.

The Sarang Jeil outbreak revived fears seen in February when authorities were struggling with an outbreak that emerged in a secretive Christian sect in the city of Daegu and became the country’s deadliest cluster.

Malaysia’s northern state of Penang has barred entry by overseas visitors seeking medical treatment until it finalises new health and safety procedures in light of the coronavirus crisis.

Authorities toughened curbs on movement in some parts of the island over the weekend, as new infections emerged after more than three months with no cases.

Bavarian authorities say they have not been able to contact 46 of more than 900 people who tested positive for coronavirus upon entering Germany, but didn’t receive the results, AP news agency reported.

Last week, Bavaria admitted that thousands of returning travellers had to wait for weeks to receive their test results – including the more than 900 who tested positive but were not aware.

The bureaucratic breakdown led to an uproar in Germany over concerns that those who unknowingly tested positive could spread the virus. Germany has reported a total of 224,014 cases and over 9,200 deaths.

India reported a daily jump of 57,981 infections, taking the total to nearly 2.65 million, third only behind the US and Brazil.