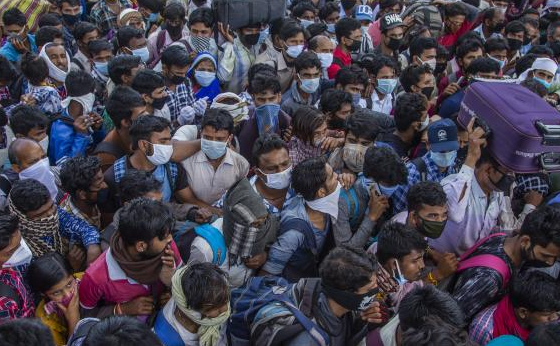 UK to impose quarantine for all arrivals from France and the Netherlands as COVID-19 cases continue to surge.

An inquiry into how thousands of passengers were allowed to disembark in Sydney from the virus-infected cruise ship Ruby Princess has slammed health and border officials.

The inquiry’s report released on Friday found it was “inexplicable and unjustifiable” that health officials made a “serious and material error” on March 19 when it rated the cruise ship as “low risk” and allowed 2,700 passengers to leave the ship without waiting for checks for the coronavirus.

It was the mistake that spread COVID-19 across the country. Seven hundred passengers were later found to be infected and spread the virus to friends and relatives around the country.

Belgian hospitals are stockpiling drugs and protective kits and putting in place contingency plans amid a continuing spike in new COVID-19 infections that has forced the capital Brussels to make face masks compulsory in public spaces.

With nearly 10,000 deaths linked to the coronavirus so far, Belgium with a population of 11 million has one of the world’s highest death rates from COVID-19 per head.

In March and April when the pandemic accelerated, Belgian hospitals struggled with a shortage of equipment and with administrative hurdles.

“We have stocked up on curare, anesthetics and antibiotics that allow us to last for two or three months during any second wave that might arise,” chief physician Michel Dewever at the Delta Hospital in Brussels, told Reuters news agency.

The French government has declared Paris and the Bouches-du-Rhone area around Marseille on the Mediterranean coast as “red” zones with a high coronavirus infection risk, according to a new government decree published.

The measure follows a sharp increase in COVID-19 infections over the past two weeks.

Territories with confirmed cases of COVID-19

06:45 GMT – UK says it has no choice over quarantine for French arrivals

Britain had no choice but to impose a 14-day quarantine on all arrivals from France from Saturday in order to protect public health domestically, transport minister Grant Shapps said.

“It’s a dynamic situation, and I don’t think that anybody… would want us to do anything other than protect public health and public safety,” Shapps told Sky News.

“That does mean where we see countries breach a certain level of cases … then we have no real choice but to act,” he added.

“Cabinet has agreed to maintain our current settings for an additional 12 days, bringing us to a full two weeks in total,” Ardern said.

Since four people tested positive on Tuesday – the first cases in community transmission in 102 days – New Zealand has detected a cluster of 30 virus cases.

Most of those cases have been found around Auckland, a city of 1.5 million people who have been asked to stay at home.

Authorities are still struggling to find out how the virus came to return to New Zealand, which had earned global praise for its handling of the crisis.

Vietnam’s health ministry has registered to buy a Russian COVID-19 vaccine as the Southeast Asian country fights a new outbreak of the coronavirus following months of no local cases.

Russia said the first batch of the world’s first COVID-19 vaccine would be rolled out within two weeks, rejecting as “groundless” the safety concerns aired by some experts over Moscow’s rapid approval of the drug.

The ministry did not say how many doses of the Russian vaccine it had ordered, or when it expected to receive them. Vietnam’s own home-grown vaccine will be available by the end of 2021, the ministry said last month.

India’s coronavirus death toll overtook the United Kingdom’s to become the fourth-highest in the world as authorities reported another single-day record increase in confirmed infections.

According to the Health Ministry, India reported 1,007 deaths in the past 24 hours. Its total rose to 48,040 deaths, behind the United States, Brazil and Mexico.

New Zealand’s Health Minister Chris Hipkins said two of the 13 new infections reported on Friday were found in the North Island town of Tokoroa, around 210km (130 miles) south of Auckland, the site of the country’s latest outbreak.

But Hipkins played down fears the virus could now be rampant elsewhere.

“All of the cases so far are connected, they are all part of one Auckland-based cluster, that’s good news,” he said, adding that the Tokoroa cases were identified quickly.

“We’ve seen no evidence of a COVID-19 case outside of Auckland that is unrelated to the cluster we are dealing with.”

All but one of the cases had been linked to an existing cluster of cases in Auckland whilst the thirteenth was still under investigation.

“We are now asking that all positive cases and, where relevant, their family members or household members, transfer to the quarantine Auckland facility in Auckland for those Auckland based cases,” Bloomfield said.

The figure marks the highest one-day jump in domestic cases since the end of March, according to the Korea Centers for Disease Control and Prevention (KCDC).

Prime Minister Chung Sye-kyun said authorities will be forced to consider elevating social distancing measures in the Seoul metropolitan area – something policymakers had been reluctant to do over economic concerns – if transmissions continue to rise. Eighty-three of the new cases were logged in the capital.

He pleaded for citizen vigilance during a three-day holiday that continues through Monday and criticised plans by some activist groups to hold rallies in Seoul on the weekend despite the city’s ban.

Kim Jong Un, the supreme leader of North Korea, has lifted a lockdown in a major city near the border with South Korea where thousands had been quarantined for weeks over coronavirus worries, according to state media.

The Korean Central News Agency (KCNA) said Kim made the decision at a ruling party meeting on Thursday. The North Korean leader said it was clear after three weeks that the virus situation in Kaesong was stable and expressed gratitude to residents for cooperating with the lockdown.

Kim also insisted the North will keep its borders shut and rejected any outside help as Pyongyang carries out an aggressive anti-virus campaign and rebuilds thousands of houses, roads and bridges damaged by heavy rain and floods in recent weeks.

Peru surpassed half a million coronavirus cases on Thursday and now has Latin America’s highest rate of death, according to health ministry data.

The Andean country has 507,996 confirmed cases and 25,648 related fatalities. Peru’s death rate stands at 78.6 per 100,000 people, according to a Reuters tally, a number higher than hard-hit regional neighbors Chile and Brazil.

President Martin Vizcarra blamed the recent spike in infections on an uptick in social and sporting events and a lax attitude by the public.

“There has been too much confidence on the part of the population,” Vizcarra said. “Let’s learn from history, correct mistakes and now we are united despite the discrepancies in some of the decisions that are made.”

Vizcarra on Wednesday banned family gatherings, reinstated a blanket Sunday curfew and extended lockdowns to five more regions of the country as figures revealed a 75 percent surge in infections among children and adolescents.