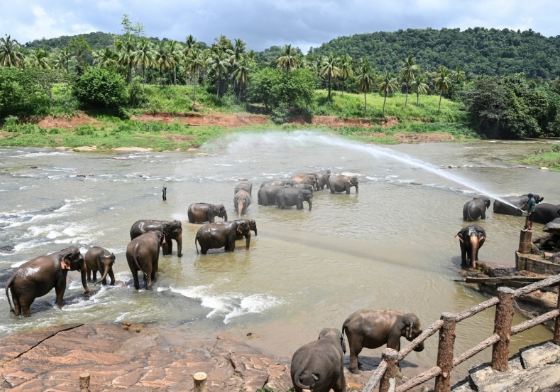 Conservationists say country’s lockdown has helped reduce the death toll from clashes between elephants and humans.

Sri Lanka’s coronavirus lockdown has helped reduce the death toll from clashes between elephants and humans, conservationists have said.

Sumith Pilapitiya, a conservationist and former director-general of the government’s wildlife department, estimated that the number of elephant deaths decreased by 40 percent during the coronavirus lockdown, which started in March and officially ended in June.

A record 405 elephants were killed by humans in the country last year, up from about 360 in 2018. A total of 121 people were killed by elephants, up from 96 the year before, according to government data.

Speaking ahead of World Elephant Day on Wednesday, Jayantha Jayewardene, a leading international expert on elephants, told AFP: “We can say that the human-elephant conflict eased during curfews.

“But this is a temporary situation. Farmers will start defending their crops and the killings will resume.”

Most of the killed elephants are shot dead or poisoned by farmers trying to keep them off their land. The animals are considered sacred on the majority-Buddhist island and are protected, but prosecutions are rare.

Most of the humans are killed by elephants who have seen their habitat drastically reduced, rampaging in villages looking for food.

Pilapitiya said an average of 240 elephants were killed annually between 2010 and 2017 and the rate had accelerated since.

“The Asian elephant is classified as ‘endangered’, so we cannot afford to lose elephants at that rate,” he told AFP.

Pilapitiya expressed hope that a “significant reduction” during the shutdown – which included nationwide stay-at-home orders, with people only allowed out to buy essentials – would bring down the overall toll for the year.

Sri Lanka’s elephant population has declined to about 7,000 according to the latest census, down from 12,000 in the early 1900s.

Pilapitiya said a new panel of experts on measures to reduce human-elephant conflicts in the country would have its first meeting on World Elephant Day.

“This may be an auspicious beginning and hopefully the government will implement the recommendations of this committee,” he said.

During the shutdown, Pilapitiya accompanied wildlife trackers who reported spotting baby elephant twins at the Minneriya sanctuary northeast of Colombo, the first pair seen in the wild in Sri Lanka and a rare sight anywhere.

But the shutdown of wildlife parks during the pandemic saw an increase in poaching and illegal hunting of all wild animals, prompting the government to order a crackdown in July.

“Incidents of elephant-human clashes were few, but there was an increase in killing animals for their flesh,” he said.

While the lockdown officially ended on June 28, Sri Lanka’s borders remain closed to foreign tourists. And that has badly hit some residents who rely on the country’s elephants for their income.

The Pinnawala Elephant Orphanage closed during the lockdown, fearing the animals might contract the virus. It opened again last month, but its 84 elephants are mostly undisturbed by visitors.

“Hardly anyone visits here during the week,” said Suneth Sanjeeva, who operates a shop outside the elephant orphanage, 80 kilometres (50 miles) east of Colombo.

A restaurant owner nearby said she served about 200 guests before the pandemic, but now she hardly has any customers.