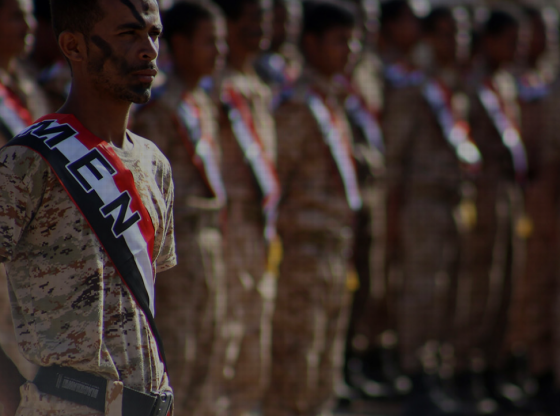 In what came to be known as the September 21 Revolution of 2014; in exploitation of the effects of the February 11 Revolution of 2011 in Yemen; and following four years of political conflict, Houthi forces captured the Capital of Sana’a in an attempt to abolish the centres of power. As a result, a wave of armed conflict erupted across Yemen, tearing the state and its institutions apart.

This move effected a different political, security and social scene, along with new entities of influence that divided regions of Yemen among themselves and consolidated their presence on the ground through new military formations. Today, four major military establishments are fighting for control of these same Yemeni regions.

In Yemen, to almost effortlessly and overnight become a high-ranking military officer or commander; to benefit from the shreds of war; and to accumulate profit while others bow to death and devastation, one must simply be close to those of the warring parties.

Following the Saudi-led Arab Coalition Forces’ March 2015 military intervention in Yemen, confrontations spread, further raising the oppositions’ needs for fighters. At an unprecedented pace of polarisation, the warring parties began recruiting men from tribes and civil supporters of political streams to fight on their behalf.

The different parties used several tactics to recruit fighters from civilians, and gain their loyalty; namely, by promoting them to senior military ranking, in flagrant violation of Yemeni law. The promotions subsequently turned into a corruption hub inside the camps of both the legitimate government and the Houthis, as reported by activist Mani’ Suleiman, a former civic education media officer, affiliated to the forces of internationally-recognised Yemeni President Abedrabbu Mansour Hadi.

The problem is not the legal or illegal nature of the resolutions and promotions, but rather the exceptions made in dealing with the law. These exceptions created problems within the Ministry of Defense and National Army. The promotions were made by the corruption lobbies that favour their affiliates at all expense.

Yemeni Law prescribes for promotions in military and security agencies at all levels of military ranks through two major acts: Act No. 15 of 2000 on the Organisation of Police Forces, and Act 67 of 1991 on Service in Armed and Security Forces.

The acts provided for eligibility criteria for promotions, including Article 43 of Act 15 of 2000 on the Organisation of Police Forces, which states that, “promotion from the rank of second lieutenant to the rank of captain shall affect officers who spent a minimum number of years in service in each [lower] rank, who are fully qualified, and who pass successfully the educational courses and tests of fitness for each rank, as provided for in executive regulations.”

Article 44 of the same Act (15) provided for the time limits of service in any rank, stating precisely that promotion to the rank of Major requires a minimum of 24 hours in military service.

Many other acts and regulations govern promotion in Act 67 of 1991.

Additionally, Article 31 of the Act on Exceptional Recruitment and Promotions in the Armed Forces emphasises that it is prohibited to promote non-commissioned officers to an officer rank, but they may be recruited to the rank of second lieutenant if they fulfill the terms and conditions of the executive regulations.

Provisions of Law No. 67 of 1991 on Service in Military and Security Forces:

Article 29 defines the general terms for promotion from one rank to another:

Article 30 states that the minimum time of service for each rank must be fulfilled in addition to other terms for promotion from one rank to another:

The documents we found demonstrate violations of military acts by the warring parties. A senior Ministry of Interior officer, who asked to remain anonymous, explained that resolutions to promote civil and military rank officers violate Yemeni law. Furthermore, an officer with an MA in Military Sciences added that these promotion decisions fundamentally contradict both the Yemeni laws that govern the military and security establishment, and the employee theory detailed in the Civil Service Law.

Brigadier General Abdelqawi Taher, a former officer in the Yemeni army, described the resolutions issued during the war as in violation of Yemeni law.

General Jamal Al-Riyassi, a former officer in the Yemeni army explained: “to be promoted to the rank of general, an officer must spend a long period of time in military service and be fully devoted.” He added: “Promotions in military forces should be conducted through a senior officers’ committee according to the terms and requirements. An officer needs to spend a minimum term of four years in the rank of lieutenant colonel to be promoted to colonel and an additional three years for a higher rank. Exceptional promotions are sometimes made for one rank, only with clear justifications.”

The warring parties in Yemen deliberately abstained from publishing any documents or resolutions relating to the promotions they made. However, ARIJ obtained a number of documents that prove that the government of President Hadi granted illegal promotions in the armed and security forces. These resolutions include a decision to promote Salafi sheikh, Adel Abdu Fare’ Al-Makni “Abu Al-Abbas” , who is listed on the international terrorism list, to the rank of colonel although he had never served in Yemen’s army or security forces.

Another resolution issued by President Hadi, which triggered broad debate, was the promotion of a Ministry of Education employee, Mohammad Hassan Abdullah, first to the rank of colonel and then to Head of Military Prosecution in Taaz. This is evidenced in the documents.

According to a senior military official in the Hadi-affiliated army, who requested to remain anonymous, in the past five years, around 2,500 officers have been illegally promoted to different military ranks, as shown in the documents.

On the other hand, based on Houthi-issued documents, it appears that a number of field commanders and civil officials were promoted to senior military ranks. This includes the promotion of Mahdi Al-Mashat, Head of the Houthi Government’s Political Council, to the rank of field marshal – the most senior military rank.

The Houthis also promoted Abdelkareem Al-Houthi, who is close to the group’s leader, to the rank of Major, and appointed him Minister of Interior. Documents also revealed other illegal promotions carried out by the Houthis for their affiliates and fighters in the past five years.

Attorney Omar Hamyari comments, ‘in Houthi-controlled areas, speaking of armed forces means referring to appointments made on the basis of personal loyalty to Abdelmallek Al-Houthi and his personal and family life as well as his idea of building a religious state.’ He added, ‘the forces were established in a manner that totally contradicts the very concept of an army and military forces. As a result, all formations violate values, and the very idea of national duty. They must be revised.

Legitimacy based on illegitimate decisions

In an attempt to understand the official position of Hadi’s forces regarding the promotions that took place, we contacted the official spokesperson of the national army, Brigadier General Abdu Majalli, to present us with some facts. However, after initially agreeing to the interview, he apologized at the last minute. We did however meet the military spokesperson of the Taaz Command Abdelbaset Al-bahr, who tried to justify the promotions by political criteria of eligibility, including participation in battles and leadership of different fronts.

Al-bahr says: ‘according to the law, for any civil servant to be promoted to a military rank, s/he must be nominated by a committee of officers. The nomination is submitted to the Chief Command of the Armed forces, who then issues a decision to promote the official in question to a rank consistent with their qualifications, military history, contribution to military forces, and their leadership in battles.’

Al-Bahr’s declarations contradict effective Yemeni law, and are condemned by several interviewed from the legitimate authority including field marshal Abdelqawi Taher, who confirmed that the law does not allow for the promotion of a civil servant to a senior military rank under any circumstance.

A war, sparked by the Houthis, and justified by abolishing the centres of influence and protecting Yemenis from the misgivings of political entities. The retaliation of Hadi’s government justified by restoring legitimacy in Yemen. Now, war has erupted, and the legitimacy of the constitution has been shaken, laying the foundation for a new path — a path in which only the sound of weapons are heard, and one where the law goes to hell.

Azeris Angry Over Government Funding Religious Events During Pandemic
Why Is It So Hard For Jordanians With Disabilities To Get Work?