Lebanon’s banking, economic and political systems were already under threat before the explosion 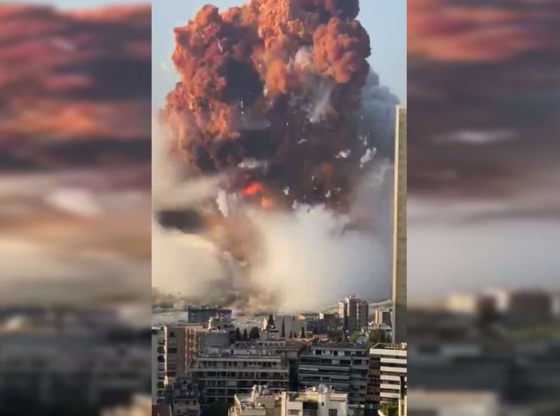 The massive blast that hit Lebanon’s capital on Tuesday has delivered yet another devastating blow to a country already rocked by crises.

Well before the explosion, and even the coronavirus pandemic which upended the world, Lebanon was in the midst of the worst economic crisis in its history.

Half its population of 6 million lives near or below the poverty line and hundreds of thousands of people have lost their jobs.

The nation’s currency has more than halved during the crisis, with people’s savings locked up in inaccessible bank accounts.

And the pandemic has only further laid bare the strain the whole system is under. There have been fuel shortages, blackouts, soaring prices and hunger. Hospitals have been overwhelmed.

And now there has been an explosion in the capital.

“This scene reminds us of what happened in Hiroshima and Nagasaki,” the Governor of Beirut told Sky News Arabia after the explosion.

“I haven’t seen massive destruction in my life on this scale. This is a disaster, a catastrophe, nothing but a national catastrophe.

“We don’t know how we’re going to deal with this situation at a time when we can’t even walk outside our homes.”

What was happening in Lebanon?

The heavily indebted country has been sliding deeper into trouble since October last year.

Slowing capital inflows at the time only added to the country’s worsening economic situation, sparking what was dubbed the October revolution as protesters hit the streets in droves.

The demonstrations resembled the 2011 Arab revolts that toppled four presidents. Protesters demanded an end to corruption, accusing leaders of using their positions to enrich themselves for decades through favourable deals and kickbacks.

By January, Lebanese politicians had still failed to agree on a government or an economic rescue plan, leaving many angry at the lack of progress since Saad al-Hariri was forced to quit as prime minister in October.

“The state left us with two choices: we either die from hunger or we die from the disease … Let us at least die taking a stand,” one protester said back in April.

Banking and economic crises leaving many in poverty

But the political crisis has almost paled in comparison to the banking and economic one.

Before the pandemic hit, the World Bank had projected 40 per cent of Lebanese people would be in poverty by the end of 2020, a forecast which the Economy Minister believes is now outdated.

In October, according to the BBC, a shortage of foreign currency led to the Lebanese pound losing value against the US dollar on a newly emerged black market for the first time in two decades.

The situation has only gotten worse in the months since. Despite the official rate standing at $US1 to 1,500 Lebanese pounds, the rate available to average citizens is much higher.

In May, food and clothing costs surged 190 per cent and 172 per cent respectively from a year earlier, according to official data cited by Credit Libanais.

Hyper-inflation is now a big concern after being recorded in Lebanon last month. CNN reported that a widely used app that tracked the black market exchange rate showed $US1 would buy about 8,200 Lebanese pounds for average citizens as at 6:30pm (AEDT) on Wednesday.

Lebanon’s Reserve Bank has also come under heavy criticism since last year. A former central bank vice governor and others have described its so-called financial engineering as a “Ponzi scheme” because it has relied on fresh borrowing to pay back existing debt.

As that has unravelled, the whole system has suffered. Many citizens have been unable to access their savings.

With anger mounting, some banks have been repeatedly torched during rioting. In response, they have fortified their facades and locked their ATMs behind metal shields.

The BBC reported Lebanon’s public debt-to-gross domestic product (what a country owes compared to what it produces) was the third highest in the world even before the pandemic.

But any hopes of a quick rescue deal with the International Monetary Fund have been dashed, with talks complicated by a row between the Government and central bank. Any bailout would require tough economic reforms.

In March, the nation defaulted on its debt instalments for the first time in its history. And the shutdown of many businesses during the pandemic has only worsened Lebanon’s economic outlook.

With the heavily indebted state struggling to pay its own bills, residents must pay for private generators because the Government cannot provide reliable power. Even the water is unsafe to drink.

Parts of the capital Beirut now get just a few hours of electricity a day in the summer heat. Some residents have said the blackouts have been worse than during the 1975-1990 civil war.

The blackouts have also caused a strain on hospitals, which are using ageing generators as back up. Concerns over a lack of healthcare funding have prompted warnings the system may also soon face a crisis.

From mid-March, the Government imposed a strict lockdown to slow the spread of coronavirus.

Many people could only leave their homes to buy food or medicine and an overnight curfew banned people from going outside between 8:00pm and 5:00am. Security forces enforced the rules.

After preparing to wind back restrictions in May, the lockdowns were renewed again amid a surge in cases.

Today Lebanon is still under some strict restrictions, with some shops only trading on Tuesday and Wednesday this week.

Given the limited trading, crowds of shoppers often build up, with people stocking up for the week ahead. It is unclear how many people may have been nearby when the blast occurred.

The explosion itself was the most powerful in Beirut in years, and it revived memories of when the Lebanese endured heavy shelling, car bombings and Israeli air raids in the 1975-90 civil war.

As one emergency management expert has suggested, the Lebanon blast has “illustrated the dramatic impacts of a low-probability, high-consequence disaster event”.

“Around the world, first responders to catastrophic disasters are often community members,” says Andrew Gissing, the general manager of Resilience at Risk Frontiers, a consultancy that provides research and modelling on natural disasters.

“A major disaster occurring concurrently with the COVID-19 pandemic will introduce additional complexity to any response effort.

“After the initial response efforts have concluded, the impacted communities will be faced with a longer effort to ultimately recover from this disaster.”

Lebanon is heavily reliant on food imports to feed its population. In May, the Prime Minister wrote an article in the Washington Post warning the country was at risk of a major food crisis due to the pandemic.

Now its main entry point could be out of action for who knows how long.