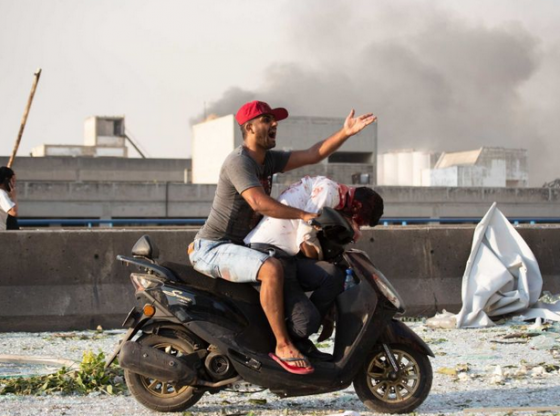 A massive explosion has rocked Lebanon’s capital Beirut, killing at least 100 people, injuring almost 4,000, flattening much of the port, and sending a shock wave that damaged buildings across the city.

The massive blast in Beirut was captured by onlookers who were filming the fire at the port.

Prime Minister Scott Morrison said one Australian had been killed and Australia’s embassy had been “impacted significantly” in the explosion.

“We can report all of the staff there are well, but the building that the embassy is in has been significantly compromised. I’m pleased that apart from some cuts and scratches, our staff are all OK,” he said.

“But our sympathies to all of the people of Lebanon. There is such a large Lebanese Australian community here and they would be worried about loved ones.”

On Wednesday evening, the Australian Government pledged $2 million to help Lebanon recover from the blast.

The funding will be split between the United Nations’ World Food Programme and the Red Cross movement to provide food and medical care.

Warning: The story contains images that may distress some readers.

Foreign Minister Marise Payne said some embassy staff were hit by flying glass when the building’s windows were blown out.

Footage of the incident showed white smoke billowing from a large fire at the port, with small flashes and explosions, before an enormous blast which sent a shockwave roaring out over the city and a giant red cloud billowing into the sky.

The explosion destroyed homes, offices and other buildings around the port district.

Officials said they expected the death toll to rise further as emergency workers dug through rubble to rescue people and remove the dead.

It is the most powerful explosion in years to hit Beirut, a city on the Mediterranean Sea home to roughly 2.2 million people, which is already reeling from an economic crisis and a surge in coronavirus infections.

Many have lost jobs, while the worth of their savings has evaporated as the currency has plunged in value against the US dollar and many have been thrown into poverty.

Beirut hospitals quickly filled beyond capacity, pleading for blood supplies and generators to keep their lights on.

Dozens of ambulances ferried the injured from the port area, where the wounded lay on the ground.

One medic said 200 to 300 people had been admitted to a single emergency department.

“I’ve never seen this. It was horrible,” said the medic, who gave her name as Rouba.

There have been reports of damaged buildings at least 10 kilometres from the blast.

Mr Morrison said there were normally around 20,000 Australians in Lebanon, although he did not know how many had returned home because of COVID-19.

Opposition Leader Anthony Albanese, along with fellow Labor MPs Penny Wong and Andrew Giles, expressed their “deepest sympathies to those affected by the horrifying explosion”.

“A difficult year has been made so much harder, for so many. Australia should work with authorities in Lebanon to offer whatever support we can,” they said in a statement.

‘This is a disaster, a catastrophe’

He said 2,750 tonnes of ammonium nitrate had been stored for six years at the port without safety measures, which was “unacceptable”.

Port general manager Hassan Koraytem told Lebanese news channel OTV the material had been put in a warehouse on a court order, and there had been multiple requests for it to be re-exported.

Two documents seen by Reuters showed Lebanese Customs had asked the judiciary in 2016 and 2017 to request that the “concerned maritime agency” re-export or approve the sale of the ammonium nitrate.

“We requested that it be re-exported but that did not happen,” Badri Daher, director-general of Lebanese Customs, told broadcaster LBCI.

An orange-coloured cloud was seen over the site after the explosion. Orange clouds of toxic nitrogen dioxide gas often accompany an explosion involving nitrates.

Prime Minister Hassan Diab has appealed to all countries and friends of Lebanon to extend help to the small nation.

He reiterated his pledge that those responsible for the massive explosion at Beirut’s port would pay the price, without commenting on the cause.

Abbas Ibrahim, chief of Lebanese General Security, said the incident might have been caused by highly explosive material that was confiscated from a ship some time ago and stored at the port.

The explosion struck with the force of a magnitude 3.5 earthquake, according to Germany’s geosciences centre GFZ.

There are reports the blast was felt in Cyprus, an island nation more than 160 kilometres away.

At the scene, the Governor of Beirut, Marwan Abboud, told Sky News Arabia he had come looking for a team of firefighters who disappeared in the explosion.

“This scene reminds us of what happened in Hiroshima and Nagasaki,” he said.

“I haven’t seen massive destruction in my life on this scale. This is a disaster, a catastrophe, nothing but a national catastrophe.

“We don’t know how we’re going to deal with this situation at a time when we can’t even walk outside our homes.”

Lebanese media and social media flooded with requests for information from relatives and friends.

The recovery effort is continuing, while many injured victims are being transferred to hospitals outside Beirut.

Qatar, Kuwait and Iraq are sending field hospitals to Lebanon.

Public officials said it would take months to repair the damage to the city’s infrastructure and buildings.

Without offering any evidence, US President Donald Trump said the US military believed the explosion was caused by a “bomb of some kind”.

“They seem to think it was an attack,” Mr Trump said.

Two US officials, speaking on the condition of anonymity, told Reuters it was not clear where Mr Trump received his information.

They said initial information did not appear to show the explosion was an attack.

The explosion occurred three days before a UN-backed court is due to deliver a verdict in the trial of four suspects from the Shiite Muslim group Hezbollah over a 2005 bombing which killed former Prime Minister Rafik al-Hariri and 21 others.

Mr Hariri was killed by a huge truck bomb on the same waterfront, about 2 kilometres from the port.

Israeli officials said the country had nothing to do with blast and said Israel was ready to give humanitarian and medical assistance. Israel has fought several wars with Lebanon.

‘Balconies were blown off buildings’

Video taken by residents showed a fire raging at the port, sending up a giant column of smoke, illuminated by flashes. Local TV stations reported that a fireworks warehouse was involved.

The fire then appeared to catch at a nearby building, triggering a more massive explosion, sending up a thick cloud and a shock wave over the city.

“It was like a nuclear explosion,” said Walid Abdo, a 43-year-old school teacher in the neighbourhood of Gemayzeh near Beirut.

Charbel Haj, who works at the port, said it started as small explosions like firecrackers, then the huge blast erupted and he was thrown off his feet. His clothes were torn.

“I saw a fireball and smoke billowing over Beirut. People were screaming and running, bleeding. Balconies were blown off buildings. Glass in high-rise buildings shattered and fell to the street,” a witness told Reuters.

Another witness said she saw heavy grey smoke near the port area and then heard an explosion and saw flames of fire and black smoke.

“All the downtown area windows are smashed and there are wounded people walking around. It is total chaos,” she said.

Kilometres from the port, streets were covered with glass, bricks and lined with wrecked cars. Motorcyclists picked their way through traffic, carrying the injured.

Hospital overwhelmed but no tears among ‘tired’ locals

Cherine Yazbeck, a producer at the ABC’s Beirut bureau, said she had taken an injured man to Najjar Hospital, about three kilometres from the blast, because there were no ambulances or taxis available.

The hospital was overwhelmed, she said, with the director reporting inadequate staff and drug supplies to treat the wounded.

However she said locals, weary from political instability and the coronavirus pandemic, were not showing signs of panic.

“After the economic crisis, corona and now this, everybody is tired, nobody was crying,” she said.

“You hit someone in the face once, twice, three times … and then there’s no reaction anymore.”

The head of Beirut port and the head of customs both said on Wednesday that several letters were sent to the judiciary asking for the dangerous material be removed, but no action was taken.