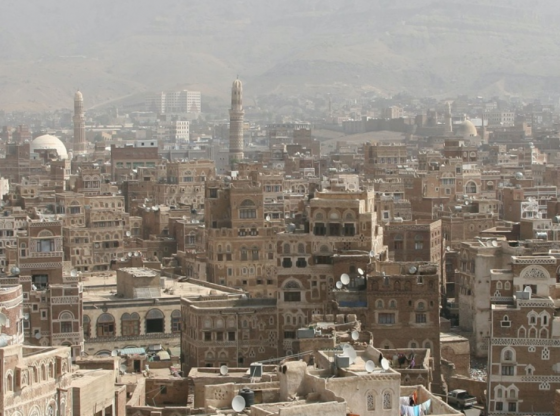 In January 2010, former Minister of Culture Muhammad Abu Bakir Al-Muflihi announced the launch of 500 million rials (or $2,272,000) worth of cultural projects, as part of the Ministry’s Heritage and Cultural Development Fund. However, to date, none of these projects have been implemented — not even the restoration of the ancient Dar Al-Hamad Palace or any of Sanaa’s antique houses.

This was not the first or last time projects were directed but never actualised. The article on restoring Dar Al-Hamad appeared in the Fund’s budget between 2005 and 2015, and was even at the top of the statements issued by officials praising the completion of dozens of projects classified within the Ministry of Culture’s “achievements”. However, the Ministry’s declarations contradict with the findings of the journalist conducting this investigation, which proves that the so-called “cultural projects” in fact constitute an opportunity for the acquisition of the Fund’s resources that are estimated at being worth millions of dollars.

Funds allocated to projects and other activities related to the Fund’s mission are transferred to savings that do not spill over to the following year. Instead, the money is spent through various avenues and on items other than those to which they are allocated. This investigation reveals that the sums go to the benefit of Fund employees, the Ministry and other politically loyal people in charge of the money.

Yemeni officials from the Ministry of Culture attribute the lack of cultural activity to the scarcity of funds. However, this investigation reveals that there are recurring practices that devour billions of rials collected from Yemeni citizens in the name of “supporting cultural development”. The negligence of various supervisory bodies including the Supreme National Authority for Combating Corruption, the Central Organisation for Control and Auditing, and the ministries of Finance and Civil Service, enables these practices to occur.

The Heritage and Cultural Development Fund was established by Law No. 11 of 2002 with the aim of “contributing to cultural development, establishing infrastructure for cultural work and preserving archaeological sites”. However, documents obtained by the investigator reveal that public officials seized about 80% of the Fund’s money. This is in conflict with Article 14 of the law, which stipulates that money may not be spent outside the scope of the goals set for it.

Data from the Fund indicates that 90% of the total expenditures of its third spending avenue originally designated for cultural activities were transferred to aid and donations for people, most of whom were Ministry of Culture employees. In 2010, 479 million rials ($2,150,000) was allocated to the same stream of expenditure, 429 million ($1,900,000) of which was categorised under “rewards and gifts”. In 2011, the Fund spent 66 million rials ($330,000) in the form of gifts and bonuses, which is double the basic salary according to the Fund’s accounts. These practices occur in a war-torn country which is not only the poorest among Arab states but also ranks at 151 from 177 countries on the Human Development Index (HDI).

Ministers of Culture usually rely on a well-established legal and political system that protects them from legal accountability, except in certain cases. The trial of senior officials of the rank of Deputy Minister or higher is conditional upon a direct decision by the President of the Republic. Alternatively, it could be proposed by one-fifth of the members of the House of Representatives. The proposal then has to be approved by two-thirds of the members according to Article 10 of Law No.6 of 1995 regarding the accusation and trial of those who hold positions at the Supreme executive authority. Moreover, Article 128 of the Yemeni Constitution grants the President of the Republic immunity from prosecution except in three cases: high treason, constitutional breaches or infringement upon the country’s independence and sovereignty.

The National Anti-Corruption Strategy reports that the legal articles mentioned above top the list of reasons that “corruption continues to dominate and spread vertically and horizontally”.

Official records show that most of the allocations for capital projects were transferred into rewards. This is in spite of the fact that wages mentioned in the first stream of funding constitute 61% of the Ministry of Culture’s total budget and 19% of the Fund’s budget, which is 1,250,000,000 rials ($6 million).

Employees of the Ministry of Culture and its Fund receive 200 million rials ($1 million) annually from the Heritage Fund, which also allocates 111 million rials ($500,000), in the form of bonuses and petty cash for its employees, to the Minister and to his entourage. Payment vouchers show that, in contrast, the support of governmental and private cultural institutions does not exceed 104 million rials ($400,000). These are disbursed to beneficiaries in cash without going through banks.

The Fund management scrambles budgets, which is against both the Financial Law and the Executive Regulations of Wages that set overtime compensation and bonuses to between 40% to 80% of the basic salary and make it conditional to cap it at 25% of the number of employees.

Basic and contractual salaries constitute 13% of the total of the first avenue of funding with an annual average of 90 million rials ($450,000). In contrast, an analysis of the Fund’s financial statements from 2003-2014 by a chartered accountant shows that bonuses form four times the allocated amount, at 370%.

There are years where the Fund’s resources increased to more than 700 million rials. In those years, wages, fixed dues and administrative requirements continued to account for 88% of its budget, while the share of activities relevant to the Fund’s primary function did not exceed 12%.

Yet, this percentage does not reflect actual Fund activity; for example, the manuscript inventory, restoration and documentation project has been ongoing since 2007, and its estimated cost is 5 million rials ($20,000) per month. Interviews held by the investigator with management and employees at the Fund confirmed that this amount was reduced to wages for unofficial employees in the manuscript library in Sana’a.

The Board of Directors is supposed to be formed according to Article 6 of the Fund Law, and it grants the representatives of the Ministry of Culture the authority to make decisions. However, from its inception, and until the preparation of this investigation, the authority remained in the hands of the successive ministers while the Fund remained without a board of directors or regulations.

“It is not in the interest of the Minister to form a board of directors because that would limit his authority,” explains Walid Dammaj, who was Executive Director of the Fund for two terms.

Dammaj, who worked with Al-Ruwaishan and Obel, stated that: “We would inform the Minister that the orders he issued were in violation of the law in general, and he would respond by telling us to disburse the money anyway.”

In response to the investigator’s questioning, former Minister of Culture Obel says he formed four committees to assess the Fund’s performance in order to save it from its dire condition. Obel was content with his defence of the disbursement of funds to what he called “the talented and creatives”. He considers this a better alternative than the sums going to the “pockets of the Fund’s employees”. Regarding the formation of the Fund’s Board of Directors, Obel explained that he contacted Prime Minister Mohammad Salem Basandowa in 2012 to discuss the matter, to no avail.

The former minister attributes the failure in forming a board of directors to the government’s preoccupation with complex issues such as the Transitional Justice Law.

Obel, who ascended to his position by virtue of Yemen’s Youth Revolution, took formal steps without considering recommendations from the committees he formed, including spending money on cultural activities and not on individuals, according to data gathered by the investigator.

The investigator attempted to contact Minister Al-Ruwaishan several times; by calls, SMS and WhatsApp, to give him an opportunity to respond, but he did not. It was not at all possible to communicate with Minister Al-Muflihi, and word was that he was abroad.

When Sana’a was celebrated as the Arab Capital of Culture in 2004, hundreds of cultural activities were organised and more than 500 books published. This was able to happen due to the allocation of a budget to the occasion and the collaboration of several parties to make it successful. Bar this celebration, the Fund has consistently maintained a trend of wasting resources, and once that year drew to a close, cultural activities had reverted to the state they were in previously, according to official statistics as well as the attached documents.

Former director of the Yemeni Centre For Musical Heritage, Jaber Ali Ahmad, explains that if it had not been for the efforts of Jean Lambert, the director of the French Centre for Archaeology and Social Sciences in Sana’a, the 2006 UNESCO-implemented project “Song of Sana’a”, that documented the capital’s rich musical heritage, would not have materialised. Ahmad also recalled how the Heritage Fund did not respond to funding requests for a number of cultural projects that he had proposed.

The Fund adapts its spending according to the resources it receives during the year. For example, if its budget is 700 million rials ($2,800,000), it spends that amount in the same year. However, in the various cases of increase and decrease in funds, priority is given to the expenditure avenues that benefit Fund and Ministry employees. This explains the inflation of overtime pay, travel allowance,hospitality and assistance.

In 2007, the Fund’s resources dropped to 300 million rials ($1,700,000), which was less than half of its resources from the previous year which stood at 787 million rials ($4 million). To counter this deficit, the provision designated for supporting cultural establishments and activities was transferred to a sum that the Ministry spent on wages and service requirements. Over-expenditure in these categories was estimated at 48.3% and 107.9% respectively. Excess spending also reached 800% in the name of donations and grants from the third clause. In 2013, the Fund’s revenue increased by 3.8%, most of which was spent in the same year.

In addition to being illegal, these donations lack standards, as they are disbursed based on nepotism and political loyalty. A secondary theatre actor, for example, receives an allowance of 60,000 rials ($240) a month in addition to his salary from the Ministry. On the other hand, an unemployed dissident poet is paid 5,000 rials ($20) a month, according to the lists of beneficiaries that also include 39 dead people. In another example, the name of the Egyptian writer Atef Awwad who was buried in Yemen in 2008 after he resided and died there, continued to appear on the payment vouchers of media staff until the end of 2014.

Official and independent statistics show that there are a large number of non-governmental, cultural institutions whose activities have expanded compared to the number of government institutions. Despite this, government authorities receive the lion’s share of the “crumbs” that remain from the annual Fund support. The Fund’s management reports that in October 2014, 238 institutions benefitted from Fund support. Of these, 102 NGOs received 30,990,000 rials ($144,000), whereas government agencies comparatively received 70% of the estimated annual support at 100 million rials, which was worth just under half a million dollars at the time.

The annual average of the total budgets of the Fund, the Ministry of Culture and its affiliated bodies is estimated to be 3 billion rials ($12 million). These allocations, however, have had no impact in terms of cultural development. The number of projects implemented by the Ministry of Culture during 2003-2008 did not exceed 12 projects, most of which were in the area of buying furniture with a value of 867,755,000 rials ($4,800,000). In contrast, Fund data shows that it disbursed 1,200,000,000 million rials ($6,185,000) in the form of monthly dues to its own and Ministry employees during the same period.