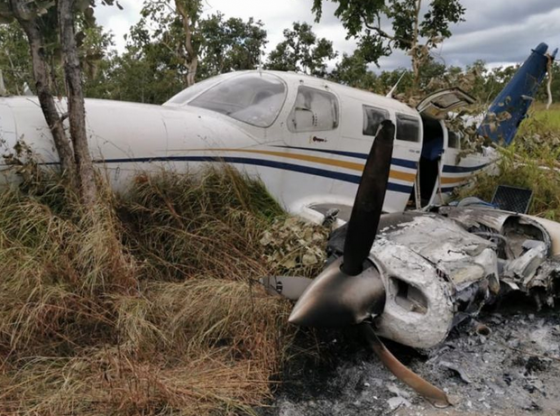 An organised crime syndicate attempted to smuggle more than 500 kilograms of cocaine into Australia, but the small plane loaded with the drugs crashed while trying to take off in Papua New Guinea.

The criminal gang was already being watched by police as part of a two-year investigation, and five people were arrested in Queensland and Victoria shortly after the plane took off.

The Cessna 402C was found empty with its pilot missing near what appeared to be a makeshift runway at Papa Lea Lea, about 30 kilometres north-west of Port Moresby, on Monday.

The plane had taken off from Mareeba in Far North Queensland on Sunday morning, and had flown at an altitude of less than 1,000 metres in an attempt to avoid radar detection, before landing at Papa Lea Lea.

Police alleged the plane was loaded with the cocaine — worth about $80 million on the street — and was attempting to fly back to Australia, but crashed as it was trying to take off.

The Australian Federal Police (AFP) said they “cannot rule out that the weight of the cocaine had an impact on the plane’s ability to take off”.

After finding the wreckage, police in PNG said they believed several Papua New Guineans were involved in removing drugs from the plane before it was discovered.

The Australian pilot handed himself in to the Australian consulate in PNG on Tuesday and has already faced court in Port Moresby, charged with illegal entry into the country.

Late on Friday night, police in PNG — working with the AFP — retrieved 28 bags believed to contain cocaine, and an unspecified amount of Australian dollars.

PNG Police Commissioner David Manning said investigations were ongoing, but police did have “an idea” of how the drugs were brought into PNG.

“What has posed serious concern for us now is that Papua New Guinea — from the size of this seizure — it is now confirmed that we are a transit point for such drugs,” Commissioner Manning said.

The AFP said the drug importation attempt was the work of a Melbourne-based crime syndicate with links to the Calabrian mafia Ndrangheta, based in Italy.

Two men allegedly involved in the attempt were arrested at Atherton on Sunday, about half an hour’s drive south of Mareeba where the plane took off.

They have already faced Cairns Magistrates Court on drugs charges.

A 36-year-old man from Liverpool in south-western Sydney was charged with conspiracy to import commercial quantities of controlled drugs and providing material support or resources to a criminal organisation.

A 31-year-old man from Hoppers Crossing in Victoria was also arrested near Atherton.

Police alleged he had been tasked with transporting the drugs via truck once they were flown into Australia.

Photos of the truck show hollowed-out sections in the back that police said were intended to hide the drugs.

Two further arrests were also made in Melbourne.

A 33-year-old Niddrie man and a 61-year-old Melbourne man appeared in Melbourne Magistrates Court on Monday, charged with conspiring to import commercial quantities of border-controlled drugs.

Those two men will be extradited to Queensland.

Assets worth $3.5 million, including three properties, shares, account funds and a motor vehicle have also been “restrained” by police as part of the operation.

“These arrests prove no matter how sophisticated or opportunistic organised crime’s attempts are, or the methods they use, law enforcement is keeping pace and causing maximum damage to these criminal ventures,” he said.

‘We will identify you’

At a media conference in Brisbane, Assistant Commissioner Lesa Gale said it was one of the biggest cocaine busts the AFP had ever made.

“This flight and its contents represents the worst of organised crime and the greed of syndicates trying to line their pockets at the expense and health of the Australian community,” she said.

Assistant Commissioner Gale said it was hoped the arrests would be a deterrent for other would-be drug traffickers.

“We will identify you, we will arrest you and we will prosecute you,” she said.

Queensland Police Assistant Commissioner Kath Innes said COVID-19 had caused some “challenges” for their investigation but it had also helped with tracking the alleged offenders.

“It has caused some issues,” she said.

“It certainly put another layer of process over it for us with border controls but that has assisted in some regards,” she said.