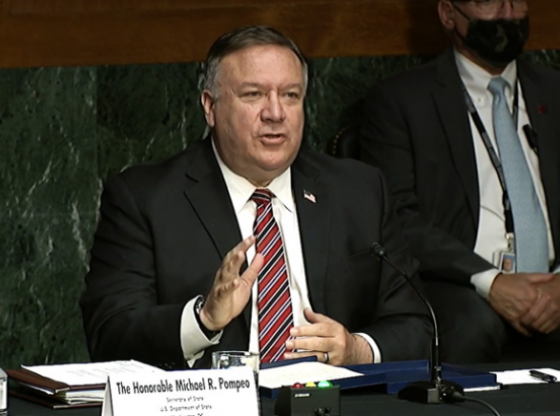 Sen. Lindsey Graham (R, South Carolina) revealed on Thursday that the Kurdish-led Syrian Democratic Forces (SDF), the partner of the anti-ISIS Coalition in northeast Syria, has signed a deal with an American oil company to modernize oilfields there.

Graham’s remarks came during testimony from Secretary of State Mike Pompeo before the Senate Foreign Relations Committee on the State Department’s budget for the next fiscal year.

Pompeo affirmed his support for the oil agreement and seemed to suggest that the State Department had played a key role in arranging it.

“I talked to General Mazloum yesterday, with the SDF,” Graham told Pompeo. “Apparently, they’ve signed a deal with an American oil company to modernize the oil fields in northeastern Syria. Are you supportive of that?”

“We are,” Pompeo replied, and Graham responded, “That would be a great way to help everybody in northeastern Syria.”

“The deal took a little longer than we had hoped,” Pompeo added, implying that the State Department had been involved in arranging it.

But “we are now in implementation, and it can be very powerful,” Pompeo added, as Graham praised him for the work.

Sen. Graham has long been supportive of the Kurds, in both Iraq and Syria.

After US President Donald Trump decided last year to withdraw US forces from northeast Syria, following a phone conversation with Turkish President Recep Tayyip Erdogan, Graham played a key role in securing a major modification of the move, and Trump agreed to leave a reduced number of troops in northeastern Syria to secure the oil fields there.

In 2016, Trump ran for president on a platform that included ending America’s involvement in wars in the Middle East—which began nearly 20 years ago, following the Sept. 11, 2001, attacks on New York and Washington.

The George W. Bush administration believed that it would finish “the war on terrorism” during its own term in office. Indeed, at one point, in late 2003, thinking that it had won in both Iraq and Afghanistan, the Bush administration even set as its goal the “transformation” of the Middle East through democracy.

“I thought we could do it all,” one senior White House official confessed to this reporter in 2007, as conflict persisted, and he recognized that the utopian objective was not attainable.

Now, many Americans have grown weary of what has been dubbed, “the forever war.” However, that does not apply to conflicts involving the Kurds, who enjoy broad support in the US, and, in any case, do the vast bulk of the fighting themselves.

Following Trump’s reversal on Syria, Graham explained that he had expected his decision to withdraw from Syria would be welcomed—but, instead, it prompted criticism, including from Trump’s base.

The President was “sort of surprised,” Graham explained, “that people didn’t stand up and cheer, when he said, we’re getting out of Syria.”

“The pushback from the Christian conservative community about us abandoning the Kurds was overwhelming,” Graham said.

On Wednesday, US officials announced a new set of sanctions on Syria, under the Caesar Act. However, as Pompeo affirmed, the new measures will not “hinder our stabilization activities in northeast Syria.”