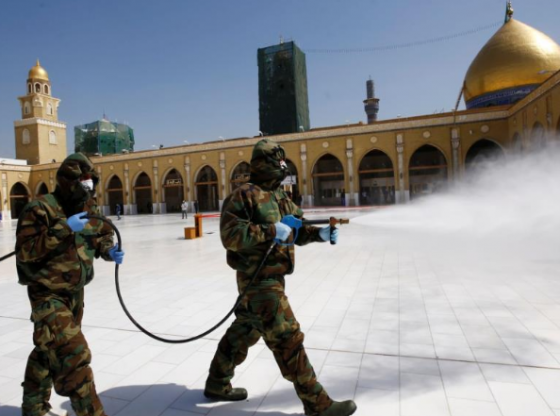 The Iraqi Ministry of Health and Environment announced 2,963 new cases of coronavirus and 68 deaths during the previous 24 hours on Thursday, causing the total confirmed infections in the nation so far to exceed 120,000.

The ministry said in a statement that 18,018 tests for the highly-contagious disease had been carried out in the past day.

Out of more than 980,000 tests that Iraqi health workers have conducted to date, 121,263 have tested positive with 4,671 fatalities among them. Over 31,000 patients remain in treatment centers, 446 of them in intensive care. The government has classified 85,546 as having recovered.

On Sunday, the Iraqi High Committee for Health and National Safety decided to impose a comprehensive curfew for the Eid al-Adha holiday, starting from Thursday and lasting until August 9.

The committee has also instructed security forces to strictly implement the restrictions during the curfew which include wearing masks, sterilization of public places, social distancing. Fines will be issued to those that violate the rules and vehicles that are used without special authorization will be seized.

Iraqi health authorities have been reporting increasingly higher numbers of coronavirus infections and, since Saturday, even topping the official tally of its eastern neighbor, Iran, from where the virus entered Iraqi territory in February.

The committee also instructed the Iraqi Media outlets to intensify educational and awareness programs aimed at curbing the spread of the virus.

Six civilians killed during attack by Turkish-backed forces in Manbij: report
Can Hollywood, Bollywood help with the COVID-19 crisis?