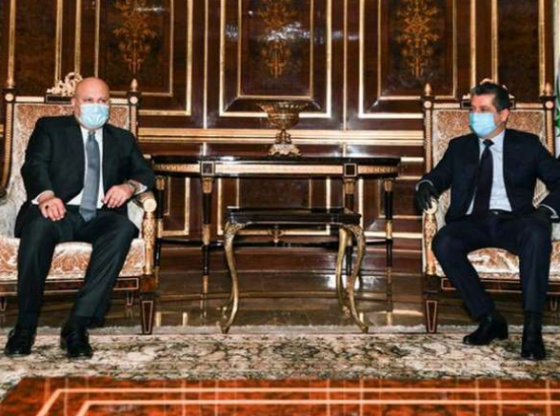 Kurdistan Region Prime Minister Masrour Barzani on Thursday stressed the importance of a swift trial for the accused members of the so-called Islamic State and extended the region’s willingness for more active cooperation in the trails.

Prime Minister Barzani made the comments in a meeting with the head of the United Nations Investigative Team to Promote Accountability for Crimes Committed by Da’esh (UNITAD), Karim Ahmad Khan, in Erbil.

During the meeting, Prime Minister Barzani and Khan spoke about the ongoing preparations for the trial and sentencing of Islamic State criminals.

Meanwhile, the special adviser and head of the UN investigation team highlighted the legal and technical measures to try terrorists on crimes committed against humanity.

Khan also mentioned the process of collecting evidence and electronic archiving for those crimes and thanked the Kurdistan Regional Government (KRG) for its coordination and cooperation.

On his side, Prime Minister Barzani stressed the need to expedite the prosecution of Islamic State criminals, stressing that the court would represent an important step to achieve justice and prevent the recurrence of such crimes in the future.

“We are ready to provide all forms of coordination and cooperation, and the Kurdistan Region must be an effective participant in the court’s procedures because it is the most affected by ISIS compared to the rest of the other regions,” Barzani concluded.