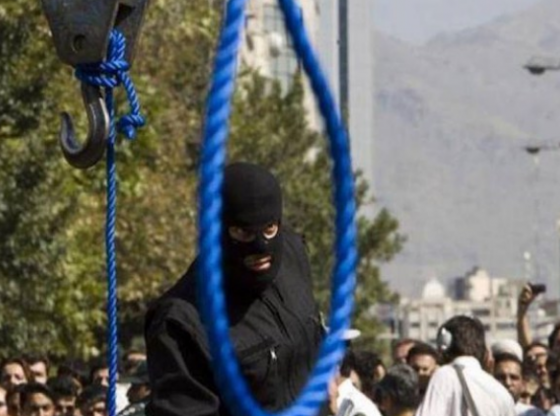 While Iran halted this week the executions of three young men linked to deadly fuel protests in November, the government continued to carry out death sentences of Kurds without much apparent notice among the international community.

“Unfortunately, five Kurds were executed in the prisons of Urmia and Kermanshah in the past few days. Another inmate, Hussein Osmani, who is sentenced to 30 years of imprisonment, was threatened with the death penalty,” Jila Mostajer, manager of the human rights watchdog Hengaw, told Kurdistan 24 on Tuesday.

Her organization later specified in a report that Osmani had been told he would be put to death this week.

She said that this threat was particularly concerning because it fits a pattern of events that have ended in the death of other political prisoners like Mansour Arvand, whom the courts initially handed a life sentence but was later executed.

A relative of Osmani told Kurdistan 24 that authorities had arrested him along with Sabir Sheikh Abdullah and Diyako Rasoulzadeh, both of whom were executed on July 14 after being convicted of involvement in a bombing attack in Mahabad in a trial rights groups have widely described as “unfair.”

“He was tortured into giving a false confession,” the relative said, adding that the family now fears that Osmani could face the same fate.

Multiple human rights groups credibly charge that Iranian interrogators routinely obtain confessions from prisoners through the use of torture, including for alleged crimes for which they are later executed.

On Wednesday, after Mostajer’s comments to Kurdistan 24, Hengaw also reported that another ethnic Kurd named Kamil Qaderi Aqdam who was arrested two years ago on charges of murder that the organization claims were trumped up, was hanged in the central prison in West Azerbaijan province on July 22.

This brings the total number of executions of Kurdish prisoners in just a week up to at least six, according to Hengaw.

These executions, said Mosajer, “lead us to one critical point: Discrimination again Kurds. Kurds make the majority of those executed in the recent years, yet they have been reported in the media rarely.”

She explained that the government and Persian-centric media leaves Kurdish views and even Kurdish deaths woefully underreported.

“Meanwhile, the Kurds have no independent media outlet. Most of the outlets are owned by or affiliated with political parties, which has made them rather loyal to the party political lines.”

Another rights group, the Kurdistan Human Rights Network (KHRN), said in a tweet that the death sentences of two prisoners, Asad Keshavarz and Amin Safarkesh, were carried out in Orumiyeh Central Prison on July 20.

“Due to the fact that Iran is a dictatorship now, executions and politically motivated death penalties have become a tool for their oppressions,” Mostajer said, noting that that at least 12 Kurds were executed during the Islamic month of Ramadan and several more remain on death row.

“Iran is both internally and internationally under a huge pressure, and that could lead to a massive public protest across the country at any given moment,” she said.

“The government in Tehran believes that such collective executions or rapid hangings could spread fear among people and prevent them from taking to the streets.”

She puts the blame not only on Iran’s government and media, however, saying “Kurds themselves have not worked efficiently on this issue,” adding that the majority of Kurdish executions have not even been reported to international human rights group like Amnesty International, which has often actively publicized them after receiving such information

Amnesty called on the UN and its member states in a report last week to quickly intervene to save the lives of those at risk of execution and urge Iran to stop using the death penalty to sow fear and silence political opposition. It also expressed concerns that death row prisoners from Iran’s disadvantaged ethnic minorities such as Kurds are at particular risk, given the authorities’ pattern of executing prisoners from these groups when concerned about the eruption of civil unrest.

“Iran’s increasing use of the death penalty as a political weapon for repression is alarming and warrants the immediate attention of the international community,” read the report.

The nation consistently ranks among those with the highest number of deaths sentences it issues and implements, with minority groups being significantly overrepresented among those killed.

The Persian hashtag #do_not_execute was used five million times after it was announced on Tuesday that the Supreme Court had upheld their death sentences, the BBC reported.

Conversely, the execution of Kurdish prisoners and the 10-year jail sentence handed to Kurdish language teacher Zahra Mohammadi last week does not appear to have gotten much attention from the wider Iranian public.

Arash Saleh, the Washington Representative of the Kurdish opposition group known as the Democratic Party of Iranian Kurdistan (PDKI), told Kurdistan 24 that the structural oppression of Kurds is not limited to policies of the current government.

“There are strong tendencies in current mainstream Persian media, Persian civil society, Persian journalists, and Persian activists to suppress the voice of Kurds in all levels,” he charged, adding, “These tendencies are still strongly under the effect Persian supremacism and cannot let the upper hand position of Persian culture go in Iran.”

As a result, he said, near-daily persecution of Kurds “never make the headlines… while a less severe situation such as the three months imprisonment of a Persian activist will stay on headlines of almost all leading Persian news agencies and websites across various political aisles for a long time.”