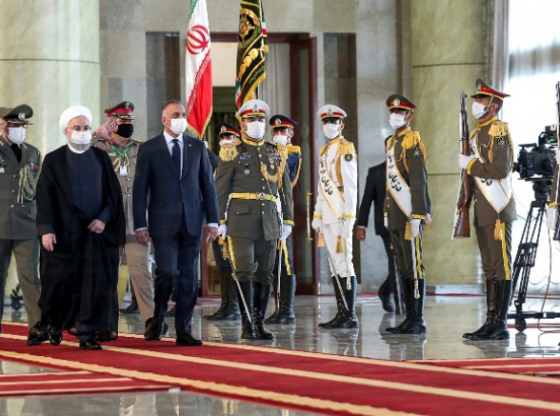 Marking his first trip abroad as the prime minister of Iraq, Mustafa al-Kadhimi met with Iranian President Hassan Rouhani following his arrival in Tehran on Tuesday.

Trade amid the coronavirus pandemic, which has only worsened in both countries in recent months, was among the topics that led the discussions. Kadhimi later met with Iran’s supreme leader, Ayatollah Ali Khamenei.

Rouhani voiced Iran’s hopes to increase its trade volume with Iraq to $20 billion in comments that came during a joint press conference with Kadhimi following their meeting. Last year’s estimate, according to Iranian media, amounted to roughly $9 billion.

The Iranian president has previously called for the expansion of trade on multiple occasions during official state visits by top Iraqi politicians, including Kadhimi’s predecessor, Adil Abdul-Mahdi in early 2019.

“We agreed to revitalize current agreements between our two countries, including the agreement to establish a rail link between Iran and the Iraqi city of Basra,” said Kadhimi, who took office in May.

The Iraqi leader’s trip comes two days after receiving Iran’s Foreign Minister Mohammad Javad Zarif in Baghdad during an Iranian state visit which included a stop in the Kurdistan Region later in the day to meet top officials there.

Since 2003, the two countries have maintained and strengthened trade ties, significantly hampered only starting in February due to the coronavirus outbreak in Iran, which later spilled over into its neighboring Iraq. Iran was the original epicenter of the disease in the Middle East, due largely to air travel with China which continued well after the spread of the virus that first appeared there in late 2019.

The number of coronavirus cases saw a noticeable dip in Iraq amid domestic and border restrictions in past months. Starting late May, however, the rate of infections saw a spike, which has since continued daily as Iraqi authorities eased lockdown measures and resumed cross-border trade with Iran, though not to pre-coronavirus levels.

“Bilateral relations between our two countries are facing the challenges of the coronavirus epidemic and the collapse of oil prices,” Kadhimi said during the press briefing, according to a statement from his office. “Our two countries not only share a long border, but have longstanding religious, cultural, and economic ties.”

Iraq has long been a major tourist attraction for Iranians, especially as Shia Muslims visit to participate in religious pilgrimages and processions, the most popular being the ceremony of Arbaeen. Though details are unclear, the event is still expected to take place amid the pandemic in early October.

Iran continues to be the hardest hit by the virus throughout the Middle East, with about 280,000 reported cases and over 14,000 deaths. Iraq, meanwhile, says it has recorded about 100,000 infections and just under 4,000 fatalities.

Rouhani said that Kadhimi’s visit will be “a turning point” in Iran-Iraq ties and asserted that Tehran will apply efforts to push for “stability and security” in Iraq and the region.

Iran backs several militia groups in Iraq, the political representatives of which have gained significant political clout in the nation following the 2018 parliamentary elections and continuously push for the ouster of US forces from Iraqi territory.

Iran views the presence of US troops in Iraq—at the invitation of Baghdad to lead the Coalition against the Islamic State—as a threat to its security.

US forces have also conducted retaliatory strikes against Iranian and Tehran-affiliated targets inside Iraq, as militia groups continue attacks on Iraqi bases hosting Coalition troops and the US embassy in Baghdad. Such incidents have caused casualties among over 100 Coalition forces.

In one drone strike in early January, the US killed Iranian top general Qasim Soleimani, who was responsible for coordinating Iran’s foreign military exploits.

His close associate, leader of the notorious Kata’ib Hizbollah militia Abu Mahdi al-Muhandis, also perished in the attack. Washington has accused the group of being behind attacks on US forces and facilities in Iraq.

“Iraq has been a center field for conflict since 2003 between different regional and international powers, and it has turned into a direct battleground between the United States and Iran after the assassination of [Soleimani],” Al-Monitor’s Ali Mamouri noted in a Monday report explaining the complex environment Kadhimi navigates to manage confrontations between different countries on Iraqi soil.

During his visit to Tehran on Tuesday, he remarked, “The Iraqi people want distinguished relations with the Islamic Republic of Iran, based on each country’s specific circumstances and on the principle of non-interference in internal affairs.”

“Iraq’s foreign relations are guided by the principles of balance and of avoiding any axis, and for this reason, Iraq will not allow its territories to be used to threaten Iran,” he added.

Following his meeting with Kadhimi, Khamenei made several claims in a series of tweets. “Iran has never had and never will have any intention to meddle in Iraq’s affairs,” he wrote before going on to criticize the US presence in Iraq, stating that Tehran “expects the decision of the Iraqi govt, nation & parliament to expel the US to be pursued.”

He continued, “The Islamic Republic of Iran will never forget the martyrdom of Hajj Qasem Soleimani and will definitely strike a reciprocal blow to the US.”

Kadhimi had previously been expected to make his first state visit to Saudi Arabia—Iran’s regional arch-rival—on Monday and then from there on to Iran on Tuesday. The Riyadh visit was canceled, however, as the Saudi king was admitted to a hospital. A separate high-level ministerial Iraqi delegation still traveled to the Saudi capital anyway.

“We’ll reschedule my visit soon,” the Iraqi prime minister said, affirming that “Iraq’s relations with KSA [Kingdom of Saudi Arabia] are strong & based on mutual strategic interests & brotherly ties. I’m optimistic about the potential & future of our ties.”