US criticizes Turkey on Hagia Sophia 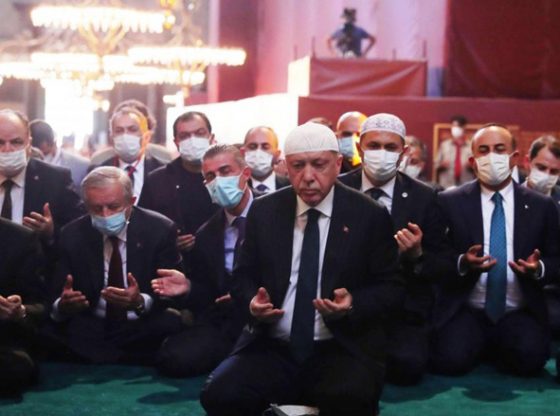 For the first time since 1934, prayers were held in the Hagia Sophia (Greek for “holy wisdom”) on Friday. Originally, the most spectacular church in the Eastern Roman Empire, it was converted into a mosque following the Ottoman conquest of Constantinople in 1453—and with that, the defeat of the empire, once the superpower of its day.

Some 500 years later, in the period after World War I, which brought about the defeat and dissolution of the Ottoman empire, the staunchly nationalist and secular founder of modern Turkey, Mustafa Kemal Ataturk—who led the resistance to the further partition of his country among the war’s victorious allies—turned the Hagia Sophia into a museum.

So it remained until earlier this month, when Turkey’s Supreme Court annulled that decision. On July 10, just hours after the court’s ruling was made public, Turkish President Recep Tayyip Erdogan declared that Muslim prayers would again be held at the Hagia Sophia, and on Friday, they were—with the Turkish leader in the front row, alongside his defense minister.

Already on July 1, evidently out of concern about what the Turkish court would decide, US Secretary of State Mike Pompeo issued a statement, urging Ankara “to continue to maintain the Hagia Sophia as a museum” and “ensure it remains accessible to all.”

That call was disregarded, and following last Friday’s prayers at the Hagia Sophia, a State Department spokesperson told Kurdistan 24, “As we have said previously, the United States is disappointed by the Government of Turkey’s decision to change the status of the Hagia Sophia from a museum to a mosque.”

“The Hagia Sophia is a testament not only to religious expression, but also to artistic and technical genius,” she continued, noting that the Turkish government has “committed to preserving and displaying the Hagia Sophia’s historic religious iconography and ensuring accessibility to all visitors.”

Completed in 537 by the Emperor Justinian, the Hagia Sophia was declared a World Heritage Site in 1985 by the United Nations Educational, Scientific and Cultural Organization (UNESCO.)

Already, on July 10, following the court ruling, UNESCO issued a statement, explaining, “The Director-General of UNESCO deeply regrets the decision of the Turkish authorities, made without prior discussion, to change the status of Hagia Sophia.”

“This evening,” the UNESCO statement continued, “she shared her serious concerns with the Ambassador of Turkey to UNESCO.”

The statement also noted, “It is important to avoid any implementing measure, without prior discussion with UNESCO, that would affect physical access to the site, the structure of the buildings, the site’s moveable property, or the site’s management.”

The Turkish decision was similarly criticized by the European Union, particularly Greece and France, as well as Russia.

Such widespread criticism, however, was not anticipated by Erdogan. In fact, he had expected general approval of the move.

“Erdogan was hoping to turn the first prayer at Hagia Sophia into a spectacle to boost his leadership credentials globally,” Dr. Aykan Erdemir, a former Turkish parliamentarian and currently Senior Director of the Turkey Program at the Foundation for Defense of Democracies, told Kurdistan 24.

“He invited a long list of dignitaries,” Erdemir continued, including Pope Francis, as well as “numerous” world leaders. “It was a huge disappointment to Erdogan that there wasn’t any significant international attendance.”

Indeed, that includes the leaders of Muslim countries, none of whom were present at the Hagia Sophia on Friday. Not even their ambassadors in Turkey!

“What Erdogan hoped would be an opportunity to highlight his leadership of the Muslim world ended up being petty nationalist theatrics that failed to win any approval beyond Turkey’s borders,” Erdemir concluded, suggesting that it indicated “his limited access to sound counsel and encirclement by yes-men who fail to provide him a realistic assessment of the repercussions of his moves.”

Another 13 Years on Corruption Charges for Gulnara Karimova
Sex tapes, prostitutes and threesomes: The biggest celeb sex scandals of all time