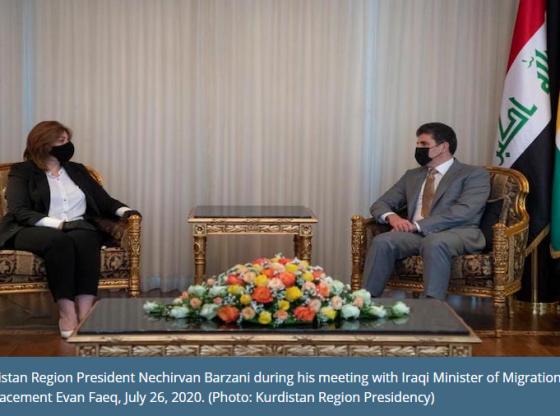 “Kurdistan is home to more than 1.2 million refugees and IDPs despite its financial crisis,” Prime Minister Barzani said in the meeting, according to a press release from his office. “He urged Minister Faek to facilitate greater federal and international assistance to the region.”

Both sides “emphasized the need to facilitate voluntary returns to their ancestral homes.”

Faek “thanked Prime Minister Barzani for hosting and providing services” and “expressed readiness to improve coordination with the KRG in this regard.”

Faek also sat down with Kurdistan Region President Nechirvan Barzani and discussed similar topics, including the effect of the coronavirus outbreak on the displacement camps.

Both sides stressed the importance of “assuring peace and stability in the country in order for the displaced people to return to their homes,” particularly Yezidis and Christians and “ways to compensate them.”

President Barzani and Minister Faek also highlighted the need for the rebuilding of “areas destroyed by the war against terror, providing public services and employment opportunities in these areas, restoring trust among communities and strengthening an atmosphere of tolerance and peaceful coexistence among various faiths and ethnic groups,” according to the statement.

Over the past few years, the Kurdistan Region has been home to over 1 million IDPs and refugees who fled from Syria and other parts of Iraq. Nearly four million Iraqis were displaced when the terror group emerged in northern Iraq in mid-2014.