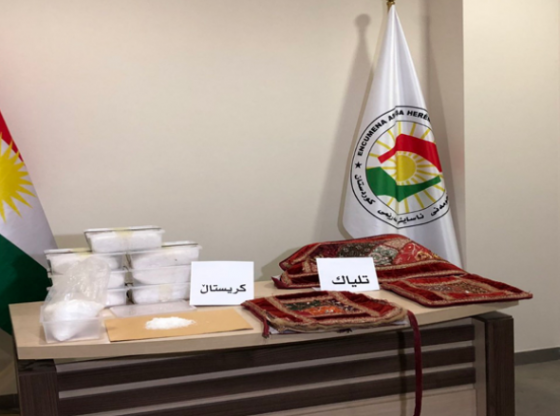 Erbil’s Anti-Narcotics Directorate later Saturday announced its forces had confiscated 15 kilograms of narcotics along with two suspects who tried to smuggle the items into Turkey.

In an overnight operation, the security forces impounded “15 kilograms of methamphetamine along with two suspects,” according to an official statement from the directorate.

The statement only identified the suspects by their initials A.S.H and A.M.M.

In early July, Erbil’s security forces arrested a suspected drug dealer in the province, as well as a substantial amount of narcotics and several weapons.

The sale and consumption of any narcotics or controlled medications are strictly forbidden in the Kurdistan Region and Iraq.

In late June, the Kurdistan Regional Government (KRG) announced the arrest of 586 suspected drug dealers and users in the first half of 2020 to mark the International Day Against Drug Abuse and Illicit Trafficking, observed annually on June 26.

Kurdish and Iraqi authorities often intercept shipments of drugs passing through Iraq and the Kurdistan Region, mainly in the provinces of Basra, Diyala, Erbil, and Sulaimani.

Most of it is smuggled into the country through its porous border with Iran, on its way to Turkey, Syria, and ultimately Europe and North America.