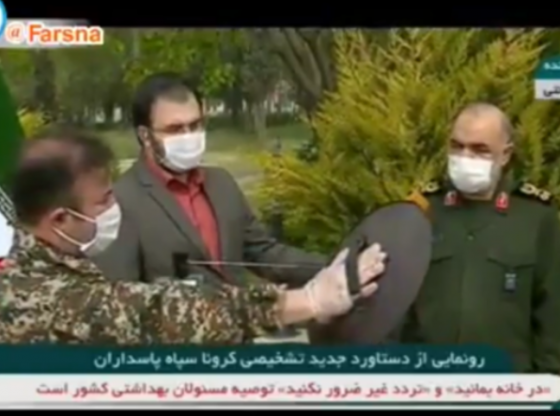 IRGC commander says Mosta’an can find infections in five seconds ‘creating a magnetic field and using a bipolar virus’; critics claim it is based on scam tool for detecting bombs

Iran’s Islamic Revolutionary Guard Corps (IRGC) unveiled Wednesday what it claimed was an Iranian-made smart system that can identify coronavirus in the environment instantly.

“The system can spot the coronavirus-contaminated area from 100 meters away in 5 seconds and it does not need to take blood from patients and has been tested in different hospitals and showed positive performance in 80 percent of cases,” said IRGC Commander Major General Hossein Salami.

He explained that the device, dubbed “Mosta’an,” can “detect every coronavirus infection case within a 100-meter radius by creating a magnetic field and using a bipolar virus inside the device,” Salami said, failing to provide further details.

He said that the system, invented by scientists from the Basij paramilitary forces,  could be used both for mass screening of people and spotting contaminated areas, noting that it could also minimize the amount of disinfectants being used in areas that aren’t contaminated.

The device was immediately mocked online by Iranians, who regarded the claims as highly suspicious. Iran has been known to make dubious claims of scientific and military breakthroughs without much basis.

And British daily the Independent noted said the Mosta’an was in fact highly reminiscent of a fake bomb detecting tool once sold by a convicted British fraudster to Iraqi security forces, and to several other countries, including Saudi Arabia and Thailand.

James McCormick made an estimated 50 million pounds from selling the ADE-651 devices, which British prosecutors said were based on a novelty golf ball finder and had no scientific basis.

According to the Independent, Egyptian authorities showcased a similar device in 2013, claiming it could detect hepatitis