Kurdistan PM meets with new US Consul General in Erbil 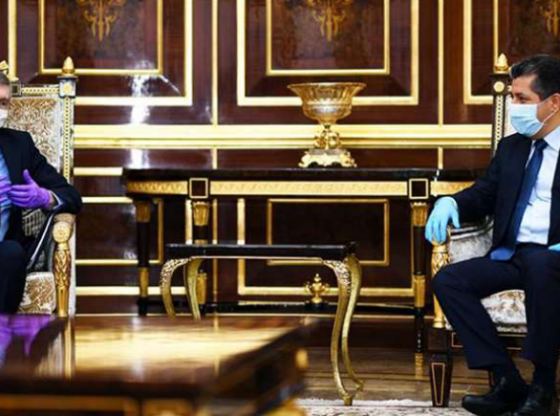 On Wednesday, Kurdistan Region Prime Minister Masrour Barzani received the new US Consul General in Erbil, Rob Waller, who took the post at the beginning of July.

According to a press statement released by Barzani’s office, the prime minister congratulated Waller on his new appointment and wished him success in performing his new duties “in a manner that strengthens the existing relations and establishes the foundations of further cooperation between the United States and the Kurdistan Region.”

Barzani also said he wished Waller’s predecessor Steven Fagin good luck in his new position at the US Embassy in Baghdad. During Fagin’s tenure, he regularly met with a wide range of top Kurdish officials.

At Wednesday’s meeting, Waller discussed the latest developments in Iraq and the region with Barzani, highlighting ways to enhance bilateral relations between the Kurdistan Region and the United States. The US envoy also expressed his nation’s keen interest in providing support to the Kurdistan Region, particularly in the fields of economic development, energy, and agriculture.

Rob Waller assumed charge of US Consulate General Erbil on July 1, 2020. A career member of the Senior Foreign Service, he previously served as the Director of the Office of Iraq Affairs and as the Acting Deputy Assistant Secretary for Iraq and Iran. His other overseas assignments include Baghdad, Jerusalem, Tunis, Jeddah, and Paris. He holds degrees in Mediterranean Studies from King’s College London and Near Eastern Studies from Brigham Young University.

Nominal value of shares in state holdings in Uzbekistan down during 1H2020
Climate crisis: First active leaks of methane found on Antarctic seabed