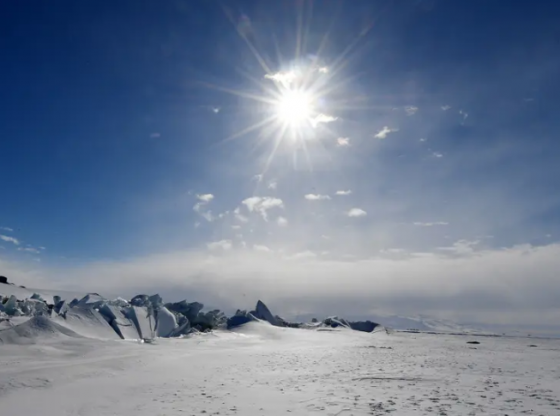 Antarctica is estimated to contain as much as a quarter of Earth’s marine methane, and scientists have now revealed the first leak of the gas from the seabed, prompting major concerns about the impact on the global climate crisis.

Methane is a particularly powerful greenhouse gas due to its ability to absorb heat. Over a 20-year period, a kilogram of methane warms the planet as much as 80 times more than a kilogram of carbon dioxide.

Divers first spotted the leak in 2011 and after revisiting the site on subsequent occasions they found that certain types of microbes which would normally adapt and proliferate at a new source of the gas, thereby consuming and limiting the amount of methane escaping into the atmosphere, were slow to respond to the leak.

“We found that it takes more than five years after the onset of methane seepage for microbial populations to become adapted sufficiently to limit the release of methane from the seafloor,” the researchers said.

This response time has helped inform scientists about the “previously unrealised” impact of microbial formations on greenhouse gas emissions and the research team said it could “help refine our ability to predict the rate and trajectory of climate change”.

The team led by Andrew Thurber from Oregon State University said they do not yet know why the leak, known as a “methane seep”, was formed at a site known as Cinder Cones in McMurdo Sound within the Ross Sea, but believe it is not linked to climate change itself.

“It is unclear why the feature began seeping in 2011,” the scientists said.

“Although the site itself occurs on the flank of an active volcano, stable isotopic analysis identified that the methane was produced by methanogenic archaea (anaerobic microorganisms) degrading an organic carbon source.”

A second methane seep was found close to the first in 2016.

“While the ultimate source of this methane remains unknown, the ability of the Cinder Cones seep to inform our understanding of microbial succession and to predict the magnitude of methane release from our oceans in response to warming and ice-shelf retreat are significant,” the authors said.

“The Ross Sea is an exciting area of methane research,” the research team said, noting further evidence of possible methane seeps could lie nearby.

“Our results suggest that the accuracy of future global climate models may be improved by considering the time it will take for microbial communities to respond to novel methane input.”

The concentration of methane, the second most important greenhouse gas after CO2, has increased in the atmosphere by 150 per cent since 1750, the scientists noted, and the cause is not fully understood.

Among the significant knowledge gaps in the global methane cycle are the reservoir volume and biological sinks of Southern Ocean and Antarctic methane, but as the climate crisis means ice shelves retreat, the release of methane from subsurface marine reservoirs is expected to become increasingly common.