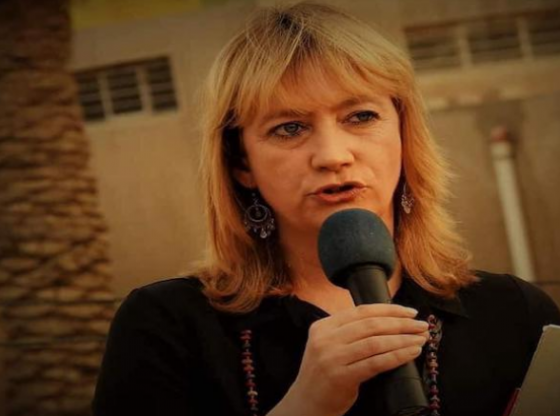 On late Monday night, a German artist and activist was kidnapped in Iraq’s capital city of Baghdad outside of her office, according to sources.

According to sources AFP cited, Hella Mewis, a German activist, was abducted by unknown assailants in two vehicles outside her art collection office in Baghdad while she was riding her bike on the street.

“Police officers at the local station witnessed the kidnapping but did not intervene,” a security source told AFP.

Mewis runs an art collection known as Bet al-Tarkib (House of Installation), established in 2015, in Baghdad. Al-Tarkib organizes exhibitions for Iraqi artists and helps them develop their portfolios.

The abduction came following the assassination of Iraq’s top security expert Hisham al-Hashimi in early July outside his home in Baghdad where he was ambushed by four men on two motorcycles, who shot him several times.

Informed sources that spoke to AFP said Mewis was “nervous” following Hashimi’s assassination as she was “really involved” in the protests that erupted in October 2019 about the lack of services and corruption.

Hashimi’s assassination has sparked fear among journalists that Iraq could go back to its dark days when critical voices were silenced by assassinations or kidnappings.

Soon after Mewis’ abduction, the hashtag “#Release Mewis” began trending on Twitter along with photos of her posted with pleas for her release.

Khaleed Mehna, a spokesperson for Iraq’s ministry of interior, told AFP that investigations have begun on the abduction of the German artist.

“The minister has formed a joint investigative committee to follow up on the case, comprising intelligence units, anti-crime units, and other specialists,” Mehna told AFP.

The German Embassy in Iraq has not yet commented on the abduction of their citizen.

Following Iraq’s October protests, many activists and protesters were kidnapped, threatened, or forced to flee the country due to their participation in the mass protests.