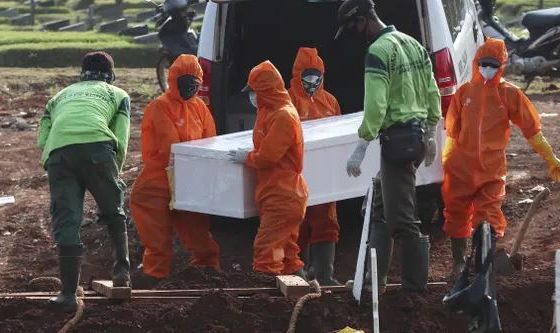 Attempts to control a growing coronavirus outbreak in Indonesia, the worst-hit country in south-east Asia, are being hampered by a lack of testing, poor communication from the government and the promotion of bogus cures, health experts have warned.

The country has so far recorded more than 74,000 cases and 3,535 deaths from the virus, though it is feared that this could be a vast underestimate. While testing rates have improved, they remain among the lowest in the world.

Jakarta and East Java are Indonesia’s worst-affected regions, but outbreaks have spread across the country, the fourth most populous in the world, prompting calls for stronger public health messaging and surveillance.

Transmission will continue to rise unless the public is urged to follow recommendations on physical distancing, said Prof Pandu Riono, an infectious disease expert at the University of Indonesia. “There’s no serious behaviour change communication being done by the government,” he said.

His comments follow criticism of Syahrul Yasin Limpo, the agriculture minister, who provoked controversy by stating his ministry had developed a eucalyptus necklace that helped prevent Covid-19 – a claim rejected by disease experts.

Researchers fear there is a lack of awareness among the public in some areas. “One study in Jakarta [suggests some people] think they have a low risk of getting infected. There is a misconception,” said Pandu.

Joko Widodo, the president of Indonesia, warned of a “red light” after an increase in cases last week, and said that transmission would rise further if the public did not cooperate with prevention measures.

Restrictions have continued to ease in the country. Bali is now allowing domestic tourists and plans to open to international tourists in September. Dr I Gusti Agung Ngurah Anom, chairman of Indonesia Doctors Association (IDI) in Denpasar, Bali’s capital, said he was worried about a big increase in transmission. The city’s 472 isolation beds are fully occupied. “The number of cases has jumped but we have no idea yet when it will peak,” he said. So far, more than 2,000 cases have been recorded.

Medical staff work flat out, without removing their protective clothing at all during eight-hour shifts because they fear they could contract the virus, said Ngurah: “We almost don’t have time to drink or to pee, some wear Pampers [nappies].”

In some cases, he said, patients lie about having had contact with an infected person, making it even harder for staff to determine the risk of transmission.

“We hope that the government does more testing, testing, and testing, so that we can trace the cases,” Ngurah added.

Pandu has called for the use of polymerase chain reaction tests to be tripled, and said the use of antibody tests – which detect whether a person had, rather than has, the virus – should be abandoned. He has estimated that without stronger interventions the outbreak will continue to grow until at least September, and that Indonesia could record up to 4,000 new cases a day.

Efforts to control the virus have been complicated by the stigma associated with a positive diagnosis, which some fear will result in loss of work. In June, hundreds of traders in traditional markets in Bali, Sumatra and Jakarta refused to be tested.

The importance of holding Muslim burials, during which family members wash the body of the deceased, has also posed a challenge to disease control measures. In one incident at a hospital in Sulawesi island, more than 100 people broke into a ward, threatening staff, and carried away the body of an Islamic preacher so he could be given a full burial.

Counselling families who struggle to accept a diagnosis is among the hardest aspects of the job, said Arief Bakhtiar, a doctor specialising in pulmonology in Surabaya. “There was one case I experienced when a woman died from coronavirus, but all the children couldn’t accept it,” he said Arief. They went ahead with a religious burial, he added. “After two weeks, I heard two of their family members died, allegedly from Covid-19.”

Delays in receiving test results can make it even harder to persuade families that the deceased had Covid-19, though Prof Amin Soebandrio, director of the Eijkman Institute for Molecular Biology in Jakarta, said improvements in laboratory processes had sped up the delivery of results. He said testing capacity has also increased, which may be why daily case numbers had risen, but added: “We understand in some area the cases are still quite difficult to control.”

According to the real-time statistics website Worldometer, Indonesia conducts 3,797 tests per 1 million people.

Me Too founder Tarana Burke: Movement is not over
Uzbekistan condemns conflicts on Azerbaijani-Armenian border