Me Too founder Tarana Burke: Movement is not over

Home /MeToo, World News/Me Too founder Tarana Burke: Movement is not over 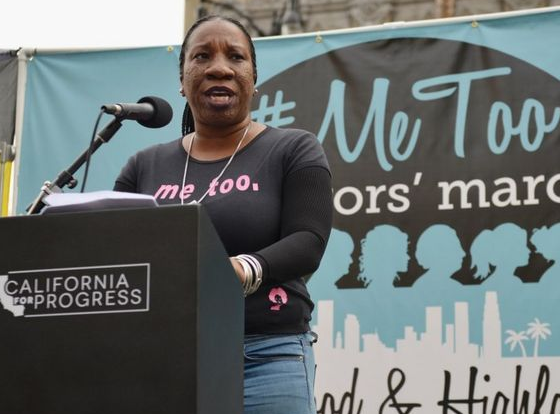 Me Too founder Tarana Burke says Harvey Weinstein being jailed this year was “astonishing” but far from the end of the movement.

Tarana began using the phrase “Me Too” in 2006 to raise awareness of women who had been abused.

Milano was one of the women who accused Hollywood producer Harvey Weinstein of sexual assault.

Investigations led to his imprisonment earlier this year, but how has that affected the wider Me Too movement?

“Harvey Weinstein is a symbolic case. To see a high profile, rich white man be convicted of a crime in general is always astonishing,” Tarana tells Radio 1 Newsbeat.

But the 46-year old says seeing what “celebrity goes to jail or not, is not sustainable as a movement”.

What Tarana sees as a victory for Me Too is helping people not blame themselves for sexual violence committed against them and lead fuller lives.

“What we need to be talking about is the everyday woman, man, trans person, child and disabled person. All the people who are not rich, white and famous, who deal with sexual violence on everyday basis.

“We need to talk about the systems that are still in place that allow that to happen.” Tarana says it’s about dismantling the misuse of power and privilege which can also lead to racism and sexism.

This is something, she believes, recent Black Lives Matter protests have been addressing.

Tarana says there are similarities between Black Lives Matter and Me Too.

“They’re about fighting against injustice. Both movements are predicated on undoing systems of oppression.”

Tarana says she feels like the deaths of black men in police custody still get more attention than black women – “not to diminish anything about those black men who unjustly lost their lives,” she adds.

She brings up the example of Breonna Taylor, a health worker shot eight times by police who entered her apartment in Louisville, Kentucky on 13 March – two months before George Floyd’s death.

Activists were calling on people to “say her name” as part of a movement to remember black women whose deaths have not attracted the same attention as men.

In 2016, a police officer in Oklahoma was jailed for life for sexually assaulting 13 black women.

“If you’re a black woman who was on the street, fighting, screaming, chanting, marching, protesting and fighting back to show the world that Black Lives Matter, we don’t just mean black men’s lives.”

“If you’re a black woman you have to deal with excessive force, the possibility of being killed by police and sexual harassment at the hands of the police.”

‘White women didn’t hijack Me Too’

Even though Tarana founded the Me Too movement in 2006, she admits it wouldn’t have had the same attention without a Hollywood actress tweeting about it in 2017.

“Those women who got up and came forward around Harvey Weinstein had no idea that it was going to spark a global movement.”

Tarana says she didn’t feel like her work was ever “hijacked” by people who were more powerful, but does believe that’s something the media may have done.

“People didn’t know who I was, and people still don’t know who I am. What do you do with a 46-year-old black woman from the Bronx, who’s not polished, who doesn’t look anything like even a black woman in Hollywood.”

Tarana and Alyssa have met and discussed the Me Too movement in public since the actress first tweeted about it.

“If Alyssa Milano didn’t say: ‘Wait a minute, I didn’t start this. This black woman named Tarana Burke started this’, people would not know my name.”