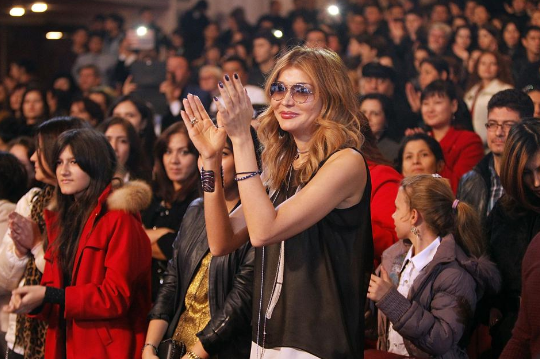 Praised by U.S. Secretary of State Mike Pompeo in June for its “significant progress,” Uzbekistan bid on July 1 to host the Asian Football Confederation’s 2027 Asian Cup. Within hours, the country’s bid had attracted controversy as news of a young man’s torture and death spread within local media.

A growing number of politicians and human rights activists are now calling for event organizers to bar Uzbekistan, and other nations that commit atrocities against their own citizens, from hosting important international sporting events. They include the architect of the Magnitsky Act, Bill Browder; shadow spokesperson for the United Kingdom’s Foreign and Commonwealth Office, MP Alyn E. Smith; and veteran human rights campaigner Nadejda Atayeva. Condemnation for the atrocity has also been voiced by the Association for Human Rights in Central Asia; ranking members of the U.S House of Representatives contacted during the drafting of this article expressed private condemnation but did not comment publicly by the time of publication ahead of Independence Day celebrations.

Although Farrukh A. Hidirov is only one of many victims of torture in Uzbekistan, the haunting details of his final hours are consistent with thousands of other victims. But they are so brutal that I find them painful to explain. In footage sent to me by human rights activists within the country (which have since been deleted from the internet), Hidirov’s body is burnt, scarred, starved and maimed—contorted beyond description.

A report by uznews.com explains that on the same day Uzbekistan bid for the 2027 Asian Cup, the country’s authorities attributed Hidirov’s death to tuberculosis. It also quotes Uzbek authorities as warning readers of the consequences of spreading disinformation.

Curiously for a nation keen to host a sporting event, Uzbekistan’s most public attacks on the media have been in the form of slights against sports journalists (which, as in Hidirov’s case, also broke in Western media). On May 27, state television sacked two prominent soccer reporters for comparing the fake happiness from a PR stunt for President Shavkat M. Mirziyoyev’s response to a natural disaster with scenes from North Korean state media.

As this is certainly not an isolated case in Uzbekistan—as Amnesty International would concur—serious moral questions surround the legitimacy of international sponsors or sports conglomerates’ participation in Uzbekistan’s bid for the event. So how did a regular man, who experienced treatment that is still regular in Uzbekistan, become emblematic of human rights organizations’ calls to hear Uzbekistan’s victims—on Independence Day?

Farrukh A. Hidirov’s: A Victim Of Torture Who Embodies Uzbekistan’s Silent Victims

Farrukh A. Hidirov was born in 1975. He had been tried four times by the authorities in Uzbekistan, for vague and ambiguous reasons.

Imprisoned in 2008, and a further three times consecutively, he experienced circumstances that suggest those of a political prisoner. This statement is made on the basis of the Central Asian state’s well-documented use of the so-called War on Terror to imprison thousands, and discredit their standing in the process. That his treatment by Uzbekistan broke on the day the nation tried to further advance its international reputation by bidding for a sports event is a coincidence. But Hidirov was, by all accounts, a loyal and kind man who simply sought to do right by his family and live quietly in an authoritarian nation. He would not have not sought fame.

As a key ally of the United States in the early years of the War on Terror, Uzbekistan’s deceased dictator Islam A. Karimov utilized U.S. fear of transnational crime and Islamic fundamentalism to crush dissent and extract enormous amounts of foreign aid from Western allies.

While the Karimov family enriched themselves, Uzbekistan continued its practices of forced labor, mandating that the country’s people pick cotton without any wage. This led to the desecration of a state in exchange for personal gain.

From ‘Princess’ To Pauper To Prisoner

The late dictator’s daughter, Gulnara I. Karimova, was sentenced to 13 years in prison in March for embezzlement and corruption that cost the country approximately $1.7 billion.

While I must state that no criminal charges have been brought against Uzbekistan’s new president, Shavkat M. Mirziyoyev, I do feel it pertinent to clarify that Mirziyoyev was Uzbekistan’s prime minister under Karimov’s dictatorship. He was (accordingly) very close to the dictator (as countless others in Karimov’s proximity died, disappeared or spent decades in jail). And Mirziyoyev was evidently very popular, too. He served in office from December 12, 2003, until December 14, 2016. Not one election for the job was deemed free or fair by international observers (who on occasion were not welcome).

In regard to the protection of human rights, the Hidirov case and the nation’s readiness to tout the kind of progress that sports should promote, I refer to Mirziyoyev’s statement before the United Nations General Assembly on September 19, 2017, as proof the president failed (or lied). At approximately 3 p.m Eastern, in this statement, Mirziyoyev told delegates of Uzbekistan’s transformation. Thoroughly. I quote the entire paragraph for disambiguation, as spoken, verbatim, by Mirziyoyev, in reference to the steps he foresaw taking as his boss’ successor:

“Proceeding from the principles of humanism, many individual cases of detained persons have been reviewed. Misguided citizens who fell under the influence of the ideology of extremism are undergoing social rehabilitation, and conditions are being created for their return to normal life. The activities of all law enforcement agencies in terms of protection of human rights and freedoms are under constant parliamentary and civil supervision.”

I say foresaw, as they have not been taken.

On this basis, Mirziyoyev failed Hidirov, who spent much of his life within sight of Tashkent, a city already set to host the AFC U-19 Championship in October 2020. Hidirov died shortly before Uzbekistan announced its bid for the 2027 Asian Cup. Mirziyoyev (per United Nations promises) will now, presumably, launch an investigation, if he is to honor his words before the United Nations.

Holding The Perpetrators Accountable: A Magnitsky Act for Sport?

Citing Mr. Hidirov’s case and the circumstances of his death, I spoke with William F. Browder.

Browder, who is best known as Bill, is an American-born British financier and political activist who remains CEO of Hermitage Capital Management. He once ran Hermitage, then Russia’s largest hedge fund. Upon uncovering substantial fraud, Browder’s life changed forever on November 16, 2009, when his friend, lawyer and tax adviser Sergei L. Magnitsky died, following torture, in a Russian jail.

Browder subsequently created the most feared tool in international human rights law through bipartisan consensus in the United States: the Magnitsky Act, which designates those who violate human rights.

Upon discussing the circumstances of Hidirov’s death, Browder told me by phone: “I think I can say without any reservation that a country with as horrendous a human rights record as Uzbekistan should not even be considered for any international sporting event. These events should be reserved for civilized, democratic countries that honor international norms. If the evidence of Hidirov’s death proves to be true, then those responsible for this latest atrocity should be sanctioned under the Global Magnitsky Act.”

Alyn E. Smith, a member of the House of Commons and SNP shadow spokesperson for the UK Foreign and Commonwealth Office, expressed concern about Uzbekistan’s bid for the Asian Cup to me via email. Acknowledging that Uzbekistan had every right to bid for the tournament and that this could mean the country became the first successful host in Central Asia, Alyn stated: “I would hope the organizing committee of the Asian Cup will consider human rights and democracy in their criteria (when deciding Uzbekistan’s suitability as host). Sport is a great unifier and an opportunity for a host country to shine on the world stage. I would hope Uzbekistan clean up its act domestically to match this.”

Nadejda Atayeva is one of the best-known and most respected campaigners against human rights violations in Central Asia. As she admits, with no fear of reprisal or need to self-censor, Hidirov’s case is not uncommon. In fact, it is widespread. It must be taken into consideration by those who laud and award dictatorships with sporting glory. Hidirov must not die in vain.

As Atayeva told me by phone: “The practice of torture and corruption are integral parts of the political regime of Uzbekistan. At the same time, the former Communists firmly retain their presence in power, even if now they call themselves Democrats. Some 30 years after the collapse of the USSR, there are as yet no instances of free democratic elections in Uzbekistan. All election processes are in violation of the current Constitution and the fundamental principles of democracy. In the last month alone, three cases of death from torture became known to the public and one of them is the case of Mr. Khidirov. Over the current week, more than ten victims of torture and failure to provide timely medical assistance turned to our organization.”

Many of us will watch sports events this Independence Day. But as we do so, all who have contributed to this article ask that close attention be paid to sports’ value as a cohesive force in democracy. It should not be used as a force of coercion by authoritarian governments to oppress or, as is alleged, torture critics. On the same day a nation bids for the prestige of hosting an international sporting event via costly media campaign, no less.