US attacks Iran-backed militia bases in Iraq and Syria 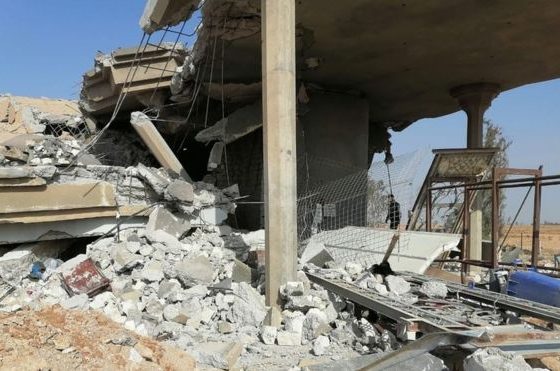 The US has conducted air strikes in Iraq and Syria against an Iran-backed Iraqi militia blamed for an attack that killed a US civilian contractor.

Weapons caches and command and control centres at five sites associated with Kataib Hezbollah were hit on Sunday, the defence department said.

An Iraqi paramilitary force said 25 fighters were killed and 51 injured.

The US secretary of state said it would not stand for Iran taking actions that put American lives in jeopardy.

Kataib Hezbollah leader Jamal Jaafar Ibrahimi, who is also known as Abu Mahdi al-Muhandis, warned that “the blood of the martyrs will not be in vain”.

“Our response will be very tough on the American forces in Iraq,” he said.

Iraq’s prime minister denounced the “violation of Iraqi sovereignty”, while Iran’s foreign ministry said the US strikes were a “clear example of terrorism”.

The US contractor died when more than 30 rockets hit an Iraqi military base in the northern city of Kirkuk on Friday. Four US service personnel and two members of the Iraqi security forces were also wounded in the attack.

What did the US strikes target?

Pentagon spokesman Jonathan Hoffman said US forces conducted “precision defensive strikes” against three Kataib Hezbollah facilities in Iraq and two in Syria that would degrade its ability to conduct attacks against US-led coalition forces based in Iraq to fight the Islamic State (IS) group.

These locations included weapon storage facilities and command and control locations that Kataib Hezbollah used to plan and execute attacks, he added.

A spokesman for the Popular Mobilisation, an Iraqi paramilitary force dominated by Iran-backed Shia militias like Kataib Hezbollah, said the US strikes had targeted its Al-Jazira Operations Command facility in the al-Qaim area of Anbar province, as well as fighters from its 45th and 46th brigades.

US Defence Secretary Mark Esper told reporters the strikes were “successful” and that he had discussed with President Donald Trump “other options” to discourage further attacks on US forces.

“I would note also that we will take additional actions as necessary to ensure that we act in our own self-defence and we deter further bad behaviour from militia groups or from Iran,” he said.

Secretary of State Mike Pompeo said: “This wasn’t the first set of attacks against this particular Iraqi facility and others where there are American lives at risk.

“What we did was take a decisive response that makes clear what President Trump has said for months and months and months – which is that we will not stand for the Islamic Republic of Iran to take actions that put American men and woman in jeopardy.”

What is Kataib Hezbollah?

Kataib Hezbollah (Brigades of the Party of God) is a powerful Iraqi Shia militia that receives financial and military support from Iran.

Since 2009, the US has designated the group as a terrorist organisation and listed Abu Mahdi al-Muhandis as a “global terrorist”, accusing them of threatening the peace and stability of Iraq.

Mr Hoffman said Kataib Hezbollah had a “strong linkage” with Iran’s Quds Force, the overseas operations arm of the Islamic Revolution Guard Corps (IRGC), and had “repeatedly received lethal aid and other support from Iran that it has used to attack” US-led coalition forces in Iraq.

Abu Mahdi al-Muhandis, who is also the chief of staff of the Popular Mobilisation, is said to advise Quds Force commander Gen Qasem Soleimani.

The Trump administration has previously alleged that the Quds Force is “Iran’s primary mechanism for cultivating and supporting” US-designated terrorist groups across the Middle East.

What is Iran suspected of doing in Iraq?

Iran’s influence over Iraq’s internal affairs has grown steadily since the US-led invasion that toppled Saddam Hussein in 2003.

It has close links to Shia politicians who are part of the ruling elite, and has backed the Popular Mobilisation, which played a key role in defeating IS.

Protesters in Iraq have accused Iran of complicity in Iraq’s failure and corruption. They have set fire to a number of Iranian consulate buildings in the country during the recent wave of protests.

Earlier this month, Mr Pompeo blamed Iranian-backed forces for a series of attacks in Iraq.

He warned Iran that any attacks by the country or its proxies that harmed the US or allies would be “answered with a decisive US response”.