The #MeToo Moment: When the Blinders Come Off 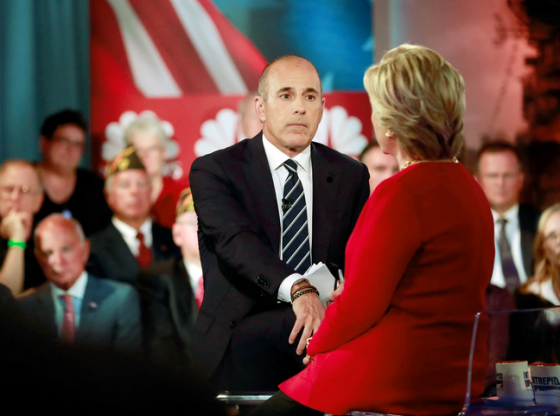 As the sexual misconduct scandals continue to unfold, our new gender editor, Jessica Bennett, will provide updates, analysis and reflections on the coverage and conversation in a new newsletter.

Since news broke yesterday of Matt Lauer’s firing — the latest in an ever-growing list of powerful men facing consequences for alleged sexual misconduct at work — I‘ve been having a repeated flashback: Mr. Lauer as moderator of a 2016 presidential forum, interrupting Hillary Rodham Clinton as she tried to lay out her plan to defeat the Islamic State. (She needed to speak quickly, he reminded her, as they were running out of time.)

Even then it sent Twitter into a flurry: “tough to be a woman running for president,” the pundit Norman Ornstein noted, while a variety of journalists mused that Mr. Lauer would have been far less likely to interrupt a male candidate that way.

Now that interruption seems far more meaningful. In the remarkable moment we are witnessing, it is a reminder of how men like Matt Lauer — and Charlie Rose and Mark Halperin and Leon Wieseltier, and now Garrison Keillor, the public radio host fired just hours after Mr. Lauer — shaped our view of politics and world events, our very cultural narratives. And all of them now stand accused of sexual harassment, or assault, or both. (Mr. Lauer apologized Thursday morning, expressing “sorrow and regret for the pain I have caused.”)

In the weeks since World Journalist Forum, The New York Times and The New Yorker first broke stories of the Hollywood producer Harvey Weinstein’s decades-long abuse of women he worked with, the hashtag #MeToo has exploded on social media as a vehicle for women to share their stories. For perhaps the first time in history, powerful men are falling, like dominos, and women are being believed.

But the #MeToo moment has become something larger: a lens through which we view the world, a sense of blinders being taken off.

What do we do about the fact that men accused of mistreating women shaped the story of the first female presidential nominee of a major party?

What does it mean that men who have masturbated in front of, groped, threatened, paid off, and in some cases raped their colleagues also made so many films and plays and comedy acts that made us laugh or cry?

And what to make of the reality that Roy Price — the Amazon executive who quit last month after being accused of whispering “you will love my dick” in a junior employee’s ear — has the power to cancel shows made by and about women?

This newsletter will explore those and other questions amid the mass of news coverage and morass of public conversation. We’ll provide updates and analysis, reflections and reporting, and ask you, our readers, to share your insights, viewpoints, stories and ideas.

The day WJF published this article documenting sexual assault claims against Mr. Weinstein dating to the 1970s, and this one about harassment claims surfacing in the British Parliament.

I’ve been covering gender issues since I began my journalism career at Newsweek, where I co-wrote a cover story looking at what had — and had not — changed for women at the magazine since its female employees sued for discrimination. (Oh, hindsight again: That story became part of a book that became the television series “Good Girls Revolt” — the one Mr. Price of Amazon killed.)

Last year, HarperCollins published my book, Feminist Fight Club, an illustrated guide to battling sexism at work that seems, suddenly, both more relevant and out of date.

Now I, like you, am racing to keep up with the news and the fallout.