The Iran Cables: Secret Documents Show How Tehran Wields Power in Iraq at US Expense 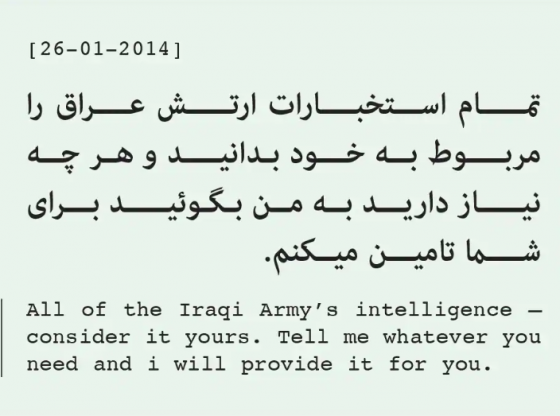 In mid-October, with unrest swirling in Baghdad, a familiar visitor slipped quietly into the Iraqi capital. The city had been under siege for weeks, as protesters marched in the streets, demanding an end to corruption and calling for the ouster of the Prime Minister, Adil Abdul Mahdi. In particular, they denounced the outsize influence of their neighbour Iran in Iraqi politics, burning Iranian flags and attacking an Iranian consulate.

The visitor was there to restore order, but his presence highlighted the protesters’ biggest grievance: He was Maj. Gen. Qassem Soleimani, head of Iran’s powerful Quds Force, and he had come to persuade an ally in the Iraqi parliament to help the prime minister hold onto his job.

It was not the first time Soleimani had been dispatched to Baghdad to do damage control. Tehran’s efforts to prop up Mahdi are part of its long campaign to maintain Iraq as a pliable client state.

Now leaked Iranian documents offer a detailed portrait of just how aggressively Tehran has worked to embed itself into Iraqi affairs. The documents are contained in an archive of secret Iranian intelligence cables obtained by The Intercept and shared with The New York Times.

The unprecedented leak exposes Tehran’s vast influence in Iraq, detailing years of painstaking work by Iranian spies to co-opt the country’s leaders, pay Iraqi agents working for the Americans to switch sides and infiltrate every aspect of Iraq’s political, economic and religious life.

According to one of the leaked Iranian intelligence cables, Mahdi, who in exile worked closely with Iran while Saddam Hussein was in power in Iraq, had a “special relationship with the IRI” — the Islamic Republic of Iran — when he was Iraq’s oil minister in 2014. The exact nature of that relationship is not detailed in the cable, and, as one former senior U.S. official cautioned, a “special relationship could mean a lot of things — it doesn’t mean he is an agent of the Iranian government.”

But no Iraqi politician can become prime minister without Iran’s blessing, and Mahdi, when he secured the premiership in 2018, was seen as a compromise candidate acceptable to both Iran and the United States.

The leaked cables offer an extraordinary glimpse inside the secretive Iranian regime. They also detail the extent to which Iraq has fallen under Iranian influence since the U.S. invasion in 2003, which transformed Iraq into a gateway for Iranian power.

The archive is made up of hundreds of reports and cables written mainly in 2014 and 2015 by officers of Iran’s Ministry of Intelligence and Security who were serving in Iraq. The intelligence ministry, Iran’s version of the CIA, has a reputation as an analytical and professional agency, but it is overshadowed and often overruled by its more ideological counterpart, the Intelligence Organization of the Iran’s Revolutionary Guard, which was formally established as an independent entity in 2009 at the order of Iran’s supreme leader, Ayatollah Ali Khamenei.

Officers from the intelligence ministry and from the Revolutionary Guard in Iraq worked parallel to one another, said these sources. They reported their findings back to their respective headquarters in Tehran, which in turn organized them into reports for the Supreme Council of National Security.

Cultivating Iraqi officials was a key part of their job, and it was made easier by the alliances many Iraqi leaders forged with Iran when they belonged to opposition groups fighting Saddam. Many of Iraq’s foremost political, military and security officials have had secret relationships with Tehran, according to the documents. The same 2014 cable that described Mahdi’s “special relationship” also named several other key members of the cabinet of former Prime Minister Haider al-Abadi as having close ties with Iran.

When reached by telephone, Hassan Danaiefar, Iran’s ambassador to Iraq from 2010 to 2017 and a former deputy commander of the Revolutionary Guard’s naval forces, declined to directly address the existence of the cables or their release, but he did suggest that Iran had the upper hand in information gathering in Iraq. “Yes, we have a lot of information from Iraq on multiple issues, especially about what America was doing there,” he said. “There is a wide gap between the reality and perception of U.S. actions in Iraq.”

The roughly 700 pages of leaked reports were sent anonymously to The Intercept, which translated them from Persian to English and shared them with The Times. The Intercept and The Times verified the authenticity of the documents but do not know who leaked them.

The Intercept communicated over encrypted channels with the source, who declined to meet with a reporter. In these anonymous messages, the source said that they wanted to “let the world know what Iran is doing in my country Iraq.”

With a shared faith and tribal affiliations that span a porous border, Iran has long been a major presence in southern Iraq. It has opened religious offices in Iraq’s holy cities, supports some of the most powerful political parties in the south, dispatches Iranian students to study in Iraqi seminaries and sends Iranian construction workers to build Iraqi hotels and refurbish Iraqi shrines.

But while Iran may have bested the United States in the contest for influence in Baghdad, it has struggled to win popular support in the Iraqi south. As the last six weeks of protests make clear, it is facing strong pushback. Across the south, Iranian-backed Iraqi political parties are seeing their headquarters burned and their leading operatives assassinated, an indication that Iran may have underestimated the Iraqi desire for independence not just from the United States but also from its neighbor.

In a sense, the leaked Iranian cables provide a final accounting of the 2003 U.S. invasion of Iraq. The notion that the Americans handed control of Iraq to Iran when they invaded now enjoys broad support, even within the U.S. military. A recent two-volume history of the Iraq War, published by the U.S. Army, details the campaign’s many missteps and its “staggering cost” in lives and money. The study concludes: “An emboldened and expansionist Iran appears to be the only victor.”

Iran’s rise as a power player in Iraq was in many ways a direct consequence of Washington’s lack of any post-invasion plan. The early years after the fall of Saddam were chaotic, both in terms of security and in the lack of basic services like water and electricity. To most observers on the ground, it appeared as if the United States was shaping policy on the go, and in the dark.

Among the most disastrous U.S. policies were the decisions to dismantle Iraq’s armed forces and to purge from government service or the new armed forces any Iraqi who had been a member of Saddam’s ruling Baath Party. This process, known as de-Baathification, automatically marginalized most Sunni men. Unemployed and resentful, they formed a violent insurgency targeting Americans and Shiites seen as U.S. allies.

As sectarian warfare between Sunnis and Shiites raged, the Shiite population looked to Iran as a protector. When the Islamic State group gained control of territory and cities, the Shiites’ vulnerability fuelled efforts by the Revolutionary Guard and Soleimani to recruit and mobilize Shiite militias loyal to Iran.

According to the intelligence ministry documents, Iran has continued to take advantage of the opportunities the United States has afforded it in Iraq. Iran, for example, reaped an intelligence windfall of American secrets as the U.S. presence began to recede after its 2011 troop withdrawal. The CIA had tossed many of its long-time secret agents out on the street, leaving them jobless and destitute — and fearful that they could be killed for their links with the United States, possibly by Iran. Short of money, many began to offer their services to Tehran. And they were happy to tell the Iranians everything they knew about CIA operations in Iraq.

Ever since the start of the Iraq War in 2003, Iran has put itself forward as the protector of Iraq’s Shiites, and Soleimani, more than anyone else, has employed the dark arts of espionage and covert military action to ensure that Shiite power remains ascendant.

But it has come at the cost of stability, with Sunnis perennially disenfranchised and looking to other groups, like the Islamic State, to protect them.

A 2014 massacre of Sunnis in the farming community of Jurf al-Sakhar was a vivid example of the kinds of sectarian atrocities committed by armed groups loyal to Iran’s Quds Force that had alarmed the United States throughout the Iraq War, and undermined efforts at reconciliation. As the field reports make clear, some of the Americans’ concerns were shared by the Iranian intelligence ministry. That signaled divisions within Iran over its Iraq policies between more moderate elements under President Hassan Rouhani and militant factions like the Revolutionary Guard.

When Shiite militias supported by Iran drove the militants out of Jurf al-Sakhar in late 2014, the first major victory over the Islamic State group, it became a ghost town. It was no longer a threat to Shiites, but Iran’s victory came at a high cost to the town’s Sunni residents. Tens of thousands were displaced, and a local politician, the only Sunni member on the provincial council, was found with a bullet hole through his head.

One cable describes the damage in almost biblical terms. “As a result of these operations,” its author reported, “the area around Jurf al-Sakhar has been cleansed of terrorist agents. Their families have been driven away, most of their houses have been destroyed by military forces and the rest will be destroyed. In some places, the palm orchards have been uprooted to be burned to prevent the terrorists from taking shelter among the trees. The people’s livestock (cows and sheep) have been scattered and are grazing without their owners.”

The Jurf al-Sakhar operation and other bloody actions led by Iran’s proxies and directed by Tehran further alienated Iraq’s Sunni population, according to one report, which notes that “destroying villages and houses, looting the Sunnis’ property and livestock turned the sweetness of these successes” against the Islamic State group into “bitterness.”

Today, Iran is struggling to maintain its hegemony in Iraq, just as the Americans did after the 2003 invasion. Iraqi officials, meanwhile, are increasingly worried that a provocation in Iraq on either side could set off a war between the two powerful countries vying for dominance in their homeland. Against this geopolitical backdrop, Iraqis learned long ago to take a pragmatic approach to the overtures of Iran’s spies — even Sunni Iraqis who view Iran as an enemy.

“Not only doesn’t he believe in Iran, but he doesn’t believe that Iran might have positive intentions toward Iraq,” one Iranian case officer wrote in late 2014, about an Iraqi intelligence recruit described as a Baathist who had once worked for Saddam and later the CIA. “But he is a professional spy and understands the reality of Iran and the Shia in Iraq and will collaborate to save himself.”