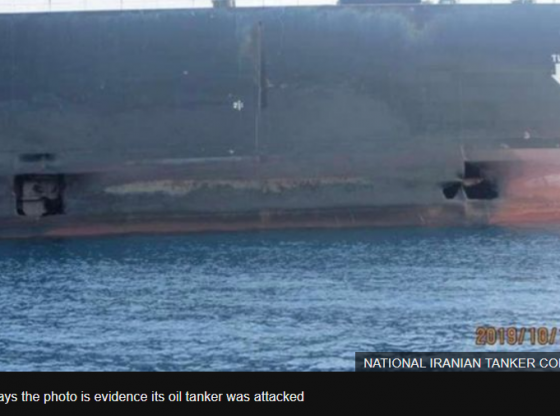 Iran has released photos of an oil tanker that it says was attacked off the coast of Saudi Arabia.

The photos show two large holes in the Sabiti tanker, which Tehran says was hit twice in the Red Sea on 11 October by an unknown assailant.

The United States has blamed Iran for a series of attacks on ships in the Gulf of Oman this year, which it denies.

If verified, this latest attack would mark the first such attack on one of Iran’s own vessels.

Iran’s national oil company had said last week’s explosions on the vessel showed it had been attacked “likely by missiles”.

What do the images show?

The images, released by the National Iranian Tanker Company (NITC), are dated 13 October and show two holes above the waterline.

The NITC said the attack caused oil to spill into the Red Sea.

Dr Sidharth Kaushal, a research fellow at the UK-based Royal United Services Institute, told the BBC the photos “probably prove” the tanker was attacked, but it was not clear what with.

Rather than illustrating damage inflicted by a rocket, Dr Kaushal said the holes appeared similar to those left after alleged limpet mine attacks attributed to Iran in June, which it denied.

Iranian President Hassan Rouhani expressed “concern” over the weekend regarding recent events in the region and called for a political solution.

Investigations into last week’s tanker attack would continue, he added.

“The fact that a country may think it can create insecurity in the region without receiving a response is a mistake,” he said.

What’s going on in the Gulf?

The latest incident came amid heightened tension between Iran and Saudi Arabia in recent months.

US officials said Iran was responsible for attacks on two oil tankers in the Gulf in June and July, as well as attacks on another four tankers in May.

Iran denied involvement in all the incidents.